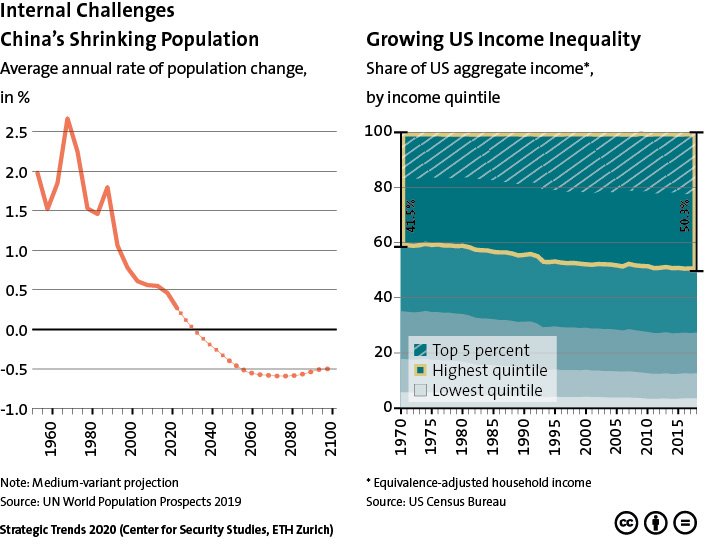 China and the US may be economic superpowers, but they are both facing significant internal challenges. As an example of these challenges, this graphic points out how China’s annual population rate is rapidly shrinking, while in the US income inequality is growing.

For more on China, the US and the world order, read Jack Thompson’s Strategic Trends 2020 chapter here.

SEOUL – If you chase two rabbits at once, the old saying goes, both will escape. And yet this is precisely what many governments are required to do: pursue both growth and distributional fairness. The two objectives, though not incompatible, are entirely different from one another, and few policy tools can simultaneously help to achieve both.This idea matters a lot in trade policy. Much theoretical and empirical research demonstrates that opening trade can spur a country’s GDP growth. But increasing a pie’s size does not guarantee that it will be shared fairly.

Often, the incremental growth that comes with a trade opening is unevenly shared; moreover, in many cases, some receive a smaller share than they did before. Here is where government must intervene using its traditional tools, taxation and redistribution, as well as complementary policies such as social safety nets and adjustment assistance.

END_OF_DOCUMENT_TOKEN_TO_BE_REPLACED

A UNICEF report titled “The Children Left Behind”, to be released today, examines the level of inequality in the education, well-being and health of children in the world’s richest countries. The countries with the least inequality were the usual lot: Iceland, Finland, the Netherlands and Norway.

While Finland, for example, tops the list in terms of having the most equal education system, it fares less well on the health front. Despite free and healthy school meals, Finnish media decried, Finnish children are still not eating enough vegetables and fruit. Switzerland, somewhat unsurprisingly, tops the list as the country with the highest level of material well-being for kids. While Canadian authorities and media reacted with shock at how badly off Canadian children are in terms of material well-being and health, the US ranks even far below its northern neighbor (near the bottom of 24 OECD countries under scrutiny). This should ruffle some feathers in the US and show how vulnerable children in particular are to societal inequality. Sadly, given the intensely polarized political environment, this important report is likely to get buried under a myriad of apparently much more urgent policy concerns.

Yet, the US, like any other wealthy nation not only owes its children a good standard of living from a moral standpoint, but also has to provide it in order to compete in tomorrow’s increasingly crowded knowledge economy in which a pool of healthy, smart and motivated young people is a prerequisite for success. Inequality, ill-health and resentment will hamper growth and make countries less dynamic and less competitive, regardless of their relative ranking in the world today.