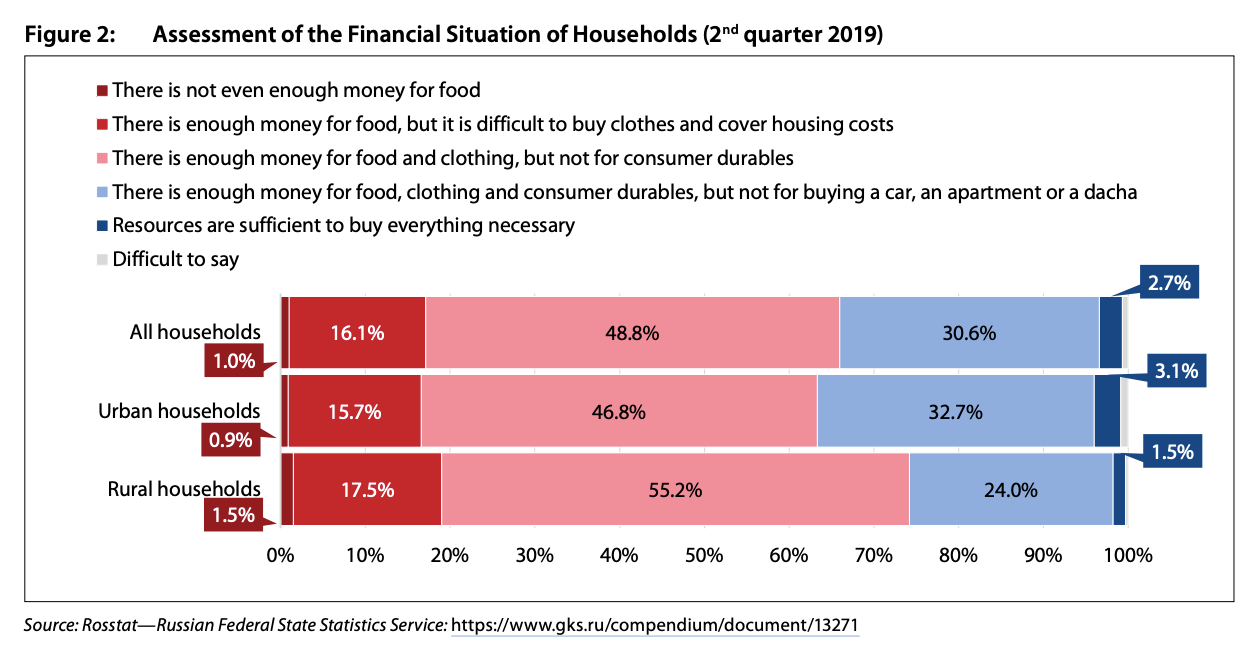 This graphic illustrates the financial situation of rural and urban Russian households during the 2nd quarter of 2019. According to surveys on living standards and deprivation, the extent of perceived poverty is worse than the official poverty line suggests.

For more on the extent of poverty in Russia and the government’s policies to combat it, see Russian Analytical Digest 249 on ‘Need-Based Social Policies’.

END_OF_DOCUMENT_TOKEN_TO_BE_REPLACED

This article was originally published by the Institute for Security Studies (ISS) on 5 January 2017.

Africa will miss most of the internationally-agreed Sustainable Development Goals (SDGs) by the target date of 2030. But it might just reach ‘escape velocity’ enabling it to break out of its extreme poverty orbit by 2045 or 2050.

This is the sense of experts who participated in a seminar on Africa’s future at the Institute for Security Studies (ISS) in Pretoria recently.

‘Almost no Sustainable Development Goals will be met without truly revolutionary improvements in governance and the way services are delivered,’ said ISS chairperson Jakkie Cilliers, who also heads the institute’s African Futures and Innovation programme.  Even in an optimistic ‘Africa Rising’ scenario projected by the ISS, most African countries would not meet the 17 SDGs.

The principle SDG is to eliminate poverty. But extreme poverty (quantified as living on US$1.90 per person, per day or less) was unlikely to be eliminated by the 2030 SDG target date in any plausible scenario, Cilliers said.

END_OF_DOCUMENT_TOKEN_TO_BE_REPLACED

This article was originally published as “On the Origin of a Hunger-Free Species By Means of Enforceable Natural Law” by the Harvard International Review (HIR) on 11 August 2016.

Had Charles Darwin been blessed with precognition while conjecturing about finch beak differentiation over millions of years, he would have envied us. We in the early twenty-first century — within a single lifetime — can observe homo sapiens evolving a transformative new trait with unprecedented strength through the international justice system.

Contrary to common perceptions of his work “On the Origin of Species by Means of Natural Selection,” Darwin’s view of evolution was not confined to physiology alone. In his later book, “The Descent of Man,” he entertained a broader view that included the ways in which more fortunate humans treat the less fortunate, contending, “The aid we feel impelled to give to the helpless is mainly an incidental result of the instinct of sympathy, which was originally acquired as part of the social instincts…”

It’s a safe bet, therefore, that Darwin would have taken great interest in the emergence of the International Food Security Treaty (IFST), an initiative of international law that could equip humanity to eradicate hunger, the world’s most widespread and severe form of suffering.

END_OF_DOCUMENT_TOKEN_TO_BE_REPLACED

This article was originally published by openDemocracy on 22 May 2014.

The collapse of Zine el Abidine Ben Ali’s regime in Tunisia in January 2011, soon followed by Hosni Mubarak’s in Egypt, had a profound impact across the Arab world. There was an eruption of protest in Oman, Libya and Bahrain, while an incident in the town of Deraa in southern Syria sparked demonstrations that grew and spread into regular events involving thousands of young people.

Almost from the start, Bashar al-Assad’s regime was determined to maintain power, with severe repression of demonstrations leading to violence, injury and death. As non-violent demonstrations escalated into rebellion, the regime’s response was to use greater force while insisting that the stability of the state itself was being threatened by terrorists.

For almost a year this mantra was pushed insistently. By late 2012 it had become something of a self-fulfilling prophecy: dedicated young jihadists had formed some of the most cohesive elements of the rebellion, attracting recruits from across the middle east and beyond.