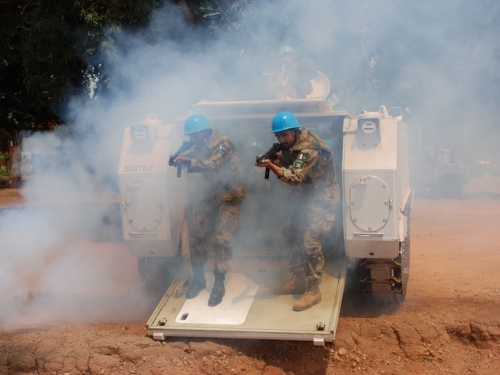 This book review was originally published by IPI Global Observatory on 6 October 2014.

When it comes to responding to conflict, the phrase “they didn’t act fast enough” is one of the most common criticisms of international organizations. From the Rwandan genocide in the 1990s to the recent conflicts in South Sudan and the Central African Republic, swift and timely intervention by peacekeepers and other international actors can mean the difference between life and death. END_OF_DOCUMENT_TOKEN_TO_BE_REPLACED

Think Again Before Exploiting the Arctic’s Resources – Where’s the Infrastructure? Climate change is not an ideology, as some would have us believe – it is an existential fact.  Greenland’s ice cap is melting up to four times faster than it was two decades ago, and if current predictions hold true, by mid-century the Arctic’s seas will be navigable in the summertime. This probability may frighten climate change specialists, but it is good news to those who want to access the High North’s once inaccessible resources (oil, minerals and gas), or to rely upon its shorter and therefore cheaper shipping routes. Indeed, the burgeoning interest of governments and investors in the Arctic guarantees that for better (economic development) and worse (oil spills, shipping accidents, and cultural dislocation), the human footprint will grow exponentially in the region. For those who are ready to kick-start this 21st century ‘gold rush,’ however, here’s an inconvenient question – where’s the infrastructure that is going to support it?

First, let’s begin by stating the obvious – compared to the rest of the world, the broader Arctic region still has almost no infrastructure and what little exists is expensive. Canada’s per-capita transport and communications costs, for example, are 36% higher in the Northwest Territories and 160% higher in Nunavut than in the country as a whole. These costs, driven as they are by the still-extreme climate and extended transport routes, will continue to turn near- and mid-term expectations of large-scale wealth and development into fool’s gold. END_OF_DOCUMENT_TOKEN_TO_BE_REPLACED Visualisation in OpenStreetMap after the earthquake in Haiti. Photo: ItoWorld/flickr.

Accurate and timely maps are a vital resource in contemporary disaster and crisis management. Maps are essential for identifying vulnerabilities, monitoring the effects of disasters and organizing countermeasures. Traditionally, the mapping of crises was the exclusive domain of experts, including cartographers and crisis management professionals. But with the growing democratization of information and communications technology, this monopoly is disappearing.

Recent disasters have witnessed a new generation of online maps, created by civil society actors and relying on volunteers to collect, organize, verify, visualize and share geo-refer­enced information. Prominent examples include the crowdsourced maps created in the aftermath of the Haitian earthquake in 2010 and during Hurricane Sandy in 2012. Although these mapping projects differed in many respects, they had a common aim – to aggregate geo-referenced information from a large number of sources in order to make that information useful for emergency man­agers as well as those affected by the crisis. END_OF_DOCUMENT_TOKEN_TO_BE_REPLACED