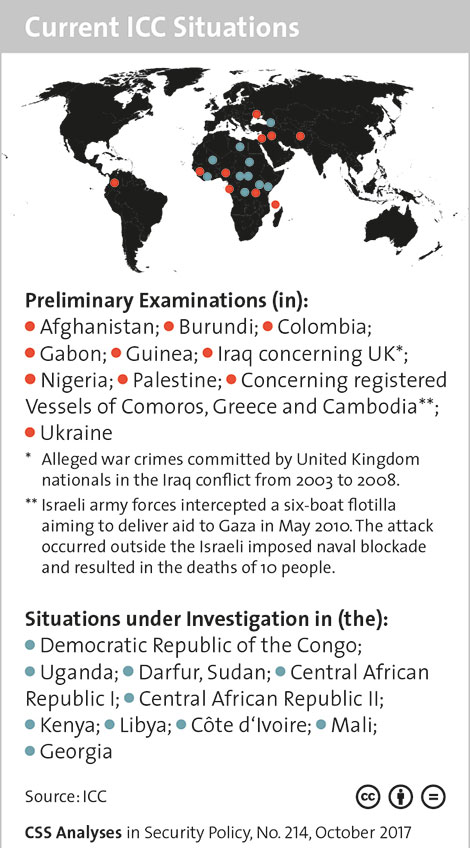 MADRID – The relationship between peace and justice has long been the subject of polarizing debates. Some argue that the pursuit of justice impedes conflict-resolution efforts, while others – including International Criminal Court (ICC) Chief Prosecutor Fatou Bensouda – contend that justice is a prerequisite for peace. As President Juan Manuel Santos leads Colombia through the most promising peace talks in five decades of brutal conflict with the Revolutionary Armed Forces of Colombia (FARC), he will have to consider this question carefully.

The Nuremberg trials, which followed Nazi Germany’s unconditional surrender in World War II, provide an ideal model for post-conflict justice. But, in conflicts in which no side has been defeated, the peacemaker’s job becomes more challenging. Given what is at stake, a trade-off between reconciliation and accountability may well be inescapable.

Since 1945, more than 500 cases of amnesty in post-conflict transitions have been recorded; since the 1970’s, at least 14 states – including Spain, Mozambique, and Brazil – have given amnesty to regimes guilty of serious human-rights violations. In South Africa, amnesty was a key feature of the “truth and reconciliation” process that facilitated the peaceful transition from more than four decades of white-minority rule to democracy.

Similarly, in 2003, Nigeria’s president offered asylum to his Liberian counterpart, Charles Taylor, on the condition that Taylor retire from politics, thereby helping to end the rebellion against him. (In this case, justice was later served; in 2012, the Special Court for Sierra Leone convicted Taylor of 11 counts of aiding and abetting war crimes in Sierra Leone, making him the first former head of state to be convicted for such crimes by an international tribunal since Nuremberg.)

Although it may be painful to offer a safe exit to war criminals and human-rights abusers, the prospect of ending the suffering of civilians can take priority over a principled stand for justice. Who today would oppose amnesty for Syrian President Bashar al-Assad if it ended the brutal civil war that has led to more than 100,000 deaths and created nearly two million refugees (including more than a million children) in just two years?

END_OF_DOCUMENT_TOKEN_TO_BE_REPLACED

The prosecutor of the International Criminal Court, ICC, has asked judges to issue new charges against two alleged warlords in the eastern Democratic Republic of Congo. While experts welcome the idea that rebel militia commanders should be held to account, they are still debating how much of a contribution justice mechanisms can make to protracted peace efforts in the region.

On May 14, the ICC prosecutor, Luis Moreno Ocampo, requested additional charges against Bosco Ntaganda relating to war crimes and crimes against humanity, including acts of murder, persecution and sexual slavery carried out between September 2002 and September 2003 in the Ituri region of eastern DRC.

Ntaganda, the military commander of the National Congress for Defence of the People or CNDP, was first charged by the ICC in 2006 for using child soldiers under the age of 15 to fight, but he has remained at large since the charges were made public in April 2008.