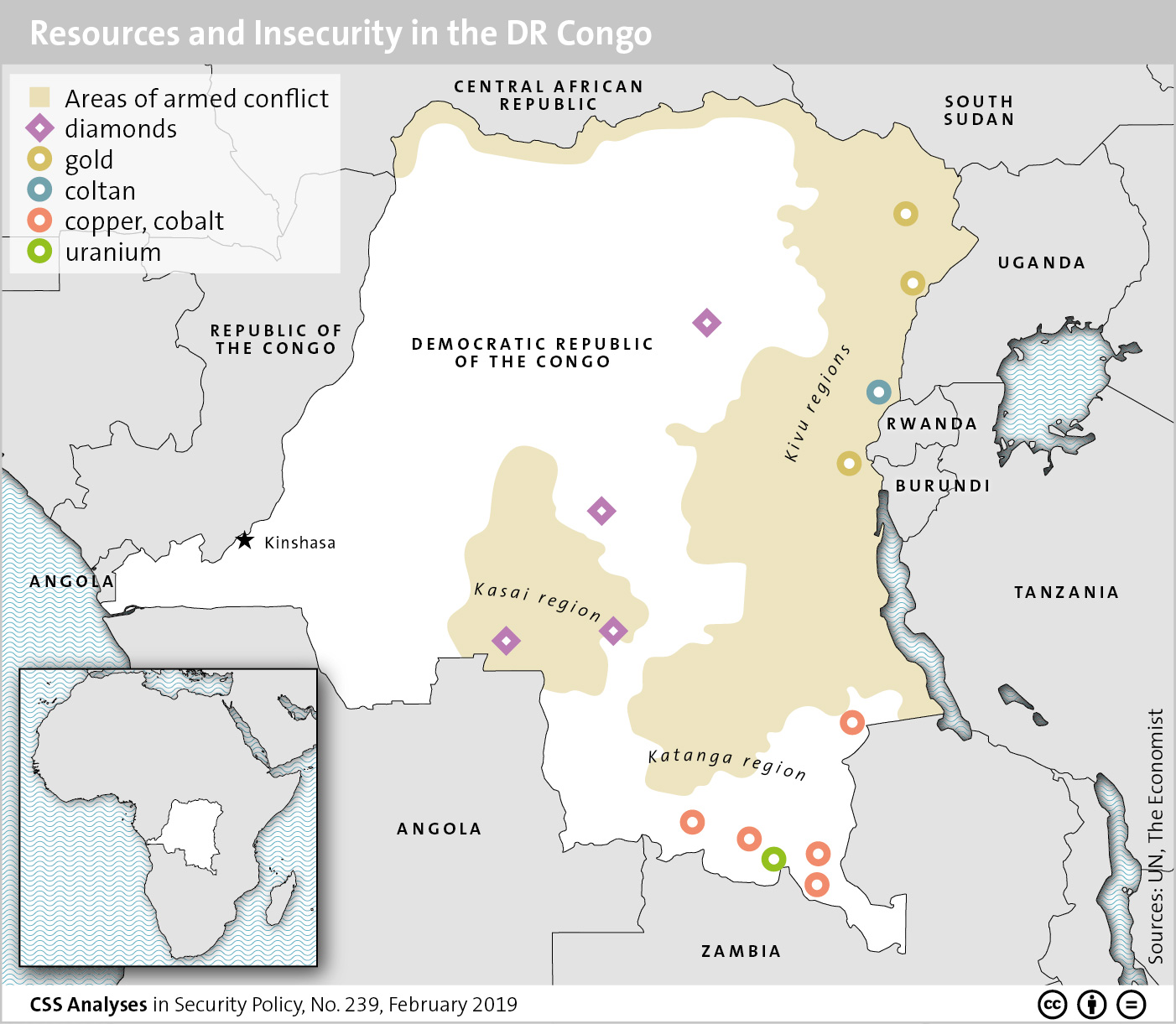 This graphic maps areas of conflict in the Democratic Republic of the Congo (DRC) and how they overlap with key natural resources found in the country. For an analysis of the political system in the DRC and its ramifications for security governance and economics, see Larissa Jäger and Benno Zogg’s lastest addition to the CSS’ Analyses in Security Policy series here. For more CSS charts and graphics, click here.

The Democratic Republic of the Congo (DRC) has been the theater of local and international peacebuilding for almost two decades. Yet, peace has not taken hold. My recently published book “Partners for peace” explores the reasons for why this is the case. Based on rich empirical data, the book locates the answer in the interaction between local and international peacebuilding actors.

END_OF_DOCUMENT_TOKEN_TO_BE_REPLACED

This article was originally published by the Institute for Security Studies (ISS) on 22 June 2017.

This potentially effective unit is being hamstrung by politics and concerns about using force in peace operations.

The Force Intervention Brigade (FIB), the sharp end of MONUSCO – the UN peacekeeping mission in the Democratic Republic of the Congo (DRC) – earned its stripes in 2013 when it helped the DRC’s army defeat the powerful Rwanda-backed M23 rebels in the east of the country.

But not a lot has been heard about the FIB since, though it has remained deployed in the eastern part of the country for four years. What has it been doing?

The unit of some 3 000 troops from South Africa, Tanzania and Malawi has a more muscular mission than the rest of MONUSCO to use necessary force to ‘neutralise’ all the ‘negative’ armed rebel groups in eastern DRC. Its second target was supposed to be the Democratic Forces for the Liberation of Rwanda (FDLR), the armed group founded in the mid-1990s by Rwandan Hutus who fled the country after the genocide against the Tutsis.

END_OF_DOCUMENT_TOKEN_TO_BE_REPLACED

This article was originally published by the Danish Institute for International Studies (DIIS) on 4 January 2017.

Deploying more female soldiers in peacekeeping missions will not in itself prevent sexual exploitation and abuse. Strengthening gender training and investigative capacities are small, yet feasible steps forward.

According to United Nations Security Council Resolution 1325 on Women, Peace and Security (UNSCR 1325), increasing the number of female peacekeepers will reduce sexual exploitation and abuse (SEA) in peace operations. However, this does not seem to be the case in the Democratic Republic of Congo (DRC), where UN peacekeepers from South Africa have been more involved in SEA than peacekeepers from other nations, even though the South African National Defence Force (SANDF) has the highest number of female peacekeepers deployed in the DRC. In the United Nations Organization Stabilization Mission in the Democratic Republic of the Congo (MONUSCO), 243 of the 1351 SANDF troops deployed (18%) are women. However, changing a military culture that tacitly accepts SEA as a part of everyday life in the camps requires more profound measures than simply deploying more women.

END_OF_DOCUMENT_TOKEN_TO_BE_REPLACED

This article was originally published by the German Institute for International and Security Affairs (SWP) in April 2016.

The number of uniformed personnel serving in UN peace missions reached a new record in 2016, at almost 123,000. Following grave failings of UN missions in the Democratic Republic of the Congo and South Sudan, there is growing awareness within the UN of a widening disjoint between the expectations placed upon peacekeeping forces and what they can actually achieve. One aspect of the debate relates to the question of how robustly UN missions should operate in enforcing their mandate. In some quarters the resolute use of force is seen as the key to greater success. Almost three years ago the UN sent a Force Intervention Brigade to Congo with an explicit mandate to neutralise armed groups. An assessment of its record reveals that the brigade cannot be regarded as an organisational model worth replicating, and that peace-enforcing mandates do not necessarily lead to greater success in peacekeeping.

Three years ago, on 28 March 2013, the UN Security Council decided to send a 3,096-member Force Intervention Brigade (FIB) to eastern DR Congo (Resolution 2098). The move came in response to persistent difficulties in establishing peace in the region after the March 23 Movement (M23) was able to capture North Kivu’s provincial capital Goma in November 2012, unhindered by UN forces.