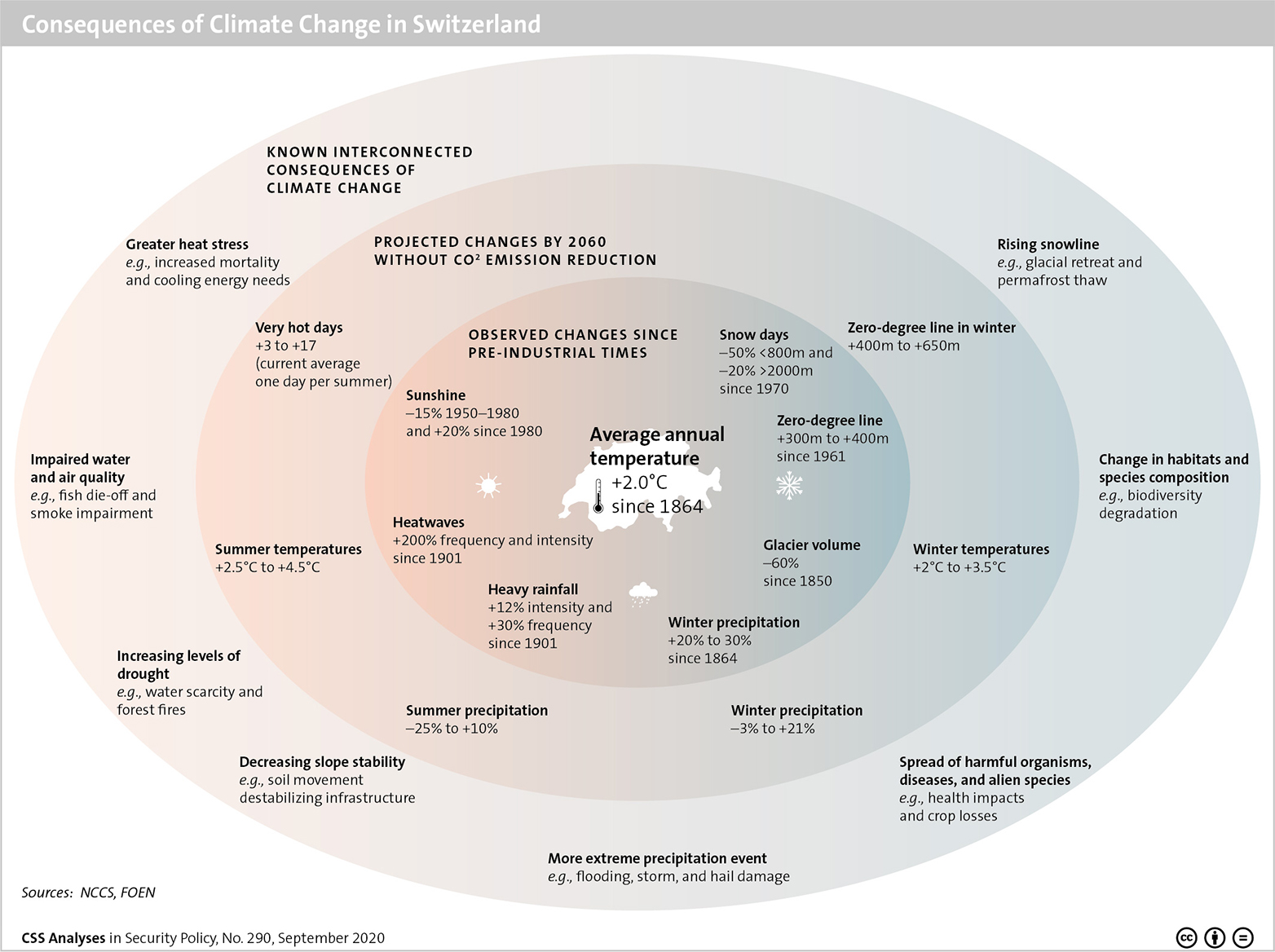 This week’s featured graphic illustrates the consequences of climate change in Switzerland. For more on Climate Change in the Swiss Alps, read Christine Eriksen and Andrin Hauri’s CSS Analysis in Security Policy here.

We are happy to announce that the Climate Change and African Political Stability (CCAPS) Program based at the Strauss Center for International Security and Law has joined the International Relations and Security Network. CCAPS is a collaborative research program among the College of William and Mary, Trinity College Dublin, the University of North Texas and the Strauss Center at the University of Texas at Austin.

CCAPS examines the impact of climate change on political stability in Africa and develops strategies for how to prevent related conflicts. In the words of CCAPS, the program aims at answering three main questions:

END_OF_DOCUMENT_TOKEN_TO_BE_REPLACED

Suriname is not a country which often features in international news. Located on South America’s northern coast between Guyana and French Guiana, many people often forget this former Dutch colony even exists. Being out of the media spotlight has allowed what some might consider unusual developments to occur.

Whilst most states which have experienced military coups and dictatorships celebrate the removal of authoritarian rulers, Suriname went in the opposite direction. After having conceded defeat to Ronald Venetiaan in the 1991 elections after ten years in power, former military ruler Dési Bouterse left the armed forces and instead founded the National Democratic Party (NDP). In July 2010, just under twenty years after being ousted from government, Bouterse was duly elected President of Suriname.

Having gained a taste for power during his decade-long rule in the 1980s, he apparently embraced political life and, rather than instigate another coup, he put himself to the vote. His political campaign targeted the youth demographic, using Bob Marley tracks at his rallies. This age group is especially important for Bouterse as they were not alive when the “December 1982” killings took place, for which he has been on trial since 2007. That a former dictator wanted for murder is now President may lead some to question whether there was underhand political chicanery involved.

END_OF_DOCUMENT_TOKEN_TO_BE_REPLACED

In May, Jonas Rey reported about a plan by the government of Ecuador to forgo the extraction of oil in its Yasuni region in exchange for money. The goal is to prevent the emission of 407 million metric tons of CO2 and at the same time protect a piece of tropical rainforest, which is considered to be the most biologically diverse place on earth.

The plan developed by the economist Alberto Acosta was first met with skepticism by Ecuador’s President Rafael Correa, who thought it inappropriate for his former energy minister to come up with such an idea. Finally endorsed by the president, it began to materialize when on the 4 August Ecuador agreed with the UN Development Programme (UNDP) to establish a trust fund, which would manage financial contributions by donors.

The UNDP has experience in managing such funds through its Multi Donor Trust Fund Office, which already administers more than 30 funds covering 74 countries. The balance sheet of the Ecuador Yasuni ITT Trust Fund is still at zero, but according to Swiss Radio DRS, Germany, France and Spain are considering payment to the fund, of which Ecuador will only receive the interest. The capital is kept as security, in case Ecuador changes its mind and drills oil in the region after all.

What looks like an innovative and promising scheme to link climate policy, environmental protection and sustainable development, also has its disadvantages. The initiative is intended, according to its proponents, to protect two tribes of the Huaorani indigenous people, which renounce any contact with modern civilization. According to a local expert, who talked to Swiss Radio DRS, however, the tribes do not live in the area protected by the scheme but in an area designated by the Ecuadorian government for crude oil extraction. The protected area supposedly consists of swamps not inhabitable by people.

For potential donors far away it’s difficult to judge what the effects of this initiative will ultimately be. However, as the broadcast points out, the protection of the environment should not come at the expense of human beings and vice versa. People and their environment need to be considered together. I encourage countries, companies and individuals to contribute money to the fund. Yet, it’s not too late to change the plan to better respect the indigenous people.

Find an evaluation of the Ecuadorian proposal in our Digital Library.

This week the ISN looks at the causes and consequences of a global nuclear renaissance. We ask whether nuclear power is a false prophet for a planet imperiled by climate change and assess the difficulty of reigning in those that seek to turn energy into weapons.