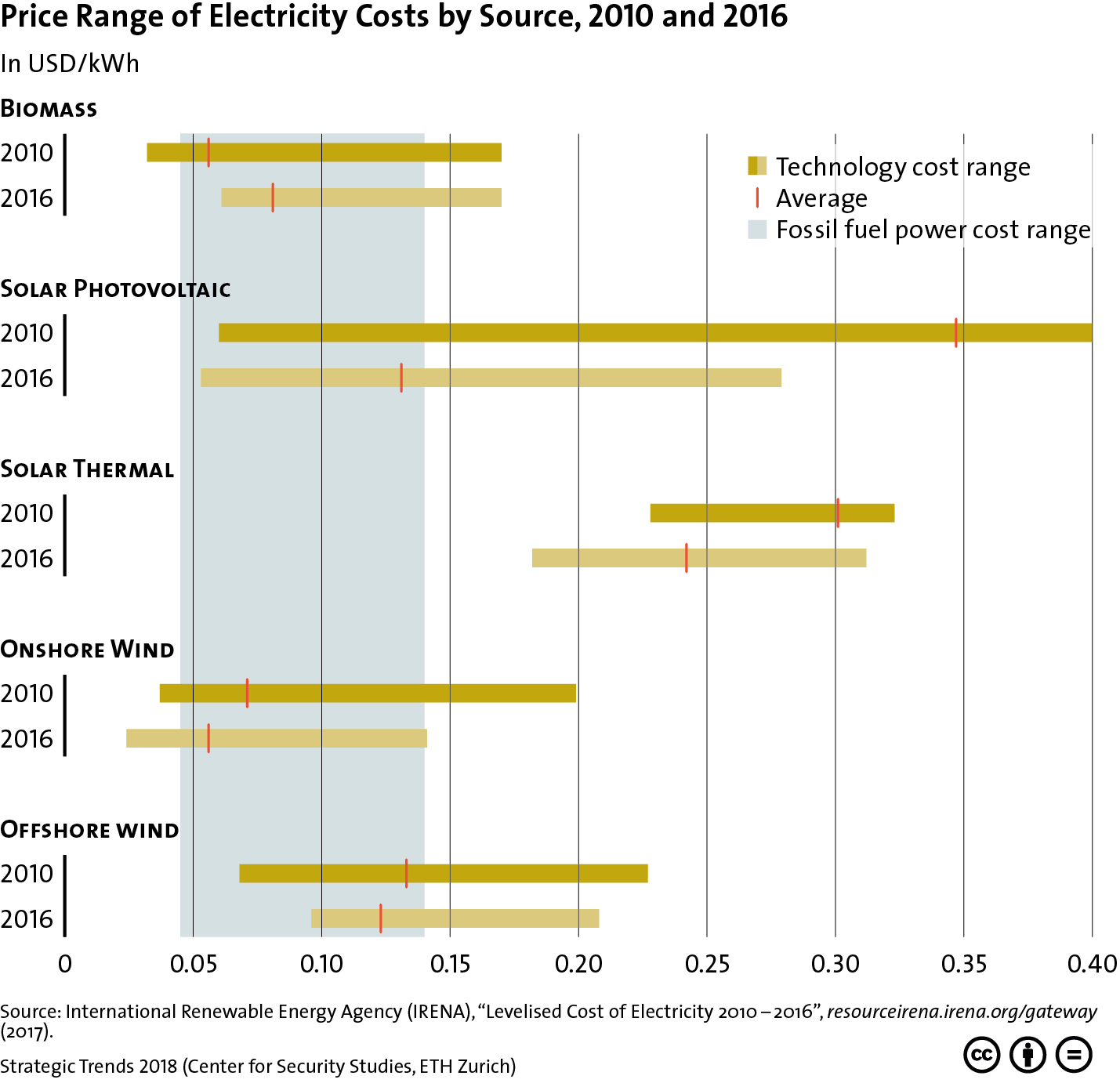 This graphic contrasts the price range of electricity costs stemming from renewable sources with that of fossil fuels for the years 2010 and 2016. For more on the interplay between technological innovation and the geopolitics of energy, see Severin Fischer’s chapter for Strategic Trends 2018 here. For more CSS charts, maps and graphics on economics, click here.

The shifting landscape is forcing countries such as Japan, South Korea, and China to rethink regional cooperation on energy issues such as strategic oil stocks, and technological and institutional coordination, said Mikkal E. Herberg, senior lecturer at the University of California, San Diego, and research director of the Energy Security Program at the National Bureau of Asian Research, at a Capitol Hill event on February 24.

END_OF_DOCUMENT_TOKEN_TO_BE_REPLACED

China is financing the construction of Kyrgyzstan’s first major oil refinery, and excitement is building in Bishkek that the facility could enable the Central Asian nation to break Russia’s fuel-supply monopoly. At the same time, some observers express concern that the project may stoke local resentment, or become enmeshed in political infighting.

The refinery in Kara-Balta, about two hours west of Bishkek, is expected to produce 600,000 tons of fuel annually, enough to end Kyrgyzstan’s dependency on Russian imports, currently pegged at 1,150,000 tons a year, according to the State Statistics Committee. Slated to receive crude piped from Chinese-run fields in Kazakhstan, the project, operated by a smallish Chinese state-run entity called Junda, has already witnessed regular environmental protests and labor disputes, which one lawmaker claims are backed by opposition politicians bent on using the facility as a weapon in a political struggle against the government.

END_OF_DOCUMENT_TOKEN_TO_BE_REPLACED

The “Nuclear Power Renaissance” might be coming to an end before it has had the chance to flourish. In light of the current nuclear meltdown in Japan, people are growing increasingly suspicious of nuclear plants. Governments in several countries are thus postponing or reviewing plans to advance nuclear power as the keystone of their electricity supply.

In their search for alternatives, policy makers would be well advised to take a good look at natural gas. Recent developments in the market are likely to render it increasingly attractive for consumers.

Firstly, the geography of gas supply is currently being turned upside down. Technological progress has enabled the exploitation of gas reserves previously thought inaccessible in North America. As a consequence, the US has become the world’s main producer, overtaking natural gas giants Russia and Iran.

Europe, India and China, too, are thought to be sitting on vast gas reserves, which may now be exploited thanks to new drilling techniques. At the moment, it remains uncertain how soon, and to what extent, these gas reserves will become economically viable. Nevertheless, global supply of natural gas is expected to rise markedly in the long run. Increased supply coupled with current sluggish demand (due to the global recession) should keep prices low. Moreover, consumers will be able to boost energy security by diversifying their natural gas supply.