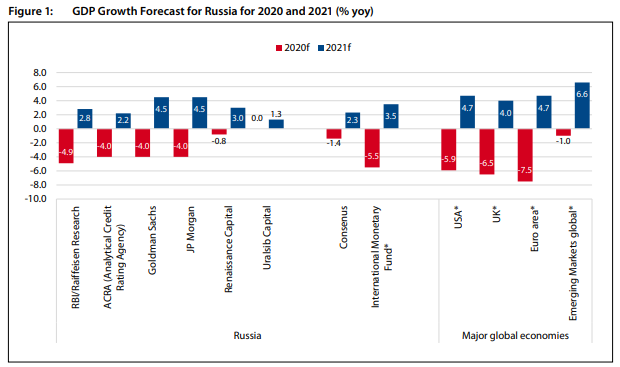 This graphic breaks down the GDP growth forecast for Russia in 2020 and 2021. Forecasts range from slightly negative values to -6 percent. The drastic economic consequences of the quarantine measures explain why 2020 GDP estimates for Russia are currently extremely divergent.

For more on how Russia is facing the economic crisis posed by the Covid-19 pandemic, see Russian Analytical Digest 251 on ‘Russia and the Covid-19 Pandemic’.

This article was originally published by the Institute for Security Studies on 22 July 2016.

A perfect storm is brewing in Mozambique as rocky economic and political fortunes stoke the embers of a decades-old conflict.

Twenty-four years after the end of the country’s civil war, sporadic violence has been erupting as former civil war adversaries have taken up arms once again. This has been fuelled by a complex web of political and economic incentives.

Both the Mozambique Liberation Front-led (FRELIMO) government and the former rebel group turned main opposition party, the Mozambican National Resistance (RENAMO), have demands for the country’s political future. The strength of their agenda at the negotiating table cannot be separated from their strength of arms in the provinces.

Meanwhile, as the political elite hash out positions for their share of power, an economic crisis looms. This has been brought on by government debt mismanagement and corruption.

END_OF_DOCUMENT_TOKEN_TO_BE_REPLACED

After a decade of infatuation, investors have suddenly turned their backs on emerging markets. In the BRIC countries – Brazil, Russia, India and China – growth rates have quickly fallen and current-account balances have deteriorated.[1] The surprise is not that the romance is over but that it could have lasted for so long.

From 2000 to 2008 the world went through one of the greatest commodity and credit booms of all times. Goldman Sachs preached that the BRICs were unstoppable (e.g. Wilson and Purushothaman 2003).

However, Genesis warns that after seven years of plenty, “seven years of famine will come and the famine will ravage the land”. Genesis appears to have described the combined commodity and credit cycle, from which the Brazil, Russia, India and China have benefited more than their due.

END_OF_DOCUMENT_TOKEN_TO_BE_REPLACED

In a recent article, Alexander Reisenbichler and Kimberly J. Morgen argue that ‘Germany won the Euro Crisis’[i]. I doubt that any country can be the winner of a major economic crisis, especially if we are talking about an exporting nation. Of course Germany does benefit from some economic developments of the current Euro Crisis–in particular the low interest rates for German government bonds which reduce public spendings for interets payments on public debt. However, as an exporting nation, Germany depends on stable economic conditions in Europe. Thus a sluggish economic situation in several European economies has a negative impact on German exports and thereby on Germany’s real domestic product (GDP) and labour market. Hence I would argue that Germany benefits from the Euro, not from the Euro Crisis.

END_OF_DOCUMENT_TOKEN_TO_BE_REPLACED

WASHINGTON, DC – One thing that experts know, and that non-experts do not, is that they know less than non-experts think they do. This much was evident at the just-completed Spring Meetings of the International Monetary Fund and the World Bank Group – three intense days of talks that brought together finance ministers, central bankers, and other policymakers.

Our economic expertise is limited in fundamental ways. Consider monetary and fiscal policies. Despite decades of careful data collection and mathematical and statistical research, on many large questions we have little more than rules of thumb. For example, we know that we should lower interest rates and inject liquidity to fight stagnation, and that we should raise policy rates and banks’ cash-reserve ratios to stifle inflation. Sometimes we rely on our judgment in combining interest-rate action with open-market operations. But the fact remains that our understanding of these policies’ mechanics is rudimentary.