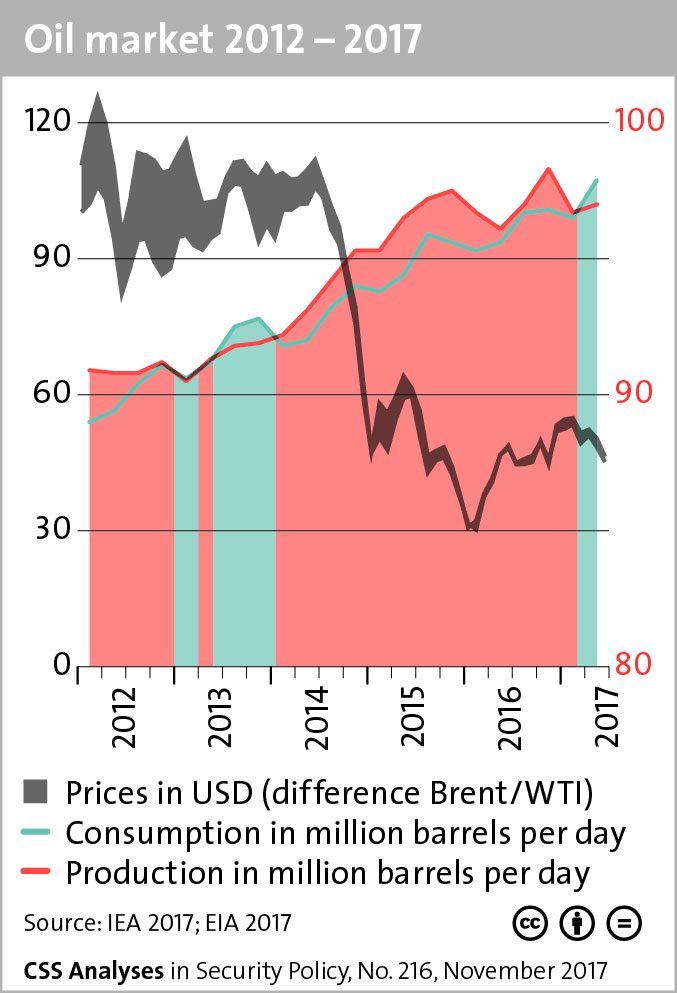 This graphic maps key indicators of the oil market in between 2012 – 2017. For more information on which trends will shape the oil market, check out this CSS analysis by Severin Fischer. For more graphics on natural resources, check out the CSS’ collection of graphs and charts on the subject here.

END_OF_DOCUMENT_TOKEN_TO_BE_REPLACED

On 26 March 2015, the ISN hosted an Evening Talk on “The Politics of Oil in Today’s Middle East.” The featured speaker was Dr. Gawdat Bahgat, who is currently a Professor of National Security Affairs at the US National Defense University’s Near East South Asia (NESA) Center for Strategic Studies. The following video excerpts highlight the observations Dr. Bahgat made in his prepared remarks and in a follow-on question and answer (Q&A) session which was moderated by the ISN’s Peter Faber.

END_OF_DOCUMENT_TOKEN_TO_BE_REPLACED

This article was originally published by Southern Pulse on 22 January 2015.

On 14 January 2014, Venezuelan President Nicolas Maduro promised the Petrocaribe alliance would continue and its twenty member countries would further consolidate into a “great economic zone.” President Maduro’s guarantee comes at a precarious time for his country, as a rapid and unexpected slump in global oil prices, coupled with persistent economic stagnation in Venezuela, have undercut his administration’s ability to maintain its social programs and address the country’s financial imbalances.

END_OF_DOCUMENT_TOKEN_TO_BE_REPLACED

One in five African states produce hydrocarbons, and most of these are heavily dependent on oil and gas revenues to finance their governments and generate foreign exchange. Further, an emerging group of East African states are waiting on international oil companies to develop new oil and gas reserves. But Africa’s record using non-renewable oil and gas resources to trigger economic and social development is poor – and plummeting prices may portend more instability to come.