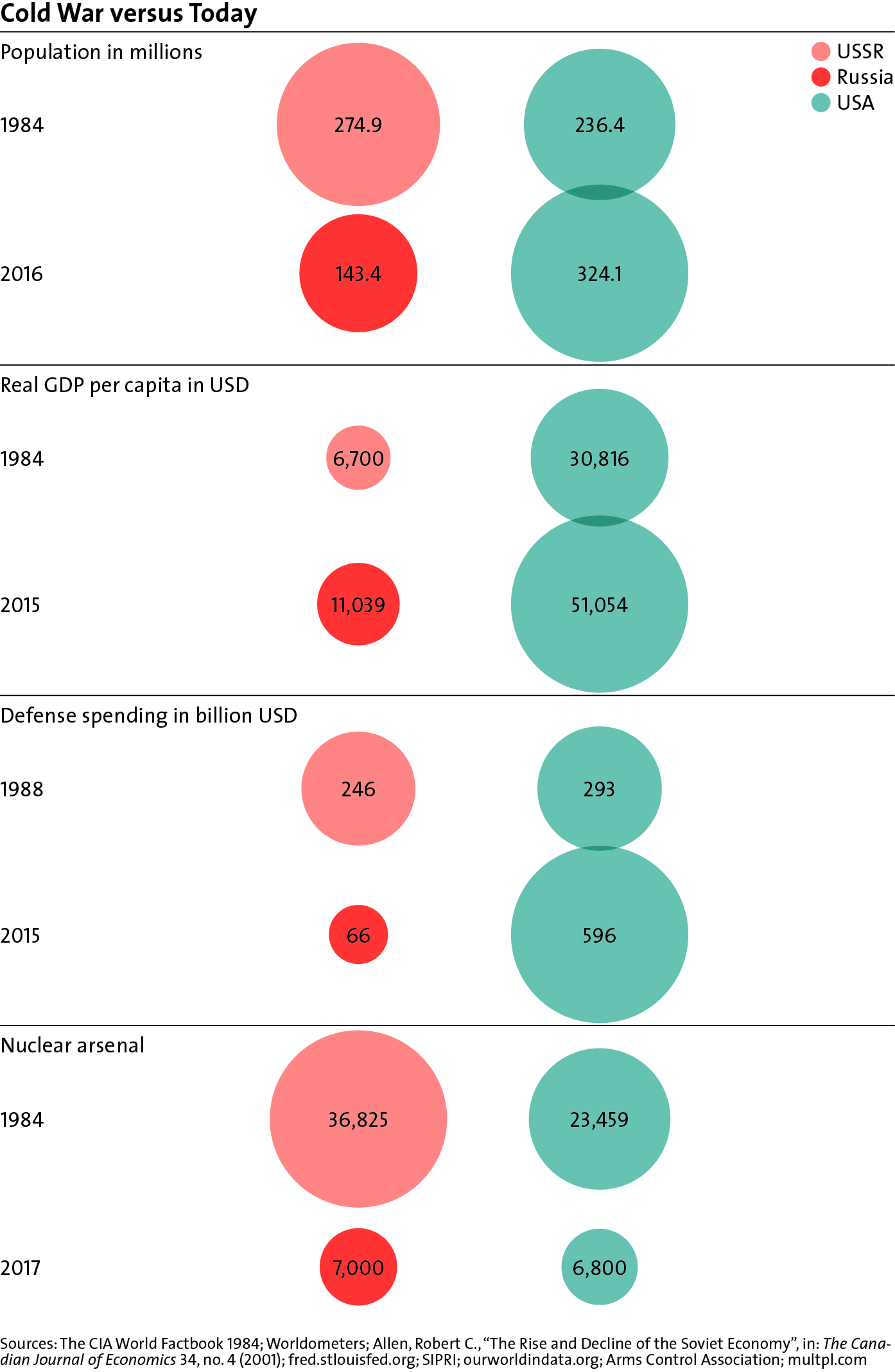 This graphic shows how the USSR compared to the US in terms of population, real GDP per capita (USD), defense spending (in billion USD) and nuclear weapons in the 1980s, as well as how the US compares to Russia in these key areas today. For an analysis of how different interpretations of the recent past still affect West-Russia relations and what is needed to rebuild trust, see Christian Nünlist’s chapter in Strategic Trends 2017 here. For more CSS charts and graphics, click here.

This article was originally published by the Federation of American Scientists (FAS) on 28 April, 2015.

In a speech to the Review Conference of the Non-Proliferation Treaty in New York earlier today, U.S. Secretary of State John Kerry disclosed new information about the size of the U.S. nuclear weapons stockpile.

The September 2014 number of 4,717 warheads is 43 warheads off the estimate we made in our latest FAS Nuclear Notebook in March this year.

END_OF_DOCUMENT_TOKEN_TO_BE_REPLACED

On 12th June 1982, an estimated one million people converged in Central Park, Manhattan, to rally in support of nuclear disarmament.  It marked the peak of a wave of public engagement that began over nuclear power, but had morphed into a push against the nuclear arms race that had come to epitomize the Cold War era.  In Europe, a number of similar protests in 1983 drew an estimated total of 3 million people.

END_OF_DOCUMENT_TOKEN_TO_BE_REPLACED

Today, Russia and the US possess approximately 95% of the world’s nuclear weapons, and bilateral nuclear relations between these two countries still constitute one of the main issues in global nuclear disarmament.

In spite of recent Russia-US agreements to reduce their respective nuclear stockpiles, however, Russia still maintains an active and robust nuclear policy, one that is now no longer solely dependent on the issue of balancing against the United States, but which must also take into account a number of nuclear states – both lesser, traditional nuclear threats such as China, France and the United Kingdom as well as newer potential threats such as Pakistan and North Korea. Russia’s nuclear strategy is encapsulated in an unpublished but widely-acknowledged document called “Foundations of State Policy in the Field of Nuclear Deterrence” (Russian: Основы государственной политики в области ядерного сдерживания). The Russian Ministry of Defence acknowledges that all nuclear states have their own particular nuclear strategies, which account for their own respective national security needs as well as nuclear reduction and non-proliferation.

END_OF_DOCUMENT_TOKEN_TO_BE_REPLACED

MOSCOW – In a recent speech in Berlin, US President Barack Obama reaffirmed his commitment to nuclear disarmament and proposed steps toward achieving that goal. But Russia has made clear that it does not plan to pursue further reductions to its nuclear arsenal any time soon.

In the speech – delivered nearly 50 years after President John F. Kennedy addressed the then-divided city, highlighting the value of arms control between adversaries – Obama announced that the United States is prepared to cut its nuclear arsenal by up to one-third. He also proposed major reductions in the number of tactical nuclear weapons (TNWs) deployed in Europe. Moreover, he called upon the international community to renew its efforts to prevent Iran and North Korea from developing nuclear weapons; to bring theComprehensive Nuclear-Test-Ban Treaty and the proposed Fissile Material Cut-Off Treaty into force; and to make nuclear energy safer.