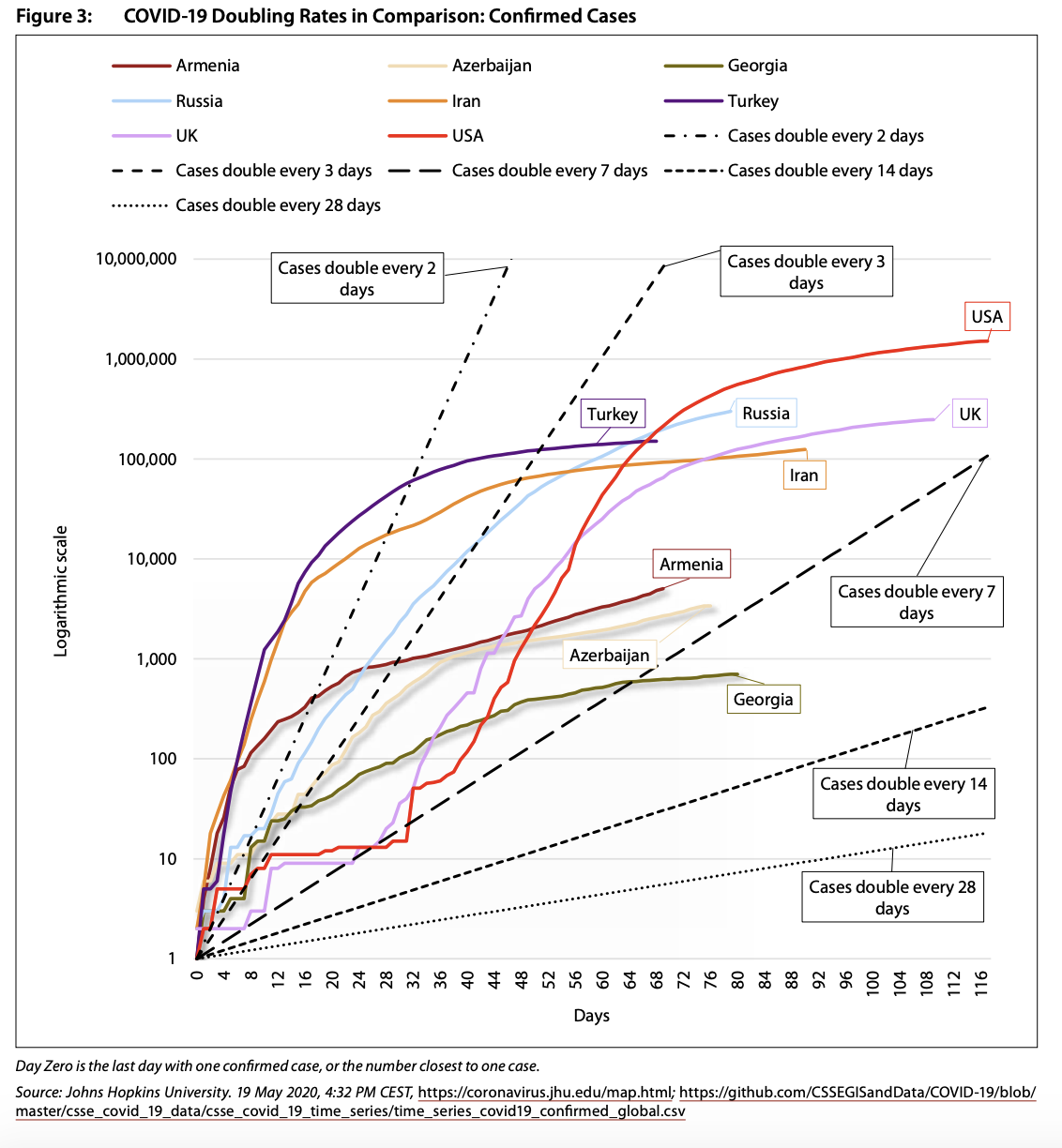 This graphic compares the COVID-19 doubling rates of confirmed cases in different countries around the world. For insights on the structural challenges that the coronavirus pandemic has made visible in Georgia, Armenia and Azerbaijan, read the Caucasus Analytical Digest 115 here.

For more on agriculture and trade with Russia, see the Caucasus Analytical Digest 117 here.

END_OF_DOCUMENT_TOKEN_TO_BE_REPLACED

Policymakers and analysts have spent the past two decades applying the same insights and settlement approaches to the Nagorno-Karabakh conflict with the same limited impact. There is an underpinning perception that everything that could have been said has already been said. This, combined with a set of overused words such as ‘stalemate’, ‘deadlock’, ‘frozen’ and, more recently, ‘simmering conflict’ brings with it a certain level of fatigue and apathy on the part of the conflict parties and external observers.

However, tangible contextual changes within protracted conflicts often open up windows of opportunity for new dynamics in peace processes. In this respect, does Armenia’s stated intention to join the Russian-led Customs Union provide a window of opportunity for renewed mediation in the Nagorno-Karabakh conflict?

END_OF_DOCUMENT_TOKEN_TO_BE_REPLACED

This week, the ISN focuses on the Nagorno-Karabakh conflict. The dispute between Armenia and Azerbaijan over this de facto independent territory has been running since the break-up of the Soviet Union. Mediation efforts by the ‘Minsk Group’, a group of OSCE member states, haven’t brought any substantial success. Some even argue that they’ve been counterproductive.

As other disputes stuck in a ‘no peace, no war’ situation for so long, Nagorno-Karabakh belongs to the ‘frozen conflicts’ species. But the dramatic meltdown of the South Ossetia conflict last summer showed that frozen conflicts should be taken very seriously indeed.

You might also want to check our resources on the whole Caucasus region or on mediation in peace processes in general.