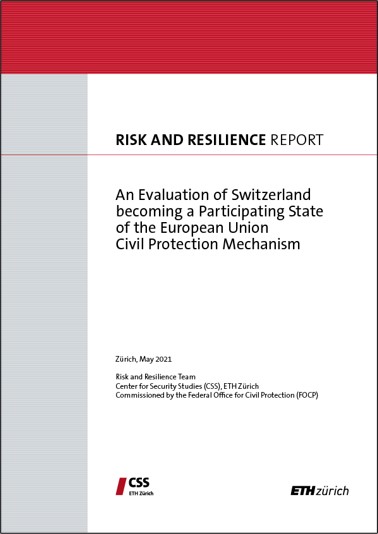 During the repatriation operations in response to the COVID-19 pandemic in spring 2020, Switzerland benefited directly and indirectly from the activation of the European Union Civil Protection Mechanism (UCPM), despite not being a Participating State thereof. The increasing severity of natural and socio-technical hazards and their far-reaching consequences underscore the importance of international collaboration in other crises beyond the current pandemic. A new CSS Risk and Resilience Report, commissioned by the Swiss Federal Office for Civil Protection (FOCP), therefore assesses the costs and benefits of potential Swiss participation in the UCPM.

To slow the spread of the new coronavirus SARS-CoV-2 and the resulting respiratory disease COVID-19, many countries introduced travel restrictions, reduced or stopped air traffic altogether, and closed their land and sea borders to non-citizens in early 2020. As a result, European countries carried out one of the largest repatriation operations in recent history. In doing so, Switzerland and the EU were in close contact to bring their nationals home from all over the world.

Swiss-EU coordination of repatriations in spring 2020

In Switzerland, the Crisis Management Center of the Federal Department of Foreign Affairs was responsible for organizing the repatriation of Swiss nationals who were unable to travel home independently. The EU activated its UCPM for the same purpose. The UCPM is part of the Directorate-General for European Civil Protection and Humanitarian Aid Operations (DG ECHO). It aims to strengthen cross-border collaboration in disaster preparedness, risk assessment, and emergency response. In addition, it offers a last resort for consular support when commercial transport options are limited or non-existent, and when nationals from multiple Member States are in need of assistance or repatriation. Participation in the UCPM is also possible for non-EU countries, who pay an annual fee in return for full access to its services. To date, Iceland, Montenegro, North Macedonia, Norway, Serbia, and Turkey have become Participating States.

Switzerland is not currently a Participating State. Nevertheless, in spring 2020 Switzerland was able to participate on an ad hoc basis in circa 40 consular meetings in Brussels in order to achieve the necessary coordination for flights with other European countries. This allowed Switzerland to benefit from the exchange of information between the represented states on planned flights as well as from logistical and security-related information. Switzerland also indirectly benefited from diplomatic demarches for flight permits in non-European countries, which were planned and discussed at EU level in order to resolve deadlocked situations. As a result, Switzerland was able to fly around 7,000 people stuck abroad back to Europe, circa 4,000 of whom were Swiss residents. A further 1,500 Swiss residents were repatriated on flights coordinated by other European countries. Although both parties benefited from this close coordination, it should not be taken for granted that Switzerland would gain access to the EU’s crisis management services on an ad hoc basis in future crises.

The need for international collaboration in crises

As disasters do not respect political and geographical borders, a pandemic is not the only kind of crisis that requires international collaboration. The severity of natural hazards, such as floods, earthquakes, and forest fires, may overwhelm national response capacities and necessitate emergency support from abroad even if the impact of the hazards does not cross borders. Air currents and waterways will almost always distribute the effects of major socio-technical emergencies, such as chemical or nuclear accidents, across countries and possibly continents, requiring a coordinated response. In addition to mitigating the direct impacts, effective cross-border responses to disasters can also alleviate broader socio-economic ripple-effects on an international scale.

International collaboration can also be key to national preparedness. The unpredictability of disasters can pose a challenge to national preparedness by resulting in emergency management professionals lacking operational experience, and political decision-makers having limited parameters at their disposal for strategic planning purposes. These factors can undermine the readiness of nations for rare but extreme events, whether natural, social, or technological. Benefiting from the experience of other countries and tapping into transnational expertise can therefore be crucial for protecting people, assets, infrastructures, cultural heritage, and natural environments.

It is for these reasons the EU Member States created the UCPM in 2001. It is activated when a disaster overwhelms a country’s response capacity and the country makes a request for assistance through the Emergency Response Coordination Centre (ERCC). The ERCC then coordinates the deployment of expertise and delivery of assistance offered by Member and Participating States with resources committed (since 2013) to the European Civil Protection Pool. At the request of Member and Participating States, the UCPM can also support European responses internationally. In addition to emergency responses during acute disasters, the UCPM aims to increase disaster preparedness and prevention activities internationally by facilitating the exchange of knowledge and best practices, and by strengthening cooperation via training exercises.

Switzerland and the UCPM: the road ahead

In 2017, Switzerland and DG ECHO signed an Administrative Arrangement that signals closer future collaboration in disaster preparedness, crisis management, and humanitarian aid. While this Arrangement provides a framework for dialogue and coordination at a technical level, it does not enable Switzerland to benefit from the core operational, coordination, communication, training, and network services of the UCPM. To benefit from its services, Switzerland must become a Participating State.

Major disasters have fortunately been rare in Switzerland but socio-economic, environmental, climatic, and technological developments are continually changing the context and conditions of the hazard landscape. Climate change, for example, is placing Switzerland’s population, infrastructure, and environmental heritage at much higher risk by increasing the frequency and impact of many natural hazards, such as floods, drought, forest fires, and landslides. A changing climate will also increase the frequency and intensity of extreme weather events and social upheavals internationally, placing Swiss nationals abroad at higher risk. Socio-economic and technological transformations, such as the digitalization of society and the economy, will also increase interdependencies, and create new challenges for the protection of Swiss society and its critical infrastructure in the coming decades.

In 2020, the FOCP commissioned the CSS Risk and Resilience Team to provide an independent assessment of the costs and benefits for Switzerland in becoming a Participating State of the UCPM. The aim of the recently published report is to provide a scientific evidence-base that can inform strategic decision-making on avenues for future collaboration between Switzerland and the UCPM. It does not give a final recommendation on whether or not Switzerland should become a Participating State.

Overall, the report highlights many immediate benefits and long-term opportunities for Switzerland from participating in the UCPM, such as a significant increase of the capacity of cantonal and federal authorities in civil protection to prepare for and respond to current and future hazards, and more opportunities for Swiss personnel to gain operational experience with a smaller price tag. These advantages have to be weighted up against the substantial participation fee and potential risks, such as Participating States’ lack of formal decision-making powers over the UCPM’s future strategic developments and financial envelope. While Swiss participation in the UCPM is ultimately a political decision, this decision will have immediate and long-term implications for Switzerland’s operational capacity to protect lives, livelihoods, and assets.

Read the full report here: An Evaluation of Switzerland becoming a Participating State of the European Union Civil Protection Mechanism