It is commonly believed that any effort to stop violence is good. However, there are different ways and approaches to bring an end to armed fighting. A better understanding of these different approaches and their respective forms and goals is essential if a halt in fighting is to support the transition from war to justice and peace. The ideal-type sequence of security arrangements in a peace process is illustrated in Figure 1, a diagram that Jeremy recently used in our MAS ETH Mediation in Peace Processes course. A stop in fighting that is temporary (=cessation of hostilities) often precedes a stop in fighting that is monitored and where space is created for substantive agreements to be found regarding the conflict parties’ grievances in peace negotiations (=preliminary or interim ceasefire). Only when substantive agreements on political, economic, and judicial questions have been found are conflict parties likely to agree on the tough questions of disarmament, disengagement and reintegration, final status of forces, and termination of the status of war (=definitive ceasefire). Such ceasefires that fit into the logic of a political peace process are distinct from a mere halt in fighting that is delinked from a political process which may lead to long-term separation of communities or countries, yet without resolving their grievances (=stalemate ceasefire). 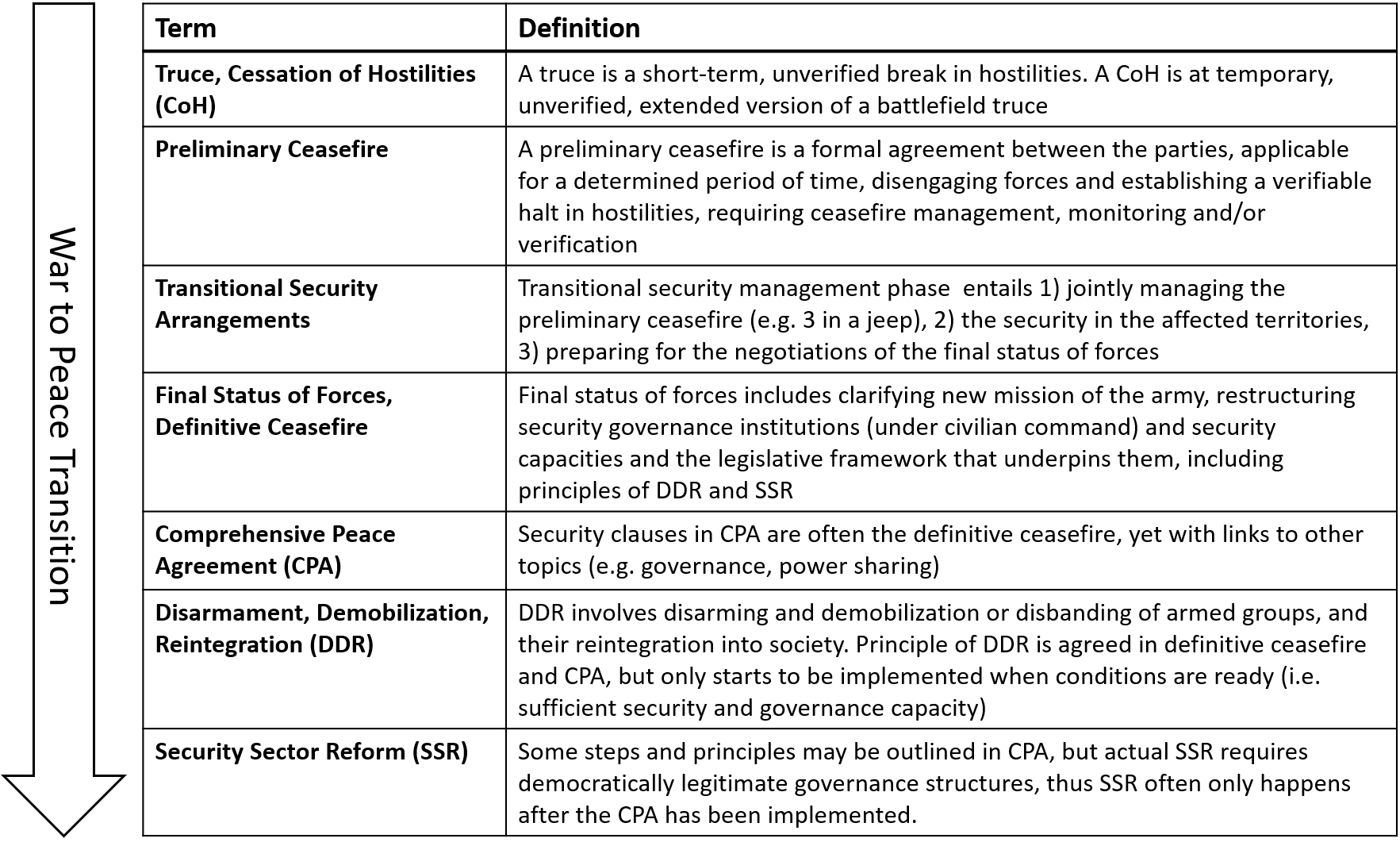 It is easy for critics to argue that reality is messier, and that conceptual clarity and sequential logic are therefore unsuited for dealing with the confused chaos we encounter when we try to grasp a specific case. Indeed, we have cases where there is already a peace agreement, and where we are therefore in a post-agreement phase, but because the conflict actors continue to fight while exploring options to negotiate on substance, we are actually in a pre-negotiation or negotiation phase (e.g., Central African Republic). We also encounter cases where there is a ceasefire, but the political negotiations have stalled, leading to a frozen stalemate and a continued arms race stretching over the decades (e.g., Korean Peninsula).

Jeremy’s booklet encourages us to apply his ideas to any given case in a two-step process: First, gain clarity about what can be done generically. Second, explore how to adapt and contextualize the generic ideas to the given case at hand. In all such reflections, keep in mind the ultimate goal so aptly outlined by Freedom Nyamubaya: “to demystify security … so that it becomes nationally owned, … inclusive and transparent.”

Thanks to the Mediation Support Project (CSS and swisspeace, funded by Swiss FDFA) that made Jeremy Brickhill’s publication possible. You can find more information on ceasefire research at CSS here and on security and mediation here.

Simon J. A. Mason is a senior researcher and head of the Mediation Support Team at the Center for Security Studies (CSS), ETH Zurich.