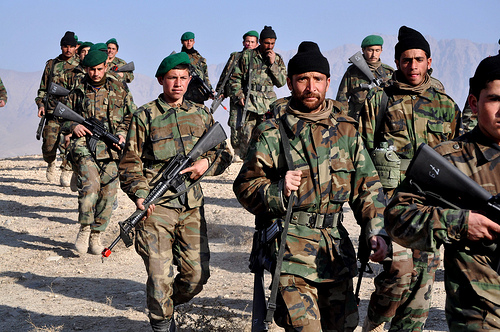 Will they be able to fight the Taliban after the Americans leave? Photo: Sally Armstrong, , RN/MOD via Helmandblog/flickr

October 7th marked the 11th anniversary of the United States-led war in Afghanistan. International combat forces are due to leave the country at the end of 2014, yet the war has remained “mission unaccomplished“. After years of conflict, NATO forces are set to handover responsibility for securing the country to the Afghan armed forces. However, it remains to be seen whether the Afghan’s will be able maintain order and stability after the withdrawal of foreign troops?

In the aftermath of 9/11, the United States and its NATO allies invaded Afghanistan in order to dismantle the Taliban regime and the core leadership of al Qaeda. After several weeks of conflict, NATO troops successfully ousted the Taliban from various cities and helped to establish a new democratic country — the Islamic Republic of Afghanistan. END_OF_DOCUMENT_TOKEN_TO_BE_REPLACED