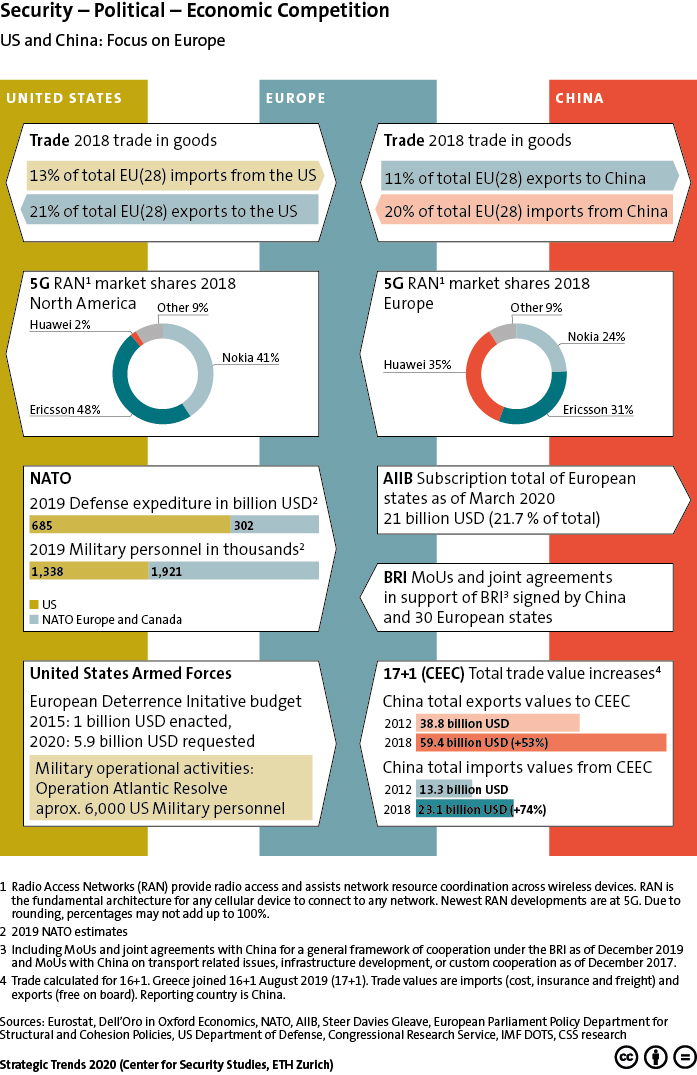 The US-​Chinese rivalry is becoming the prime mover of global affairs. This graphic outlines the competition between these two countries focusing on Europe at the security, political and economic levels.

To put these numbers into context, read Jack Thompson’s Strategic Trends 2020 chapter on China, the US and the world order here. 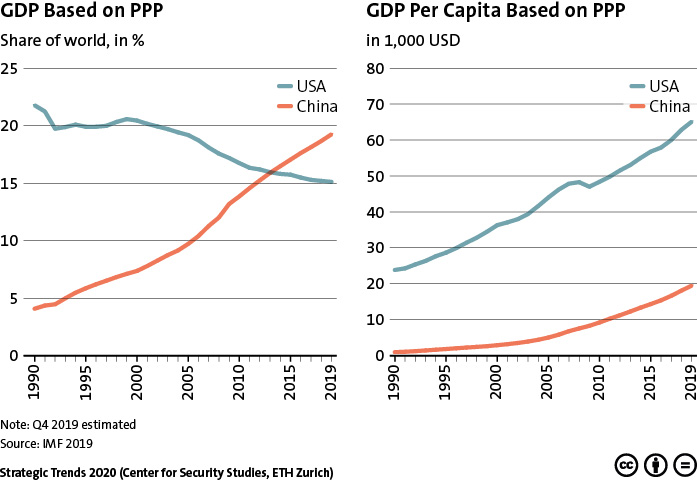 This graphic compares the gross domestic product (GDP) of China to that of the US between 1990 and today. Although China has become the world’s largest economy in terms of GDP based on purchasing power parity (PPP), the United States remains ahead in terms of GDP per capita based on PPP.

For more on China, the US and the world order, read Jack Thompson’s Strategic Trends 2020 chapter here.

This interview was originally published by Strife.

Mary Kaldor is Professor of Global Governance at the London School of Economics and Political Science. She is best known for her seminal work ‘New and Old Wars: Organised Violence in a Global Era’, now in its third edition. Professor Kaldor was interviewed for Strife by Melanie Daugherty.

END_OF_DOCUMENT_TOKEN_TO_BE_REPLACED

Voices critical of Israel’s role in the Middle East sometimes argue that its occupation of the West Bank, much of the Golan Heights and the Gaza Strip is imperialist in nature.  Such criticism draws a parallel with 19th and 20th century European imperialism, casting the Palestinians as the indigenous inhabitants of the region and the Israelis as a hostile ‘foreign’ power.  Another implication of this characterization, however, is that the occupation is economically motivated, or is best understood in economic terms. Today, to complement our discussion of ‘Economics, Politics and War’ last week, we examine some aspects of the political economy of the Palestinian-Israeli conflict. Specifically (and with the help of Miriam Qamar’s recent essay “Thoughts on the Dialectics of Revolution and Palestinian Nationalism”), we do so through a Marxist lens.

END_OF_DOCUMENT_TOKEN_TO_BE_REPLACED

In reaction to the November 2011 kidnapping and killings of EU nationals in Northern Mali, Catherine Ashton, the High-Representative of Foreign Affairs and Security Policy for the EU, stated that: ‘These incidents show the need to continue and intensify the efforts against insecurity in the Sahel. Through its Strategy for Security and Development in the Sahel, the EU is committed to help the Sahel countries in this endeavor.” Nevertheless, the complexity of the terrorist threat in the Sahel region, and its connection to transnational criminal activities, makes me wonder whether the EU counter-terrorism strategy for the Sahel region is fit to confront this challenge.

The terrorist threat in the Sahel region is mainly posed by al-Qaeda in the Islamic Maghreb (AQIM). AQIM has its origins in the Algerian Groupe Salafiste pour la Prédiction et le Combat (GSPC). Largely as a result of the effectiveness of the Algerian army’s counter-terrorism strategy, GSPC was forced to move its headquarters to northern Mali, where it associated itself with al-Qaeda in 2007. The GSPC — rebranded as AQIM — targets the foreign presence in the region, mainly kidnapping European tourists in order to destabilize the Algerian government and convince Western governments to withdraw their troops.