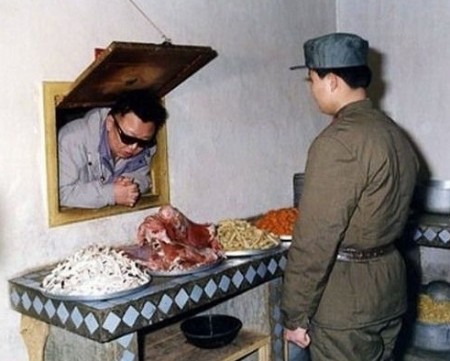 North Korea has been suffering from food shortages due to economic mismanagement and natural disasters intermittently for the past two decades, when China and the former Soviet Union implemented hard currency payment systems that sharply reduced North Korea’s ability to import goods. The years of mismanagement thus resulted in famines during the 1990s which, according to some estimates, killed over a million people. In past years, therefore, South Korea and the US have been the primary external sources of food, either through direct food assistance or deliveries of fertilizer. But this year, with rising impatience and anger toward the North Korean regime, these reinforcements are in doubt. END_OF_DOCUMENT_TOKEN_TO_BE_REPLACED 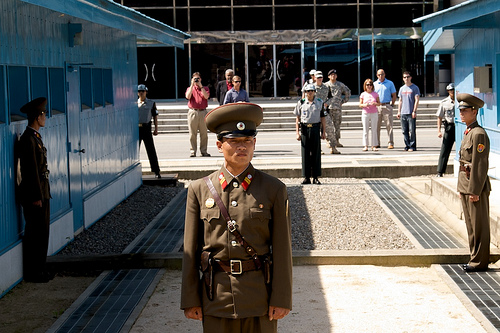 When will this border be crossed again? photo:fresh888/flickr

After Tuesday’s incident, in which North Korea reportedly shot 170 rounds of artillery on the South Korean island of Yeonpyeong killing two civilians and two marines, tensions have been at an all-time high in East Asia. Increasingly unpredictable and volatile in its behavior, the Kim regime seems to have embraced a whole new level of brinkmanship in this long-running conflict. Explanations in terms of reasons for such a brazen attack vary, from the internal power dynamics of the elder Kim shifting power to his newly appointed heir-apparent, to simple blackmail. Although we may never know what caused North Korea to risk so much (also in relation to its increasingly impatient ‘big brother’, China) the worry that the Koreas and their closest allies might be drawn into a war because of a provocation or freak accident is as worrying as ever.

I don’t believe that this conflict will escalate further. North Korea has pushed proverbial buttons before and will undoubtedly continue to do so, whether to consolidate the heir-apparent’s power base in the military or in order to push members of the six party forum to grant it further concessions in a yet unforeseeable round of talks. It is, however, unlikely to be willing to sign its own death certificate in the form of a highly destructive war and one which could involve the threat or actual use of nuclear weapons (shudder). We may not want to place much trust on the rational capabilities of Kim and his entourage, but China, for one, will do all it can to prevent this. END_OF_DOCUMENT_TOKEN_TO_BE_REPLACED 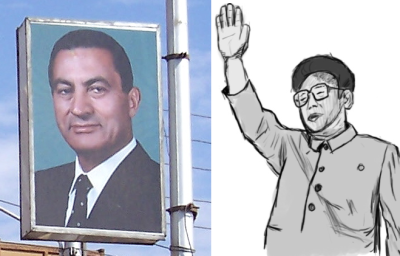 Do you get to bring your offspring to work once a year? Will that inspire them to follow in your footsteps or do they simply enjoy playing with office supplies and promotional freebies?

The world has seen two very inspiring dads in the past week. Hosni Mubarak and Kim Jong-Il have touchingly taken their sons along on their business trips.

Gamal Mubarak got a taste of one of Egypt’s main diplomatic conundrums: Israeli-Palestinian peace negotiations. Let’s hope that he made a good impression in Washington – he seems pretty serious about taking over his dad’s job.

Reports from South Korea signal that Kim Jong-Un has also probably been getting a little field training with his dad. Speculations that Kim Jong-Il introduced him to the Chinese president last Friday have been making the rounds.

Both authoritarian leaders’ health is ailing, but as professional statesmen they are making sure that the succession will be smooth. 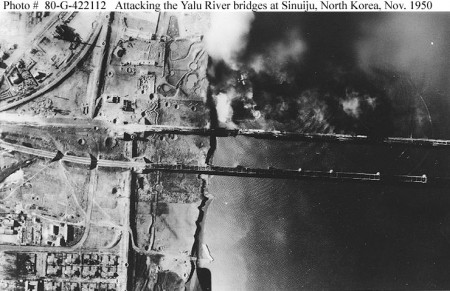 Bombs over North Korea in 1950, courtesy of the US Department of Defense/Public Domain

Last week marked the 60th anniversary of the beginning of the Korean War; a war that gave rise to one of the most intractable conflicts in modern history. Technically still at war, North and South Korea were torn apart in the shadows of the early phase of the Cold War and in some ways represent one of the last remnants of it.

Yet the war itself, as well its veterans, are often overlooked; a mere footnote in the long, epic and tragic saga of the 20th century.

But to understand the current conflict, to see how deep the antipathy and fear go, it is important to look back at the war and to remember that the seeds of Kim Jong-Il’s madness, the source of China’s intransigence and the root of South Korea’s fear were sown in the conflict that a war-weary and exhausted world fought in 1950-53.

Here are some interesting resources on the topic:

How about a taste of the icy waters of a frozen conflict?

The folks at the Lotte Chilsung say that the South Korean Ministry of the Enviroment will use the water as part of its campaign for the zone to become a UNESCO biosphere protection site. According to the Guardian, environmentalists say there are close to “2,900 plant species, 70 mammals and 320 types of bird flourishing in the zone.”

From the company site: “‘DMZ’ is one region in the world that the ecosytem is well preserved as it is and has been out of human reach for 50 years.”

Well that’s a diplomatic way of putting it.