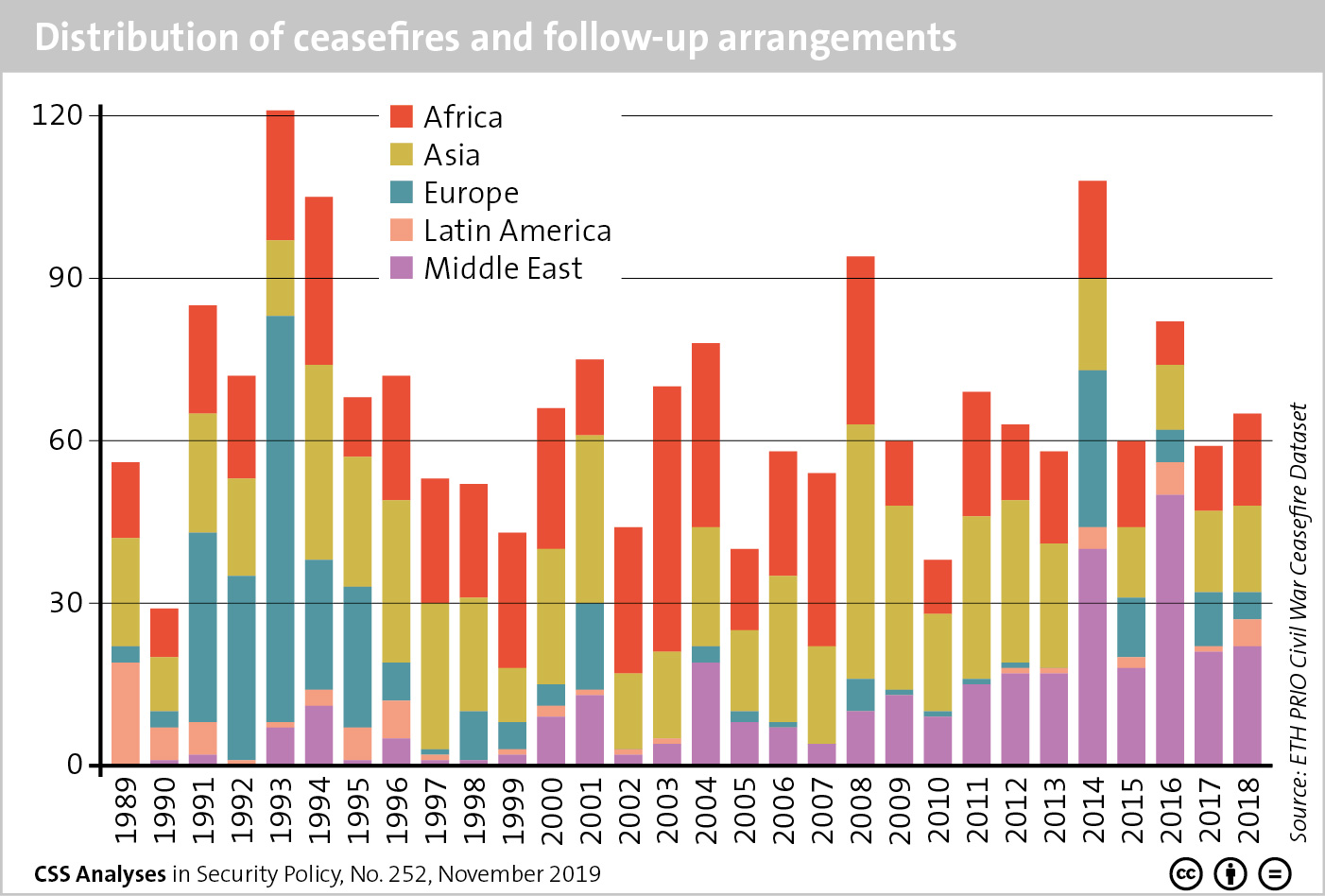 This week’s featured graphic shows the distribution of ceasefires and follow-up arrangements across Africa, Asia, Europe, Latin America and the Middle East between 1989 and 2018. For more on the role of ceasefires in intra-state peace processes, read Govinda Clayton, Simon J. A. Mason, Valerie Sticher and Claudia Wiehler’s CSS Analyses in Security Policy here.

This article was originally published by the Foreign Policy Research Institute (FPRI) in January 2019.

China’s One Belt One Road (OBOR) project was late in coming to Latin America and the Caribbean (LAC). First announced by President Xi Jinping in 2013, OBOR, later renamed the Belt and Road Initiative (BRI), did not arrive in the LAC until 2018, when, at a meeting of the China-CELAC (Community of Latin America and the Caribbean) Chinese Foreign Minister Wang Yi claimed that BRI would “inject new energy into the China-CELAC comprehensive cooperative partnership and open up new prospects.” Given the impressive rise of the People’s Republic of China to the world’s second largest economy—first, by some measures—and the difficulties that many LAC countries were experiencing, it is hardly surprising that Wang’s offer was greeted with enthusiasm. If brought to completion, the integration of the LAC region into BRI would comprise 65 percent of the world’s population and 40 percent of global GDP.

END_OF_DOCUMENT_TOKEN_TO_BE_REPLACED

This article was originally published by IPI Global Observatory on 23 August 2017.

In 2013, Venezuela was a defective democracy experiencing serious breaches of civil and political rights, but with more or less functioning electoral institutions, and accountability between the branches of the state. Today, the country is an authoritarian regime. President Nicolás Maduro’s government crossed into that territory on March 29 this year, when the Supreme Court, following instructions from the executive, stripped the country’s National Assembly of its competences, triggering the wave of demonstrations that continues today (42 a day on average) and that has cost the life of 126 Venezuelans. Another definitive step occurred on July 16, with the election, through massive electoral fraud, of a Constituent Assembly with total powers over the National Assembly and aimed at rewriting the national constitution.

There are two main victims of the Venezuelan crisis. The first are the Venezuelan people, who have not only witnessed a dramatic deterioration of their living conditions, but have also lost the ability to live together in harmony, for an undetermined amount of time. The second victim, on which I focus here, is multilateralism—the ability of states to bring collective solutions to conflicts and crises through institutions and other forms of cooperation.

END_OF_DOCUMENT_TOKEN_TO_BE_REPLACED

This article was originally published by openDemocracy on 15 February 2017.

Since the early 1990s, political elites have enthusiastically embraced the values and practices of democracy in the Americas. At the international level, this enthusiasm translated into collective commitments to defend democracy against its enemies, through specific instruments added to the legal frameworks of the regional organizations existing in the region. The tendency has continued in the new millennium as new organizations such as the Union of South American Nations (Unasur) and the Community of Latin American and Caribbean States (CELAC) have also committed themselves to assist and, if necessary, to sanction those countries in which democracy is breached.

Liberal intellectuals and politicians were quick (maybe too quick) to interpret these regional developments as further proof of the consolidation of democracy in the Western Hemisphere. Yet, it is worth taking a more careful look at this phenomenon, especially in a phase in which illiberal democracies, competitive authoritarian, and truly authoritarian regimes seem to be coming to stay, at least for a while, alongside traditional democracies in the Americas and in Europe.