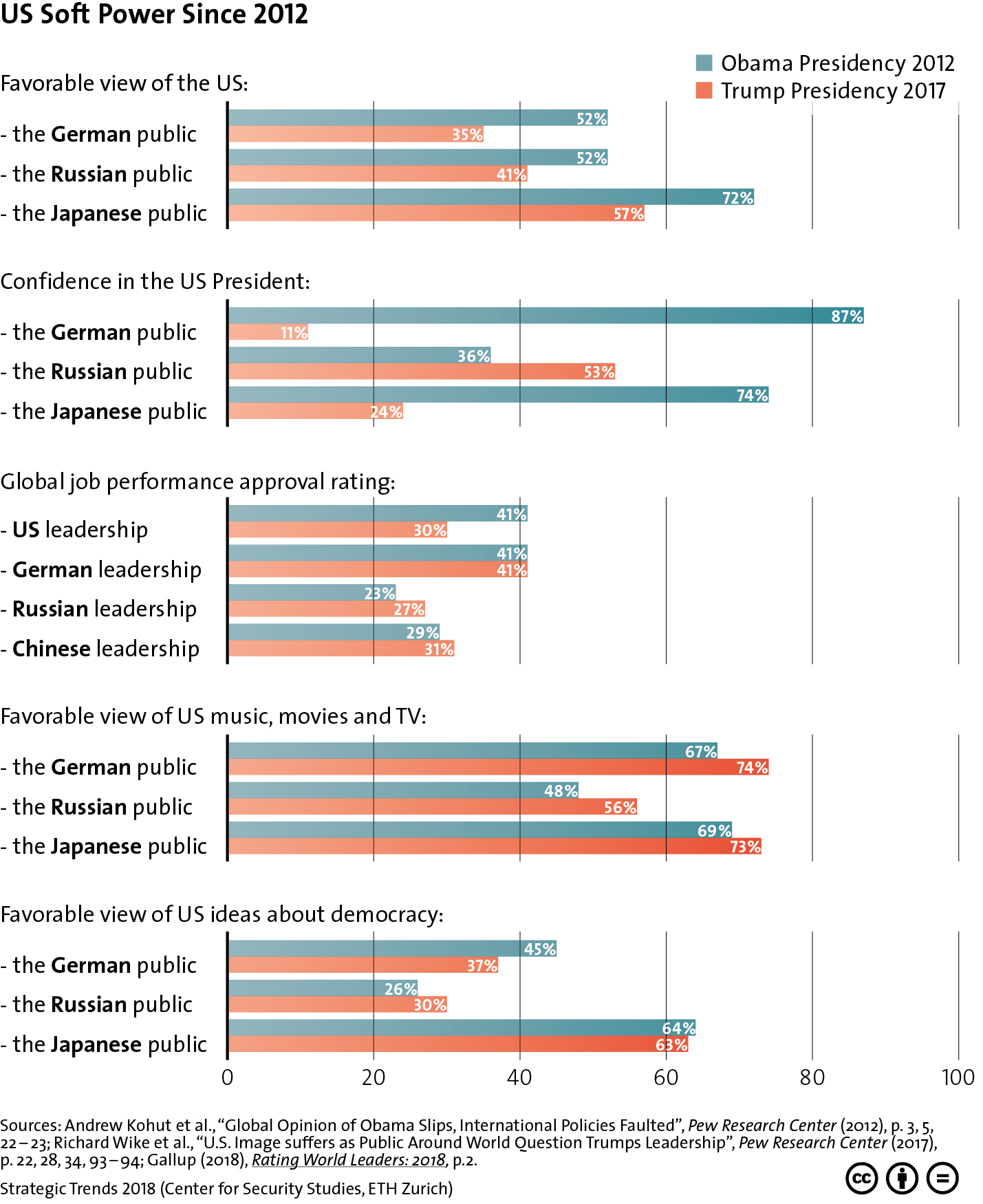 This graphic looks German, Russian and Japanese public opinion of the US under the Obama and Trump administrations.For more on the US’ global leadership role, see Jack Thompson’s chapter for Strategic Trends 2018 here. For more CSS charts, maps and graphics, click here.

NEW YORK – Whenever something bad happens – Iran moving closer to acquiring nuclear weapons, North Korea firing another missile, civilian deaths reaching another grim milestone in Syria’s civil war, satellites revealing an alarming rate of polar-ice melt – some official or observer will call upon the international community to act. There is only one problem: there is no “international community.”

Part of the reason stems from the absence of any mechanism for “the world” to come together. The United Nations General Assembly comes closest, but little can be expected from an organization that equates the United States or China with, say, Fiji or Guinea-Bissau.

END_OF_DOCUMENT_TOKEN_TO_BE_REPLACED

This illustration highlights the disparity between China’s per-capita income and its aggregate income in comparison with other countries.

China is not a superpower, said Major General Pan Zhenqiang, deconstructing one of the “myths” about his country. A retired officer from the People’s Liberation Army (PLA) and deputy chairman of the China Foundation for International Studies, Pan Zhenqiang talked at the Center for Security Studies (CSS) at ETH Zurich last week. He was also a guest of Vivian Fritschi of ISN Podcasts. In his talk Pan said that China is a poor developing country. Is he right? Or is China a superpower, after all? The answer to this question depends on whom you ask.

Chinese leaders themselves perceive their country as a developing one with a number of paramount domestic challenges. The largest share of China’s population lives in rural, underdeveloped areas and there is a large urban-rural income gap. And although China’s per capita income has been increasing at a remarkable pace – it grew more than threefold over the last decade – it is still comparatively low. To anyone familiar with rural China, it is obvious that this is in fact a developing country. But that’s only one side of the coin: even though China is a poor country in per-capita terms, it is a rich country in aggregate terms, due to its immense population.

From a Western perspective, China’s development is usually seen at the macro level: China is the second largest economy in the world today and might surpass the US within the next decade.