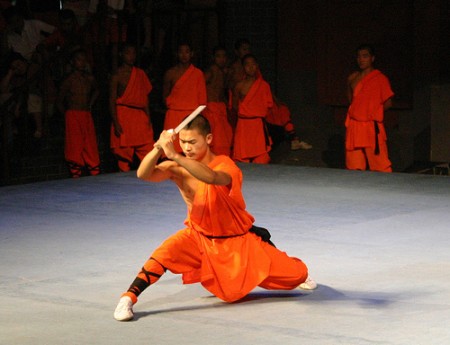 Last week, my colleague Kaisa Schreck wrote an excellent blog post on China. In it she argued that China had already saved the world economy and that it was bound to rule the region if not the world in the near future. Forbes’ ranking of Hu Jintao as the most powerful man in the world seemed to validate this assessment.

I personally think that China is lacking one key element to become a superpower: moral gravitas and appeal. And if we look at history, every powerful region or country has not only been powerful economically or militarily, but also “morally”.

Let’s look at the Roman Empire first. The empire ruled the whole Mediterranean region for centuries and its capital, Rome, had more than one million inhabitants,  a significant number 2000 years ago. The Empire was not only powerful because it could crush its enemies, it was also morally powerful. By taking up Greek philosophy and focusing on philosophical and scientific education, the Romans quickly surpassed their enemies in thought and morality. The arts had a powerful place in Roman civilization and it shined from the shores of Portugal to Iran. Its values of citizenship, arts and philosophy were not only adopted by the Roman elites, but also by many of the neighboring elites.

The Ottoman Empire, on the other hand, was able to dominate not only because of its extensive trade routes and its shipping tactics, but its scientific and cultural practices were also providing the moral basis for its hegemony. The millet system, an example of religious tolerance, as well as its famous Islamic scholars were able to unify various cultures under one moral rule from Vienna to Muscat, thus contributing to the rise of Istanbul as its cosmopolitan core.

When Europe started to rise after the Ottoman Empire, it was rising not only because of the industrial revolution, but because of the ideas of the Enlightenment that started with the French Renaissance. The Enlightenment spread across a divided Europe and soon Europeans were all advocates of the ‘Reason’. This movement coincided with European supremacy in the world economy.

The US was able to go beyond the Enlightenment by providing a new capitalist-democratic model accompanied by a strong human rights regime. But as the US is losing ground on the international stage, we see more and more radical, often explicitly anti-human rights (or at least very selectively human rights-focused) movements spreading across the world, be it the new “right wings” in Europe, or the “Tea Party” movement in the US.

And every time that the moral grounds upon which these powerful entities were based started to fall apart, it led to the rise of another power and to the automatic decline of the Roman Empire, the Ottoman Empire, Europe and now possibly the US. Industrial power is initiated by moral power. The industrial revolution would have never happened if society hadn’t escaped from the confines of religion. Critical thinking and the questioning of the regime are the keys to innovation. And innovation is what creates power.

And China is no exception. China had moral gravitas when fighting against occupiers and corrupt entities in the early and mid-20th century and when it started to implement its version of communism in the country. But years of abuse and failure soon led the country to dilute its communist values into a potentially troublesome, even explosive, mix of capitalist-authoritarianism.

Without a strong moral, artistic, philosophical or scientific reach globally, China is poised to remain an eternal “number 2”. Money, problematic “Asian values” and empty nationalism will never be able to make up for a strong moral, critical and intellectual ‘Enlightenment’. To succeed, China would have to strengthen and spread its philosophical and moral power in the world and to convince the world that the ‘Chinese approach’ is the one best suited for the 21st century. And to that end, China must allow critical thinking and questioning from within its society to flourish.

China could easily take the first step towards a flourishing and vibrant civil society. After all, having moral power starts with the respect of your citizens, a factor I believe China still lacks.