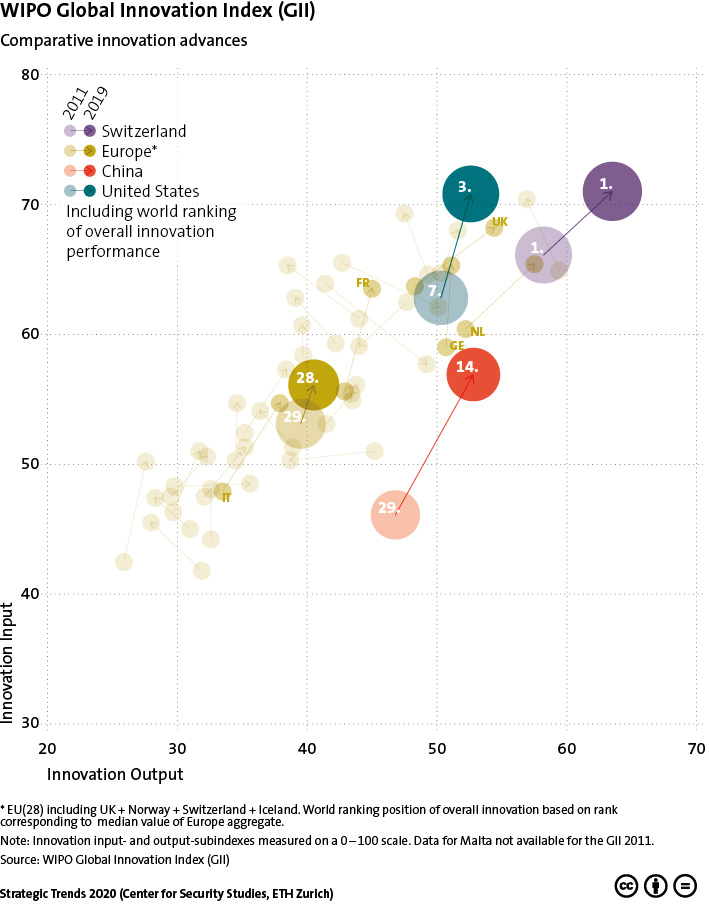 As this graphic illustrates, since 2011 China has increased its investments in innovation to great effect. China’s tech industry now rivals its European counterparts, which puts pressure on European nations to engage in constant economic innovation in order to uphold Europe’s long-held comparative advantage.

For an insight into the implications of China’s Belt and Road Initiative (BRI) and targeted influence attempts in Europe, read Linda Maduz and Henrik Larsen’s Strategic Trends 2020 chapter here.

This graphic shows the key technological innovations of the last two hundred years and forecasts that the 21st century will be shaped by biotechnology. Revisit Claudia Otto and Oliver Thränert’s CSS Analysis to see what this means for the Biological Weapons Convention. For more CSS charts, maps and graphics, click here.

This article was originally published by War on the Rocks on 21 September, 2015.

“Silicon Valley folks? Their main focus is on speed to market.” A senior executive at Raytheon recently uttered this quote in response to the innovation push launched by former Secretary of Defense Chuck Hagel and expanded by his successor, Ash Carter. The remark illustrates a frustration shared across the traditional defense industrial base over a series of “innovation initiatives” being rolled out by the Department of Defense (DOD). These initiatives have been spurred by a growing sense that the Pentagon’s historic technological advantage is slipping as a result of numerous shortcomings: DOD’s flagging research and development (R&D) spending, an abysmal technology transition rate, and questionable returns on industry Independent Research & Development (IRAD). There is no doubt that something must be done to ensure U.S. defense-related innovation remains world-leading. Yet despite DOD’s best efforts, it is far from clear that the department has sufficiently considered how it can further leverage the already existing defense industrial base to support this endeavor. Certainly, “non-traditional” companies should be a larger player in the defense innovation marketplace. But as the previously mentioned Raytheon executive noted, “When you’re making technology in the defense market, you also have to address other aspects, including mission assurance, acquisition compliance — these things are important … there’s an overhead to that.”

END_OF_DOCUMENT_TOKEN_TO_BE_REPLACED

It’s Sweden’s turn to organize the annual European Security Research Conference under its Presidency of the EU. The conference will be held in Stockholm 29-30 September 2009 bringing together around 800 representatives from research, industry, European institutions, public authorities and the security sector. This is the event of the year if you’re going to influence the shaping of policies and research options for Europe’s future.

As the world’s leading open access information service for international relations and security professionals, the ISN naturally attends this event. A series of promising European research projects will be discussed in Stockholm and we look forward to contributing our expertise and reach out to an ever wider audience. More news will follow.

“Innovation Journalism” (InJo) – the word combination does not yield any Google search results before 2002.

The term was truly – and academically – introduced in 2003 by Stanford Professor David Nordfors, his main point being that journalism and innovation are each other’s driving forces.

Today at the GMF workshop offered by Stanford University, we took the concept of  “Innovation Journalism” apart.

How do we define journalism?

If you have a look at the Oxford definition of the word “journalist”, you find the message defined by the medium: newspapers, magazines, radio and TV. By offering such a definition we are bringing Marshall McLuhan back in, and we don’t necessarily want to do that. Strangely enough for our perception, the word “internet” does not appear in the Oxford definition.

Today’s medium is separated from the message, i.e. the content. A new definition of a journalist should refrain from this occupation’s relation with a medium and focus on the audience, Nordfors says. Journalism is all about offering issues of public interest to the broader audience.

And what do we mean by innovation?

Innovation is more than inventing. It’s the process of creating and delivering new value. As defined by Nordfors, innovation stops being exclusive and elitist. For him, innovation is a “language thing,” not a “tech thing.” It’s mostly about language, Nordfors argues, because any new product needs a name, a definition, a business model and a narrative. And all these things are made of pure words.

Innovation and journalism – the missing link

Why is it important for journalists to cover innovation?

To answer this question, Nordfors builds a bridge between democracy and innovation. Democracy implements ideas in society, innovation plants ideas on the market. In the end, innovation also plays an important public role in shaping societal behavior. To exemplify this latter thought: the iPod is deciding how we will relate to music in the future. It’s not parliaments that decide that. The link between democracy, innovation and journalism is that journalism, according to Nordfors, is key for connecting the innovation economy with the democratic society.

And what is innovation in journalism?

To picture this, think of a refurbished newsroom. Traditional newsrooms use strict categories such as science, technology, business, politics and culture. Now, how would you categorize a story, appropriate to postmodern times, relating simultaneously to particle accelerators and modern ballet? Would such a story actually exist?The point is: innovative journalism should write such stories. Journalism crossing categories is innovative.