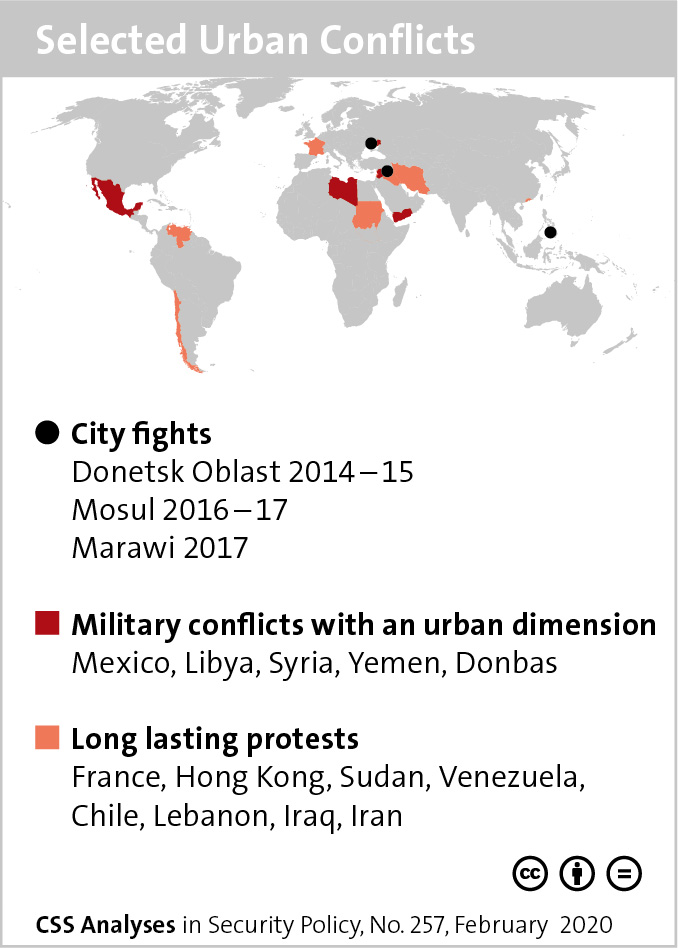 This graphic provides an overview of recent military conflicts and long lasting protests in cities around the world. For insights on how urban areas are becoming primary battlefields in conflicts, see Niklas Masuhr’s addition to the CSS Analyses in Security Policy series here.

This graphic provides an overview of recent military conflicts and long lasting protests in cities around the world. For insights on how urban areas are becoming primary battlefields in conflicts, see Niklas Masuhr’s recent addition to the CSS Analyses in Security Policy series here.

END_OF_DOCUMENT_TOKEN_TO_BE_REPLACED

This article was originally published by the Foreign Policy Research Institute (FPRI) on 21 March 2018.

Aleppo. Mosul. Sana’a. Mogadishu. Gaza. These war-ravaged cities are but a few examples of  a growing trend in global conflict, where more and more of the world’s most violent conflicts are being fought in densely populated urban areas, at a tremendously high cost to the civilians living there. Despite their aversion to urban warfare, American and NATO military strategists increasingly acknowledge that the future of war is in cities. Concurrently, humanitarian agencies such as International Committee of the Red Cross (ICRC) and United Nations High Commissioner for Refugees (UNHCR) are adjusting their response to relief operations in urban centers in real time. This rise in urban violence and the resurgence of warfare in cities comes from three key factors: the global trend toward urbanization, increasingly volatile domestic political conditions in developing countries, and changes in the character of armed conflict.

END_OF_DOCUMENT_TOKEN_TO_BE_REPLACED

This article was originally published by Political Violence @ a Glance on 23 May 2017.

On March 17th, a US airstrike killed nearly 300 people in the densely populated area of western Mosul. This deadly attack – along with other reports of mounting civilian casualties from US airstrikes in Iraq, Syria, and Yemen – are raising questions about whether the Trump administration has relaxed the rules of engagement.

Since entering office, President Trump has sought to reduce the constraints on the use of force imposed by his predecessor. For instance, he has designated parts of Yemen and Somalia as “areas of active hostilities,” giving the US military greater latitude to carry out airstrikes and ground raids. His new plan to defeat ISIS is also expected to include “recommended changes to any United States rules of engagement and other…policy restrictions that exceed the requirements of international law.” So far, both administration and military officials have denied that a formal change in the rules of engagement has taken place. But human rights groups are saying that even the perception of declining concerns over civilian deaths can have a “detrimental strategic impact” on the fight against ISIS, with dire humanitarian consequences.