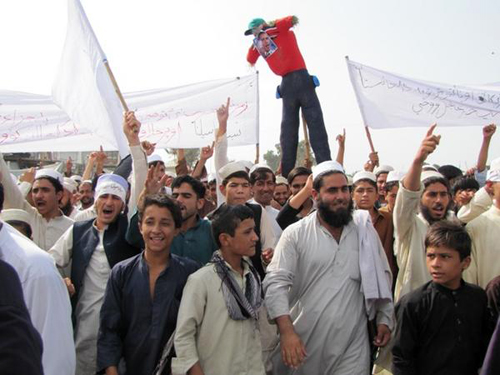 Afghan President Hamid Karzai said that the filmmakers had engaged in a “devilish act” and that insulting Islam is not permitted by freedom of speech. Aimal Marjan, the general director of Information Technology at the Ministry of Communications told Reuters that they had been asked to block YouTube until the film was removed.

In spite of evidence to the contrary, Aimal Faizi, the Afghan president’s spokesperson denied that YouTube had been blocked, saying on Twitter:

We profoundly denounce the barbaric killing of the U.S. diplomat in Benghazi, Libya and approving Karzai government banning U-Tube [YouTube] for precautionary measure of possible uncontrollable uprisings in Afghanistan.

The Taliban has also published a statement condemning the film and has asked the ‘Mujahideen’ to avenge the act, which they claim was perpetrated by the US government: 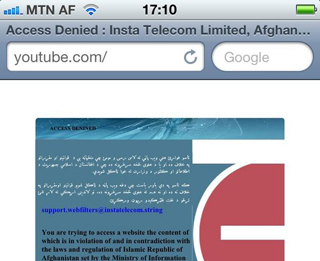 You are trying to access a website the content of which is in violation of and in contradiction with the laws and regulation of Islamic Republic of Afghanistan set by the ministry of Information and Culture.” Screenshot by Ali M Latifi

The Islamic Emirate also calls on all its Mujahideen to stand firm against all the violations against our heavenly book (Quran), Prophet and other sanctums perpetrated by the invading America. The Mujahideen in Afghanistan should avenge these actions of the American government by dealing a heavy blow to its invading troops on the battlefield. Similarly, the Islamic Emirate calls on all of the religious scholars of the country to fully inform the masses about such barbaric acts of America in their sermons and to prepare them for a lengthy struggle.

I just love that these people make these movies to get a reaction out of Muslims, and we never fail to react in a violent way. As someone else said, a prophet of God does NOT need to be defended.

In February 2012 copies of the Koran were disposed of by US troops at Bagram base. The burning of the Koran burning sparked protests across Afghanistan, resulting in the deaths of 30 people – including 4 Americans – and over 200 wounded.

NATO has also warned of possible violent protests across Afghanistan whereas Barack Obama and Hamid Karzai vowed to prevent a flare-up of anti-American violence after the killing of US diplomats in Libya. President Karzai also postponed a diplomatic trip to Norway reportedly because of riot fears. And on Thursday, 13 September, religious leaders gathered in Kandahar to call for calm and peaceful protests over the film.

On the U.S Embassy Facebook page, under a link to a statement by the U.S. Ambassador to Afghanistan, James B. Cunningham, Harris Najib wrote:

I think that responding violently to the movie made by an ignorant fool will fuel the already incorrect stereotypes about Muslims around the world. In the past violent responses to these kind of nonsense videos, innocent people have died on streets. I hope my fellow Afghans will show restraint and engage in civil and peaceful protests.

Sakhidad Hatif, an Afghan blogger, having seen the previous ‘blasphemy’ cases was surprised that this time the Afghan protests did not turn violent:

Last night I went to sleep with the expectation that tomorrow when I watch the news, at least twenty Afghans have ripped each other apart due to the film. But in the morning I heard nothing.

However, protests inevitably reached Afghanistan. On 14 September, Afghans held a rally in the eastern city of Jalalabad. Some of the protesters chanted “Death to America” and set fire to an effigy of Barack Obama..

Protests were also expected in Kabul and other cities of Afghanistan on 14 September. But, they didn’t happen that day.

Atia Abawi, an NBC news reporter tweeted that she was proud of Kabul’s residents.

So proud of Kabul and its people right now. Came back from driving the streets, no protests or angry crowds.

However, the movie nevertheless sparked protests in other Afghan cities and on university campuses. Students in Kabul and Herat staged demonstrations against the film on 16 September.

Afghan Hackers also attacked the website of the Church of God in North Georgia, a move that only reinforces the widespread condemnation of the Innocence of Muslims.

Quran Copy Burning in Afghanistan and the US ‘Exit’ Strategy