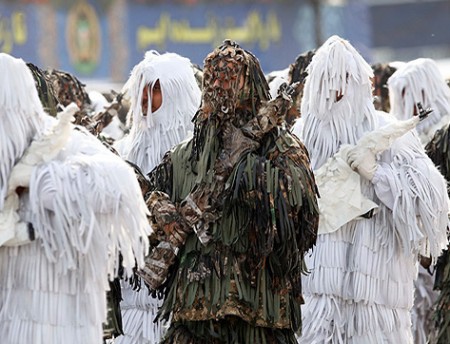 Iranian Soldiers during a parade. Courtesy of The Israel Project/flickr

This article was originally published by E-International Relations on 27 April 2016.

Banafsheh Keynoush is an international geopolitical consultant, foreign affairs scholar, and author of Saudi Arabia and Iran: Friends or Foes? (Palgrave Macmillan, February 2016). The book is based on dozens of interviews with Saudi and Iranian leaders, politicians and decision makers, and rich archival material collected and made available for the first time in English. Drawing on unique insight into the relationship over a span of a century, the author challenges the mainstream fallacy of the inevitability of sectarian conflict or that it is the main cause of tensions between Saudi Arabia and Iran, and instead argues that the relationship can be fixed through increased diplomacy.

Do you think that Iran is seeking to revise the Western dominated regional order in the Middle East?

Iran promotes the view that the security of the Persian Gulf and by extension the Middle East should be guaranteed and upheld by the regional states, rather than by foreign powers. Its view of regional security is somewhat revisionist, aiming to correct the regional order which is influenced by foreign powers including the United States. Tehran believes that foreign power influence does not serve it, because the Arab Gulf states rely on Washington to advance their security while Iran generally views U.S. presence as a threat.

How does Iran view Wahhabism and its influence in Saudi Arabia?

Iran’s clerical establishment has long viewed Wahhabism as a political trend that has emerged in main part to prevent the spread of Shi’ism in the Muslim world. In the book, I show that just as adherence to Shi’ism became the premise of the new Persian nation-state in the sixteenth century, Wahhabism became the premise of the new Saudi nation-state when it first emerged in the eighteenth century.

How does Saudi Arabia view the relationship between Iran and Shi’ism and its impact on Iranian politics?

Saudi views about Shi’ism are rooted primarily within the Arabian Peninsula, where a significant number of Shias have resided for centuries and practiced their faith. Their practices are tolerated, but Shias feel economically and politically sidelined for the most part in the modern history of Saudi Arabia. Saudi leaders have never considered any need to question Iran’s adherence to Shi’ism, but they are dismayed by Tehran’s desire to expand its influence in the Arab world in part by politicizing the Arab Shia communities.

The 1979 Iranian Islamic revolution disrupted the regional status quo, and led Iraq to strengthen its alliance with the Arab Gulf states to contain the revolution. The Iran-Iraq war was in part prompted by revolutionary Iran’s desire to export its ideology into Arab lands. But in fact, Iran and Iraq had never had an easy relationship even prior to the revolution. There were always frequent border skirmishes between them.

How do you think the Iran-Iraq war re-shaped the Saudi-Iranian interactions?

The war disrupted the Saudi-Iranian relationship because Saudi Arabia supported Iraq. Although the choice of supporting an Arab state against Iran was an obvious one for the Saudi leadership, Riyadh repeatedly encouraged Tehran to accept a ceasefire agreement.

Can you describe how you think the balance of power in the Persian Gulf changed after the Iran-Iraq war?

It shifted in Saudi Arabia’s favor as the war contained Iranian and Iraqi regional power.

How is religion being used by Saudi Arabia and Iran in their foreign and security policies?

Religion is used as a foreign policy tool to advance political goals, but it is not the main driver of the Saudi and Iranian roles in the region. The two states are driven to preserve their security in a highly volatile region, if need be by using ideology. But they also both aim to reign in the ideological undertones of their foreign policy behavior, because religion can exert a toll on their security as well if left unchecked.

How do you see the religious dynamic between Saudi Arabia and Iran developing in the future?

The same trends I describe in the previous answer could continue in the future unless political tensions in the Middle East subside. The weaker the Saudi and Iranian states become due to regional insecurity, the more pronounced the role of religion will be in the conduct of their foreign policy behavior.

What do you think are some of the obstacles and incentives for an Iranian-Saudi rapprochement?

The structural imbalances in the region that have aimed to isolate Iran can exacerbate the tensions in the Saudi-Iranian relationship, and impede a rapprochement. Redressing that imbalance by consistently encouraging complementary Saudi and Iranian roles in restoring peace and order in the region can facilitate a rapprochement.

What are the reasons behind the Saudi embassy attack in Iran, and Saudi Arabia’s reaction to the attack?

Iran suggested that Saudi Arabia had deliberately provoked it after the latter ordered Shia cleric Ayattolah Al Nimr’s execution in January 2016. Saudi Arabia does not openly endorse such a view, and believes Iran made a wrong choice by attacking the Saudi embassy in Tehran. The kingdom and a number of its allies in the region severed or downgraded ties with Iran, sending a clear signal of non-engagement with Iran.

In your book you say that the linchpin of Saudi-Iranian relations revolves around U.S. policies in the region. Can you please elaborate on this?

The U.S. has overindulged Saudi Arabia and undermined Iran for the most part of recent history. Neither Saudi Arabia nor Iran are happy about this, as each seeks to develop an interdependent relationship with the U.S. and with each other. Due to a predominance of U.S. policy interests in the Persian Gulf, they have come to view their relationship with Washington as a replacement for the critical ties that bond them together as regional powers and neighbours. Those bonds can be fixed by encouraging Saudi Arabia and Iran to jointly promote a stable region, which will be less prone to preemptive or forward U.S. military actions.

This interview was conducted by Satgin Hamrah. Satgin is an Editor-at-large with E-IR.