Can Europe Become a Nuclear Power? 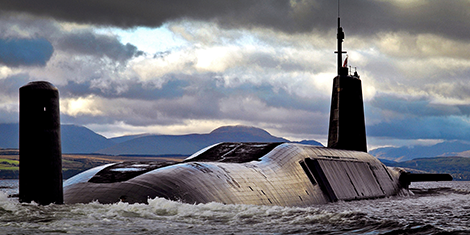 “Do we need the bomb?” asked the front page of Welt am Sonntag, one of Germany’s biggest newspapers, last month. In an essay in the paper, political scientist Christian Hacke answered “yes”, arguing that, “for the first time since 1949, the Federal Republic of Germany is no longer under the United States’ nuclear umbrella.”

It is extraordinary that the anti-nuclear, peace-loving Germans should be toying with such ideas. For 70 years, the NATO alliance has ultimately rested on the belief that, in extreme circumstances, the US president would be willing to risk the destruction of Chicago to protect Berlin. Yet Donald Trump’s catastrophic summer foray into Europe – in which he mused to alliance leaders that, unless Europeans shaped up, the US might “go our own way” – has rendered any such belief untenable.

Meanwhile, Vladimir Putin’s calculated campaign of aggression against European interests, and his repeated demonstrations of readiness to employ all means to project Russian power, have reaffirmed Europeans’ need for credible nuclear deterrence – as the only alternative to accepting a state of chronic intimidation.

But a German bomb? No one wants that: not Germany’s allies; not the international community, which understands that preserving the Treaty on the Non-proliferation of Nuclear Weapons (NPT) is in the common interests of humankind; and not, most importantly, the Germans themselves. Anyway, French and UK nuclear weapons have the technical capability to provide a deterrent umbrella for Europe.

The idea that the French and UK nuclear forces might become some sort of “Eurodeterrent” is hardly new. Paris and Berlin discussed the issue sotto voce at several points in the twentieth century; Germany even glossed its 1974 ratification of the NPT with an explicit reservation of the possible “creation of a European Union with appropriate capabilities”.

It is, of course, hard to envisage a credible offer of a Franco-British nuclear umbrella for European allies and partners being either made or accepted in the immediate future. The United Kingdom, after all, is in the process of leaving the European Union, which hardly inspires trust; while France does not even commit its nuclear forces to NATO. As for the prospective beneficiaries, most (as a forthcoming ECFR report on European attitudes to nuclear deterrence makes clear) have not had to think about nuclear issues since the end of the cold war, and would very much prefer to keep things that way.

But it surely will not take much more of Trump and Putin to make this “head-in-the-sand” posture unsustainable, and to force Europeans to confront what their newly declared ambition of “strategic autonomy” will actually require. And as for the two nuclear powers, Britain might yet get through Brexit with its pledge of “unconditional commitment” to Europe’s security still intact; while France has a young president who has championed the strategic autonomy concept and is not afraid of bold departures. Moreover, the two countries have already taken tentative steps towards mutual nuclear guarantees: the preamble to their 2010 Lancaster House nuclear cooperation treaty affirms that any threat to the “vital interests” of one will bear equally on the other.

Should they wish, then, to offer themselves as joint nuclear guarantors of European security, Britain and France have only to carry on down this path – deepening their nuclear partnership (to cover, for example, nuclear propulsion, and joint targeting), and developing their joint declaratory policy to make it explicitly clear that they see the “vital interests” of their European partners as, in effect, their own.

Of course, to command credibility where it truly matters – in the eyes of the potential aggressor – such “extended deterrence” requires both parties to the arrangement to make consistent demonstrations of mutual confidence. Here, NATO has established the model. The nuclear guarantors must involve beneficiaries in all aspects of nuclear doctrine, policy development, and planning, thereby sharing the relevant risks and burdens. In NATO, this has meant providing bases and aircraft to deliver nuclear bombs; in the European context, where most of the French and all the UK capability is submarine-based, cost-sharing may be an adequate alternative.

“Eurodeterrence” may never come to be. But the UK and France should prepare for the possibility, deepening their existing nuclear partnership and reiterating that Europe’s vital interests are increasingly congruent with their own. Other Europeans, meanwhile, should come out from under the duvet and resume a serious debate about their responsibilities for their own security. Popular speculation about a German bomb may not survive beyond the slack news days of summer – but it has been a welcome provocation nonetheless.

Manuel Lafont Rapnouil is the head of the ECFR Paris office and a senior policy fellow at the ECFR. He is the former head of the political affairs division of the department for UN affairs at the French ministry of foreign affairs and international development.

Tara Varma is the programmes coordinator for the ECFR Paris office.

Nick Witney is a senior policy fellow at ECFR and previously served as the first chief executive of the European Defence Agency.