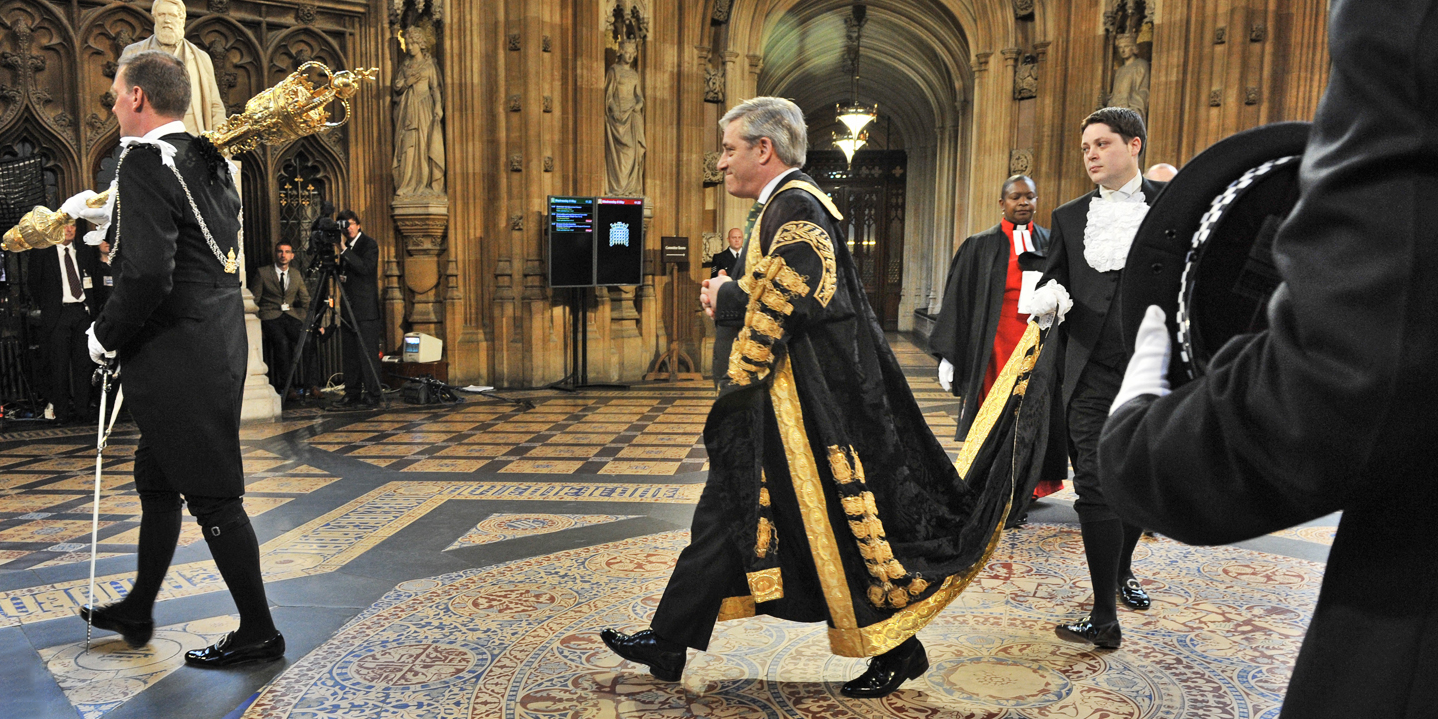 In contexts of severe societal polarization, it is important not to only look for additional, external support to deal with conflict, but to also explore and enhance existing internal mechanisms and roles within a given political system. The UK Speaker of Parliament, I argue, can be exactly such a role. The conflict over whether to leave or remain within the European Union (EU) widened fissure lines in UK society, based around binaries such as nationalism versus internationalism, wealth inequality, centers of urban investment versus deprived regional areas and generational divides within even the same families. In times of crisis and political polarization such as the UK is currently experiencing, the Speaker, despite having different objectives and functions than that of a mediator, remarkably resembles a mediator in some aspects of their role.

In this context, it is therefore enlightening to examine how the Speaker can play a critical role in managing the factions within a parliament, as well as projecting an image of legitimacy within democratic institutions to the public. Like a mediator, a skillful Speaker in the House of Commons can help parties find a way to engage in meaningful conversations rather than in destructive and non-productive disputes. Some of the ways they do this are by carefully managing emotions whilst ensuring that all parties to the conflict are heard and by acting as an impartial third party with a focus on facilitating the process, rather than the outcome.

Stewarding Emotions and Reminding Participants of the Ground Rules

During a conflict, when adversaries have to meet across the table, outbursts of emotion can easily derail the mediation process. A mediator needs to create the right balance between letting emotions be aired, whilst ensuring that these strong feelings do not escalate the conflict.

Managing the outrage that followed Prime Minister Boris Johnson’s prorogation (extending the interim period in which the parliament does not sit or make decisions and unresolved issues can lapse) of Parliament was no mean feat when Parliament was re-opened in September 2019, following the decision of the Supreme Court that it was unlawful. Members of Parliament (MPs) as well as large sections of the public viewed Johnson’s decision as an attempt to avoid scrutiny over Brexit plans. During the angry exchanges in the House of Commons after the resumption of Parliament, Bercow allowed some opinion statements to pass, but reminded the House to focus on the arguments and issues, rather than personalities. This is a classical mediation reframe of separating the person from the problem, which is key to good negotiation because it allows people to work together to solve a common problem, rather than to pit themselves as enemies and further damage any chance of resolving an issue.

MPs are required to address the Speaker rather than each other directly. In a similar way, a mediator can deescalate tension at key moments in a mediation process by asking parties to direct comments through the mediator, which has a moderating effect on their choice of words. In certain cases, mediators must refer to the ground rules and explain the consequences when these are broken. Bercow did this, for example, when MP Dennis Skinner called then Prime Minister David Cameron “dodgy Dave”. The rules of the House of Commons forbid anyone to allude to another member as a liar so Bercow asked him to withdraw the adjective and when he did not, to leave the House. In mediation, it is possible for the parties to have a role in shaping the ground rules and the mediator ensures they are adhered to.

Acting as an Impartial Third Party

Conflict parties must view the mediator as impartial for the mediation to have any chance of success. If the mediator favors one conflict party above the other, trust in the process is quickly broken because mediation relies on both sides being heard without judgement from a third party. In a similar way, once a Speaker is elected by MPs, they must give up their party allegiances and not stand for election under a party political banner.

Bercow promised to be “completely impartial” in his first address as Speaker. Despite this, he publically aligned with the Brexit debate by revealing to university students that he had voted to remain in the EU. This left him in a position where his impartiality could be challenged in a similar way to that in which conflict parties test a mediator. Brexiteers such as Sir Bernard Jenkin threatened him with a parliamentary panel to discuss the role of the Speaker in light of his perceived partiality. Bercow acknowledged the right of MPs to set up a hearing, but strongly rejected the claim of partiality by pointing out the number of times in the past he had granted urgent questions and emergency debates to the Euroskeptics of the House.

A successful mediator must similarly navigate challenges to their authority and be able to demonstrate their impartiality, treating everyone in a fair manner, or with “multi-directional partiality”. Multi-directional partiality involves a greater engagement with all parties and less of a distance from a hallowed position of authority. It better suits the Speaker and the mediator to realize that complete neutrality is not only a myth, but is also unnecessary. This understanding by a speaker or mediator of the distinction between impartiality/multi-directional partiality (i.e. treating everyone in the same way) and neutrality (i.e. having no values, personal preferences, nor closer relations with the parties) is crucial to ensuring they facilitate a balanced discussion and remain empathetic to all sides, whilst preserving the principles of fairness.

Facilitating the Process but not the Outcome

The role of a mediator is to move the process forward, but also to ensure that decisions on content stay in the hands of the parties to come up with their own solutions and retain ownership of the outcome. In the context of the Brexit debates, Bercow didn’t decide on anything of “content”, such as what should be included in the withdrawal agreement, when it should happen, or if it should happen. However, he prevented a second vote on Johnson’s Brexit deal (after it was rejected the first time), citing the ‘same question convention’ of 1604 and arguing that having the same substantive debate was a waste of the House of Common’s time. From Bercow’s point of view, his decision was one which intended to keep discussions moving forward and within an agreed timeframe.

Ensuring all Parties have a Voice

Many have noted Bercow’s commitment to hearing from backbenchers (those who sit in the back benches of the UK Parliament, who traditionally have less power), demonstrated by the fact that during his time in office he allowed more urgent questions than had been the convention in the past. He styled himself as the “backbencher’s backstop”. In mediation too, the need to hear from voices who may otherwise wish to “spoil” the process is essential, as well as from a wide cross-section of society. As a mediator works with the consent of the main conflict parties, there are limits to how far they can persuade them to include or listen to other voices, but it is possible. For a speaker, giving space to backbenchers, who hold less formal power to have their voices heard, reinforces the spirit of democracy.

Learning but not Copying

Bercow’s style was unique and while it is useful to draw lessons from it, a key principle of mediation is to tailor approaches to the context. Thus speakers of parliaments around the world need to find their own distinct style to deal with polarized parliaments. MP Lisa Nandy, in recommending the new Speaker of the House of Commons, Sir Lindsay Hoyle, to the position on 17 December 2019, reminded the assembled parliamentarians that in the context of disorder in UK politics where people felt the ground crumbling beneath them, Hoyle was a symbol that parliament was not just a bastion for the privileged in society. From this position, Hoyle would therefore benefit from not aligning in the Brexit debates, even if he cannot be neutral and may have a strong personal position. He should use the concept of impartiality or multi-directional partiality to inform his behavior. In keeping the process moving forward, he is likely to face some procedural dilemmas which can be minimized by making the reasons for his decisions clear. When enforcing ground rules, he should remain fair and abide by norms whilst exercising empathy. Hoyle should also consider all members who need to have a voice in the debates and keep in mind that the world will be watching. The UK would also benefit from making the role of “Speaker as mediator” a more celebrated one in a society of division, drawing on principles already upheld by the role of Speaker in UK society to encourage forums where people can constructively engage in airing their differences of opinion without resorting to violence.