Jeremy Brickhill’s recent publication “Mediating Security Arrangements in Peace Processes” hits the nail on the head: “Since both the political and technical aspects of security arrangements are important and need to be linked, both political mediators and technical security experts need to know enough of each other’s methods and approaches in order to work together effectively.” Why is a purely political or a purely technical approach to ceasefires detrimental? How does the essence of an effective ceasefire lie in the interaction of the two?

Jeremy Brickhill on the Three Phases of Security Arrangements

The purely political approach to ceasefire mediation argues that the will of the parties to stop fighting is the key ingredient of a ceasefire. Furthermore, once a ceasefire has been reached, it should then be used as a stepping-stone for the real work, which involves finding political solutions to the essential differences between the conflict parties. Alternatively, some third parties even push the political argument further to say that if the political will of the parties is lacking, mediation can be abandoned and political, economic and military pressure should be used to change conflict parties’ cost-benefit calculation so that they sign the imposed agreement. Following these arguments – both of the political mediation angle and the third party power politics angle – there is hardly any need at all for political-technical interaction. If military-technical experts are needed, they should do their job at the bidding of the political actors, but their role is not very important and so they should complete their task quickly and not interfere with the political work. The result of both an extreme political approach to ceasefire mediation, and a power politics approach to trying to impose ceasefires, is that the question of what a ceasefire is and the quality of the ceasefire agreement are largely irrelevant; the key is to get the parties to sign some kind of agreement to stop fighting.

The purely technical approach to ceasefire mediation, in contrast, argues that, yes, the political will of the parties to stop fighting is a necessary pre-condition for a ceasefire. However, at the same time, even if the conflict parties want to stop fighting, if the ceasefire agreement is not technically sound, it will not hold. For this reason, what a ceasefire is and the quality of the ceasefire agreement are pivotal. Politicians may rant and rave, but the technicians actually have the answer and should be left to do their job: the technical quality must supersede political compromises. Military-technical experts should therefore not be pushed around by politicians – be these from the conflict parties or from the third parties.

Brickhill argues that both the political and technical approach to ceasefire mediation in their extreme forms are detrimental, even if both arguments also have elements of wisdom. Therefore, there is a need for greater interaction between the two. The political will of the conflict parties is essential and provides the direction; the technical expertise and quality of the agreement helps the parities reach their goals. For this reason, the parties’ political purpose for the ceasefire agreement needs to be clarified, but the technical terms must also be clearly defined. The agreement requires a coherent conceptual framework and a monitoring and verification system. However, at the same time, these need to be embedded and adapted to the specific political, historical and cultural context.  The ceasefire agreement should spell out who does what when and how in a detailed time plan with corresponding milestones, considering both technical feasibility and political exigencies.

Greater political-technical interaction (but not conflation) in ceasefire mediation can lead to (1) a more contextualized ceasefire agreement, that is rooted in a given context but also benefits from what has been learnt about the technical quality of ceasefires from other contexts; (2) a more strategic way of  linking phases that have to be taken in the security field in the transition from war to peace; and (3) improved ways of linking topics (security, political power sharing, economic, justice, etc.) in a peace process.  Brickhill’s booklet is a real eye-opener for mediators, who he suggests do not need to become security experts, but should start to understand what security arrangements are all about, so as to improve the political-technical interaction and effectiveness of ceasefire agreements. 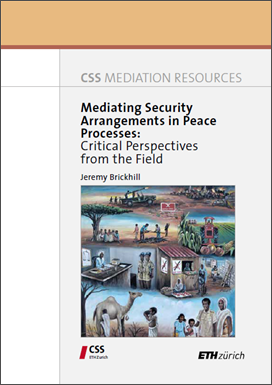 Simon J. A. Mason is a senior researcher and head of the Mediation Support Team at the Center for Security Studies (CSS) ETH Zurich.