But the violence did not end. In early 2015, cattle owned by armed herders, who migrate every year from Chad to the Central African Republic in search of pastures, destroyed your crops, your only means of survival. Desperate, you called up some of your anti-Balaka friends, who were able to overpower the herders and seize some cattle as compensation for the destruction of the crops.

This is not a hypothetical scenario. This is the story of a farmer I spoke with on a trip to the Ouham prefecture in the Central African Republic in February of this year. His experience spans a wide range of non-state violence in the Central African Republic, including clashes between armed groups, communal clashes, and farmer-herder clashes. Although resolving these types of conflicts through mediation can have huge positive effects on the everyday security of the general population, much of what we know about how mediation works focuses on conflict resolution between governments and rebel groups. Articles that analyze the interaction between mediation and peacekeeping have a similar state lens, focusing solely on how these two instruments impact intrastate armed conflicts.

The reality in the Central African Republic, and many other countries, is one of large-scale non-state armed conflict, even in regions where UN peacekeepers are deployed. Armed conflict between the Hema and the Lendu tribes in northeastern Democratic Republic of Congo, the Misseriya and Salamat Baggara in the Darfur province of Sudan, the Lou Nuer and Murle tribes in South Sudan, and the Dogon and Fulani in Mali are but a few examples. And these conflicts are deadly: According to the Uppsala Conflict Data Program, between 2000-2018, there were more battle-related deaths between non-state armed actors during conflicts in Africa where UN peacekeepers were deployed, than there were during conflicts involving government and armed opposition forces in these locations.

Contrary to claims that the UN predominantly engages with elites in the capital to make peace, several recent reports and studies show that UN peacekeepers are increasingly involved in local peace processes aimed at resolving non-state armed conflicts. Evidence from recent quantitative studies suggests that these local UN-supported peace processes are working—at least in the short term. In a forthcoming article that will be published in the Journal of Peace Research, I draw on peacekeeping data collected in Darfur to show how local peace efforts, supported by the UN, produce longer-lasting peace. In another recent article, Hannah Smidt shows that social cohesion workshops organized by the UN peacekeeping operation in the Ivory Coast made communal violence significantly less likely in the subsequent three months.

Conversations during my trip, with UN personnel, government authorities, and local community members, suggest that UN involvement in local peace processes has had a positive impact in the Central African Republic. Several mayors from the Bossangoa area in the Ouham prefecture noted how they worked closely with the United Nations Multidimensional Integrated Stabilization Mission to resolve local conflicts in their municipalities. The Prefect of Ouham said that the involvement of MINUSCA in the local peace process was useful in terms of arranging logistics and guaranteeing the security of participants.

“Now that I have worked for four years in the Ouham prefecture,” said one MINUSCA civilian staff member from the Bossangoa field office, “I realized that local peace agreements are relatively effective in terms of ending fighting between armed groups and stabilizing local communities, though they do not always succeed. We make sure to hold the leaders of the armed groups to these agreements, which often works, though of course not always.”

Armed conflict is ongoing in many parts of the Central African Republic, despite MINUSCA’s positive impact on local peace processes. Although some local peace agreements have brought some form of stability in certain areas, other local agreements have failed. For instance, since December 2015, four peace accords between armed groups have been signed in Batangafo, another major town in the Ouham prefecture. Each was drafted in response to clashes between armed groups, intercommunal tensions, and violence against civilians—but none of these agreements held.

As a MINUSCA information analyst in Bangui pointed out, commenting on the Khartoum Agreement concluded in February 2019: “The national level is more centered towards political issues. If you read the national-level agreements, there is almost nothing on the reasons why the fighting continues, there is nothing on the economy, and there is nothing on natural resources and illegal mining. So, unfortunately, if you do not address these issues, then the armed groups that are pretending to be political actors—while in reality they are more likely criminal gangs that extort as much as they can—will continue to fight to take as much as they can.” 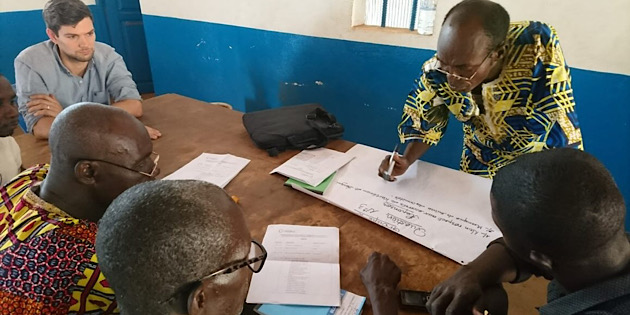 Contributor Allard Duursma planning with local authorities in the CAR.

Only when peace trickles down from the national to the local level will national peace agreements have a positive impact on the everyday security of people like the farmer in northwest Central African Republic with whom I recently spoke.

Allard Duursma is a senior researcher at the Center for Security Studies (CSS), ETH Zurich.