This article was originally published by the Pacific Forum CSIS on 9 November 2016.

Like most American Asia-watchers, I have no clue what the basic tenants of the incoming Trump administration’s Asia policy will be. I have learned from experience to discount at least half of what is said during presidential campaigns: Reagan was going to recognize Taiwan; Carter was going to withdraw US troops from the Korean Peninsula; etc., etc. The challenge is knowing which half not to believe.

While I don’t know what Trump’s Asia policy will be, I have a pretty good idea what it SHOULD be, so allow me to offer some unsolicited advice.

The pivot is dead, long live the pivot. The “pivot” or “rebalance” toward Asia is an Obama slogan which will leave with him – it likely would have even if Clinton was elected – but America’s focus on Asia as a national security priority has been a bipartisan constant since the end of the Cold War and the centrality of the US alliance system in Asia (with Australia, Japan, Korea, the Philippines, and Thailand) – as in Europe (NATO) – has likewise been a bipartisan constant since the 1950s. The going in assumption seems to be that a Trump administration is less committed to maintaining the alliance system as a vital component of America’s security (as well as the security of our allies). If he truly believes this, he needs to say so and address the alternatives and consequences. What he SHOULD do is to reaffirm the centrality of both Asia and the US alliance system to America’s continuing commitment to sustaining peace and security in Asia and beyond. George H.W. Bush and Bill Clinton did this by producing overarching East Asia Strategy Reports; a new one is sorely needed.

END_OF_DOCUMENT_TOKEN_TO_BE_REPLACED

This PacNet Commentary was originally published by Pacific Forum CSIS on 4 March 2015.

As part of the so-called ‘new type of major-country relations,’ there has been a proliferation of official dialogues between the United States and China. But, in the area where mistakes or miscalculation could prove the most disastrous – nuclear weapons policy – Beijing has resisted elevating very constructive unofficial Track 2 and Track 1.5 dialogues (involving government and military officials in their private capacities, along with outside scholars and experts) to the official Track 1 level. A meaningful official dialogue on strategic nuclear issues is needed to prevent lingering suspicion and distrust about each other‘s capabilities and intentions from damaging overall US-China relations. This will not happen, however, until Washington accommodates what Beijing perceives to be its legitimate security concerns and clarifies its own objectives, and Beijing realizes that further delay could undermine its long-term interests.

END_OF_DOCUMENT_TOKEN_TO_BE_REPLACED

At a recent international conference on nonproliferation and disarmament, a colleague asked, somewhat irreverently (but not irrelevantly), “Now that Obama has been re-elected, will he finally earn his Nobel Prize?” It’s a fair question.

Hopes were high within the international disarmament community after President Obama’s 2009 Prague speech when he pledged to move toward a nuclear weapons-free world. But those who cheered the loudest then are among the most disappointed now, frustrated over the slow progress toward this goal.

To be fair, there were a few other challenges on his plate: an economy and financial system in disarray; two messy, unfinished wars in Afghanistan and Iraq; the United States’ international authority at a record low; an increasingly polarized and politicized domestic scene; other pressing priorities (universal health care being not the least); and more.

END_OF_DOCUMENT_TOKEN_TO_BE_REPLACED 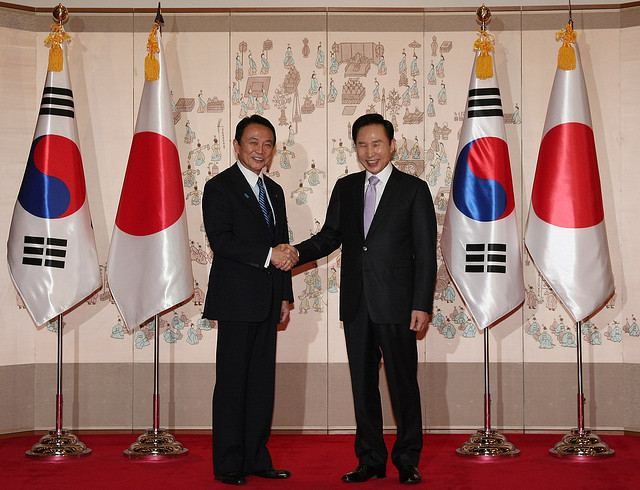 This old Russian proverb comes to mind whenever I think of current Japan-Korea relations. The Japanese, it would appear, are eager to forget the past, while the Koreans can’t seem to see beyond it. Isn’t it time for America’s two key Northeast Asian allies to work toward a better future with both eyes open?

It some instances the flare-ups represent mere political opera with little of real substance at stake. But the latest cause for tension – the ROK government’s cancellation of both the June 29 signing of the General Security of Military Information Agreement (GSOMIA) and its plan to pursue an equally sensitive (but sensible) military Acquisition and Cross-Servicing Agreement (ACSA) with Japan – has serious national security implications and also affects Washington’s relations with both nations. It also cost one of South Korea’s more forward thinking strategists, senior presidential secretary for national security strategy Kim Tae-Hyo, his job. His “sin”? He put Korea’s national interests ahead of public opinion.