This article was originally published by the Federation of American Scientists (FAS) on 23 April 2015.

Over the past few months, several US defense and intelligence officials have stated for the record that China is planning to build significantly more nuclear-powered missile submarines than previously assumed.

This would potentially put a bigger portion of China’s nuclear arsenal out to sea, a risky proposition, and further deepen China’s unfortunate status as the only nuclear-armed state party to the nuclear Non-Proliferation that is increasing it nuclear arsenal.

US Projections For Chinese SSBNs

China does not provide information about how many nuclear submarines it plans to build, but US government officials and agencies occasionally give projections.

The most recent comes from the commander of US Pacific Command (PACOM), Admiral Samuel Locklear, who in his prepared testimony to the US Congress earlier this month stated that in addition to the three Jin-class SSBNs currently in operation, “up to five more may enter service by the end of the decade.”

National Intelligence Director James Clapper was a little less specific in his testimony to the Senate in February when he predicted that China “might produce additional Jin-class nuclear-powered ballistic missile submarines.”

The Pentagon’s annual report on Chinese military issues from June 2014 stated that three Jin-class SSBNs (Type-094) were operational and that “up to five may enter service before China proceeds to its next generation SSBN (Type-096) over the next decade.” That projection was not seen as implying that five additional SSBNs would be produced but that a total of five might be built. But in hindsight it could of course be seen as similar projection as the latest PACOM statement.

PACOM’s projection of “up to five” additional Jin-class SSBNs is a doubling of the projection of “4-5” SSBNs that the Office of Naval Intelligence made in 2013. That projection followed the first estimate from late-2006 of “a fleet of probably five” submarines.

Production of five additional SSBNs by the end of the decade would require fielding one SSBN per year for the next five years, a production pace that China has yet to demonstrate. The first three Jin SSBNs took more than a decade to complete and a fourth boat is rumored to have started sea trials in 2014. The fourth SSBN might be the one seen on commercial satellite images in the dry dock at Huludao in October 2013.

Google Earth images from 2014 and 2015 do not show SSBNs at Huludao, only attack submarines. However, unassembled 10-meter diameter hull sections seen at the shipyard in December 2014 indicate that construction of additional Jin SSBN hulls may be underway (see image below). 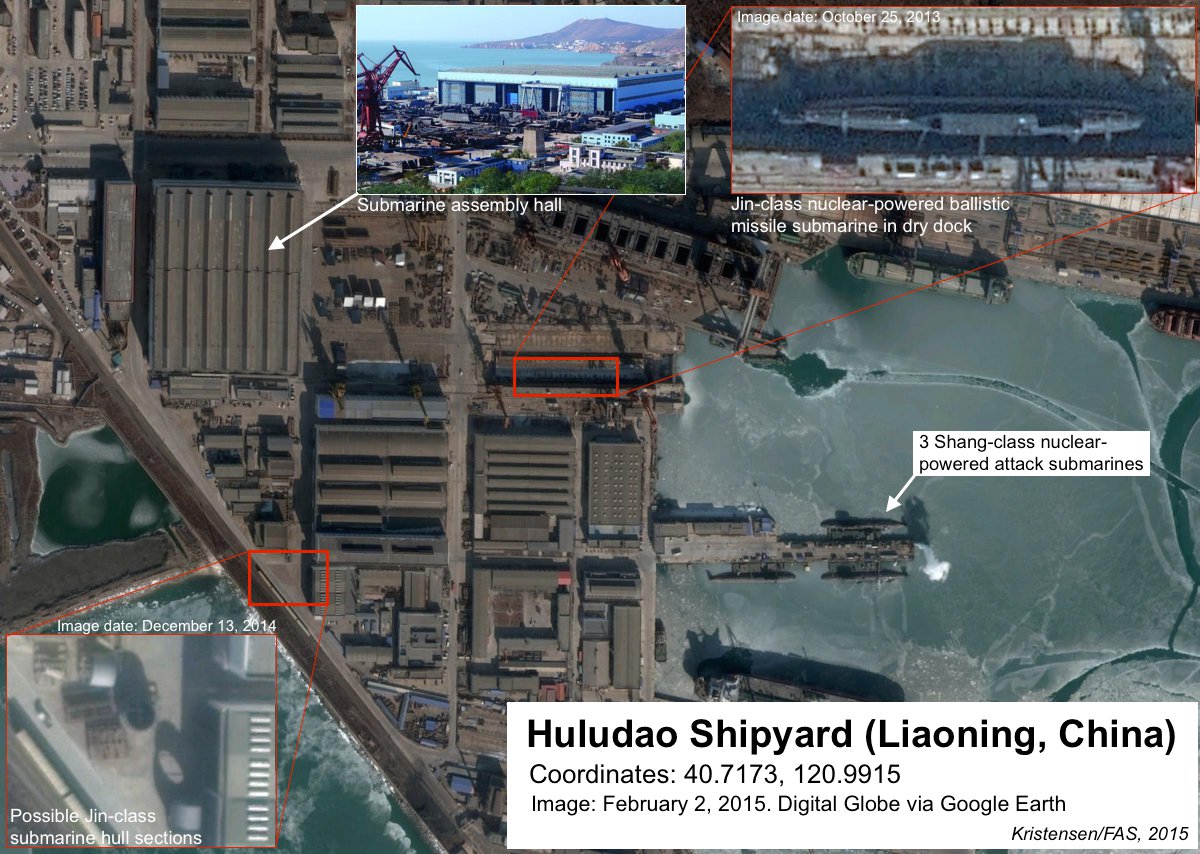 Construction of additional Jin SSBNs obviously would have implications for the size of China’s nuclear arsenal. With each submarine capable of carrying 12 Julang-2 (JL-2) long-rang ballistic missiles, the low- and high-end projection of a fleet of 4-8 submarines would be able to carry 48-96 missiles with as many warheads. (Despite occasional claims on the Internet that the JL-2 carries MIRV, the US Intelligence Community assigns only one warhead to each missile.)

We estimate that China has a stockpile of approximately 250 nuclear warheads of which nearly 150 are for land-based missiles, 48 for submarines, and perhaps 20 for bombers. Some have speculated that China might have several thousand nuclear weapons, but former USSTRATCOM Commander General Kehler in 2012 rejected this saying that “the Chinese arsenal is in the range of several hundred” nuclear weapons. If China builds eight Jin SSBNs, it would presumably have to produce more warheads for their additional missiles. This could increase the stockpile to around 300 warheads (see table below). 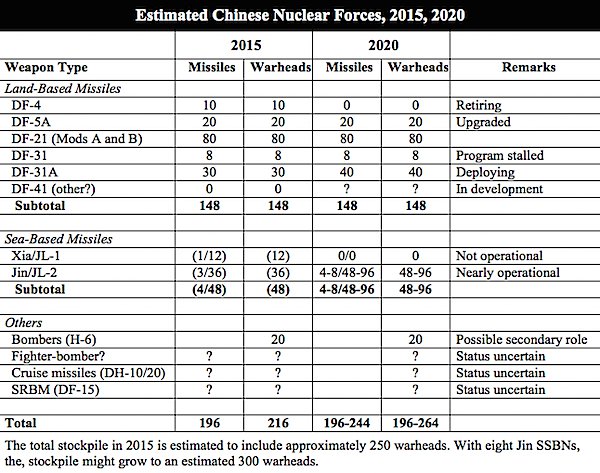 Other weapon systems have also been rumored to have nuclear capability, although status is uncertain: The DH-10 ground-launched land-attack cruise missile is listed by Air Force National Air and Space Intelligence Center (NASIC) as “conventional or nuclear”; the DH-20 (CJ-20) air-launched cruise missiles was listed in 2013 by US Air Force Global Strike Command the DH-20 (CJ-20) as nuclear-capable; and a CIA intelligence memorandum in 1993 concluded that China “almost certainly has developed a warhead” for the DF-15 short-range ballistic missile and predicted that deployment of a nuclear-armed DF-15 would start in 1994. A nuclear test in January 1972 was with a small bomb delivered by a fighter-bomber (Q-5), although it is uncertain if the capability was ever operationalized and fielded.

If China is indeed building significantly more Jin SSBNs, as the statement by PACOM implies, then it is a surprise that raises a number of questions.

The first question is whether it is accurate. The PACOM projection is above and beyond the estimate of 4-6 SSBNs projected by the Office of Naval Intelligence in 2013. The Jin-class is a work in progress and the submarines are noisier than Soviet Delta III SSBNs developed in the 1970s. Presumably the Chinese navy is working hard to make the Jin SSBNs survivable, but up to eight would be an expensive experiment. And China appears to be designing a newer SSBN type anyway, the Type-096. Projections such as these often prove too much too soon, so only time will tell.

But if China were to deploy up to eight Jin SSBNs with up to 96 missiles, it would be a significant shift in China’s nuclear posture, which up till recently was almost entirely focused on land-based nuclear weapons. And this is odd. Why, after having spent significant sources on building mobile ICBMs to hide in forests and caves across China’s vast territory to protect its nuclear deterrent from a first strike, would the Chinese government chose to deploy a significant portion of its nuclear warheads on noisy submarines and send them out to sea where US Navy attack submarines can sink them?

A more important question is how China would actually operate the SSBNs. The Central Military Commission (CMC) does not normally hand out nuclear weapons to the military services but the whole point of having SSBNs is to hide nuclear weapons in the oceans as a secure retaliatory capability. It would be a significant change for Chinese nuclear policy if the CMC loaded warheads on the submarines and deployed them outside Chinese territory. Perhaps they will not be continuously deployed in peacetime but serve as a surge capability in a crisis.

And China does not have much (if any) experience in operating SSBNs on lengthy deterrent patrols. It has only recently started operating nuclear-powered attack submarines on lengthy patrols, including into the Indian Ocean, but the SSBNs have yet to conduct one. PACOM predicted the first would happen last year, but that didn’t happen. Now they predict it will happen this year. We’ll see.

As a party to the nuclear Non-Proliferation Treaty (NPT), a significant increase of the SSBN fleet would further deepen China’s unfortunate status as the only nuclear-armed state part to the treaty that is increasing the size of its nuclear arsenal.

This publication was made possible by a grant from the New Land Foundation and Ploughshares Fund. The statements made and views expressed are solely the responsibility of the author.

Hans M. Kristensen is the director of the Nuclear Information Project at the Federation of American Scientists where he provides the public with analysis and background information about the status of nuclear forces and the role of nuclear weapons.