China dropped the price of their currency to an almost a historic low. It’s called “currency manipulation.” Are you listening Federal Reserve? This is a major violation which will greatly weaken China over time!

The term “currency manipulator” has no regulatory import or effect, but the accusation escalates tensions between China and the United States. On the same day, the Chinese currency, officially the renminbi yuan, had devalued to a rate of 7.05 per US dollar – meaning that a dollar converts into more renminbi than before, thereby insulating them from the effects of US tariffs.

American presidents as far back as Ronald Reagan have complained that the People’s Bank of China as central bank, completely controls the renminbi exchange rate, and keeps it undervalued. Since 2012, though, the Chinese government has allowed market forces to have influence. However, the bank has the ultimate say, every morning announcing a rate that all traders must obey. The trigger for President Donald Trump’s tweet was the announcement that, on August 5, the renminbi had breached the 7.0 renminbi-per-dollar level that had been held since 2008.

Simple calculations illustrate how the exchange rate between the renminbi and the US dollar can profoundly affect profit or loss for Chinese exporters and US importers. The extra cost for the average US household is estimated at $2380, or a total additional outlay for the US economy of $295 billion each year, if hypothetically all consumer items imported from China were replaced by US domestic production.

Some economists, including those at Capital Economics, had expected the yuan to devalue further to 7.3 per US dollar by the end of the year. Further devaluations are by no means certain as the Chinese government is beset with contrary pressures and issues mixed signals. On August 5, the People’s Bank of China issued a statement suggesting that the devaluation was driven by “unilateralism and trade protectionism measures and the imposition of tariff increases on China.” The next day, the bank issued a more conciliatory statement: “China has refused to engage in a competitive devaluation despite the US escalating trade tensions from 2018, nor has it used [the exchange rate] as a tool to address [the trade conflict].”

Pressures to devalue are immense, considering that as many as one in seven jobs in China’s organized sector are in export-oriented firms. Creating and maintaining jobs has been a priority of Chinese leaders since 1949, although pressure is easing as the population plateaus. More than 100 million jobs are likely related to China’s export sector, including 16 million devoted to exports to the US.

There are pressures not to devalue, too. The central bank controls the exchange rate by fiat, but also seeks to present an image of a responsible economic superpower – not a reactor to erratic policies of the US government. Also, the European Union has made similar complaints about China’s undervalued currency.

Another pressure not to devalue comes from the central bank’s aversion to capital flight. The enormous middle and upper-class wealth bottled up inside China seeks to diversify its assets by converting some into other currencies or apartments in Manhattan or Vancouver. The People’s Bank of China’s rules restrict unbridled selling of renminbi for US, Canadian or Australian dollars, but the selling pressure remains strong, and the currency has been devalued since 2014 due to such pressures coming from within China. A final reason not to devalue: The cost of imports to the Chinese economy would rise commensurately. China imports $1.731 trillion worth of goods, not far behind the US total. Higher local renminbi import costs could also conceivably trigger inflation. 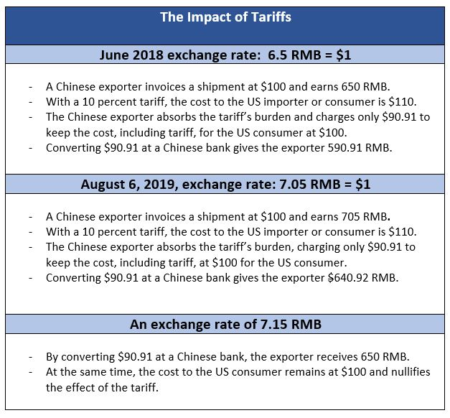 Today’s Chinese are on the cusp of competing considerations regarding the renminbi exchange rate, though historically this was not the case. Deliberate devaluations and undervaluation of the currency remained Chinese policy for 25 years, and that policy of undervaluation from 1980 to 2005 made China the “factory of the world.”

With Mao Zedong’s death in 1976, the Chinese population already stood at 931 million and despite a decline in that growth rate due to the one-child policy, up to 14 million new jobseekers entered the labor market each year. With the ascent of Deng Xiaoping, the Chinese liberalized their domestic economy and launched a conscious policy of devaluing the renminbi to jumpstart China’s export engine and create good jobs.

Incrementally through 1989, then dramatically in the 1990s, the renminbi was devalued to benefit Chinese exporters – from 1.80 renminbi per dollar in August 1981 to 8.72 by January 1994, an almost fivefold increase in exporters’ revenues. Along with a spirit of entrepreneurship, mobilization of often state-supported capital and willingness to “price low,” factories mushroomed to fulfill the eager foreign demand.

By June 2005, under pressure from American and European administrations, the Chinese strengthened ­ the renminbi – from 8.27 in June 2005 to 6.05 per dollar in January 2014. Since 2008, despite what Donald Trump may assert, the Chinese have kept their currency more or less stable in the 6.0 to 7.0 range.

Both China and West have benefited greatly from this trade relationship. As many as 700 million Chinese have been lifted out of poverty, with another 600 million considered middle-class or affluent by international standards due to globalization and a growing domestic market. Export experience forced Chinese firms to compete with western companies. About 650 million consumers in the US and EU also benefited greatly from reasonably well-made Chinese products, purchased at a much lower cost than if the items were made domestically. The annual consumer benefit of Chinese imports to the US consumer is at least $295 billion. Since this does not include industrial or intermediate goods, the overall benefit to the US economy may well exceed $400 billion annually. 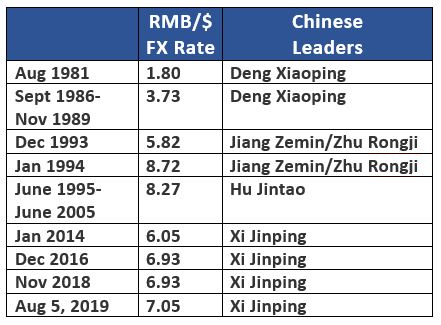 Of course, Chinese imports have also displaced some American and EU jobs. US manufacturing jobs today number around 40 percent of the jobs in 1980. At the same time, US manufacturing output in dollar value zoomed by 250 percent, and the US remains without question the most competitive and productive producing nation on earth. Studies by economists at Boston Consulting Group, the Wharton School and the Center for Business and Economic Research at Ball State University explain this discrepancy by concluding, “…only 13 percent of the overall job losses in manufacturing had resulted from trade.”

The explanation for the sharp decline in US manufacturing jobs, accompanied by a big surge in output, is automation, robotics and information technology in which US companies have invested massively since 1980. Critics will aver that, whether the cause is automation or globalization, the net result is the same – loss of jobs, especially in rust-belt US states and parts of Europe. This is true, and part of the anti-globalization backlash. Many of the displaced have found new jobs and “overall” unemployment rate in the US and Europe is at low levels. Such news offers little comfort to those who lost jobs and now work harder at lower pay. Such is the nature of the modern global economy. A segment of the US and European population is worse off, but “overall” and “on average,” Asia, the US and Europe have greatly benefited over the past 40 years.

Farok J. Contractor is a professor in the Management and Global Business Department at Rutgers Business School.