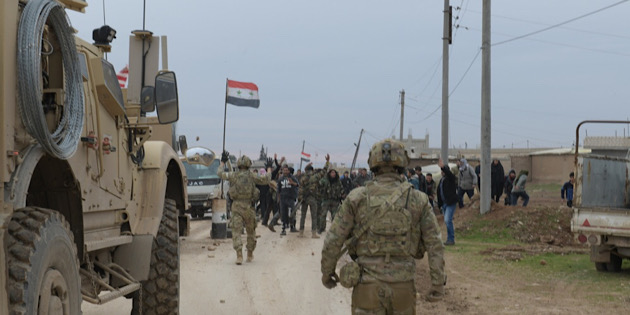 Nine years since the Syrian uprisings first began, what has the toll been on the country and its population?

This week marks the ninth anniversary of the war in Syria, which has evolved from peaceful protests in 2011 as part of the “Arab Spring” to a multi-level conflict involving both regional and major power players. It is the most complex conflict to have emerged from the Arab uprisings. (For a timeline of events since the Syrian uprising began, see below.) Today, no fewer than six interlocking conflicts are being waged inside Syria:

The engagement of external actors and the waging of proxy conflicts in Syria has compounded and protracted the conflict, ensuring that a lasting political settlement is likely a distant prospect.

The war in Syria has exacted an enormous humanitarian toll on Syrian civilians. The estimated death toll in 2016 was 400,000 before the United Nations stopped counting. War crimes and atrocities have become routine acts in Syria, including the use of chemical weapons as well as the targeting of medical facilities and schools. The Assad regime and its allies have been held responsible for the majority of these violations.

The economic toll of the war inside Syria has also been devastating. Housing, schools and businesses have sustained significant damage. A solidly middle income country prior to the outbreak of conflict, Syria is now considered a low income country by the World Bank. More than 80 percent of Syrians live below the poverty line. As of early 2017, the World Bank estimated that losses in gross domestic product (GDP) amounted to $226 billion, four times Syria’s GDP in 2010.

The battle in Idlib is often characterized as the last throes of the war. What does it really mean for the trajectory of the conflict?

The ongoing conflict in Idlib—the last anti-Assad Syrian rebel stronghold in Syria—underscores that the conflict is far from over. In many ways, Idlib is a microcosm of the conflict in Syria in all its dimensions.

Humanitarian dimension. The humanitarian crisis provoked by the recent Assad regime offensive has led to the worst single episode of displacement since the conflict began: 961,000 civilians, primarily women and children, have been on the move since December 1, 2019. Fleeing the offensive,they are pinned up against the Turkish border, which has remained closed since 2015. The current crisis has taken place amid harsh winter conditions with humanitarian assistance unable to keep pace with rapidly expanding needs. Children, in particular, have suffered, with some dying from exposure.

Geostrategic stakes. The fighting in Idlib also illustrates the complexity of the Syrian conflict and underscores the significant geostrategic stakes at play. In this case, the conflict pits Turkey directly against the Syrian regime. Russia has supported the regime with significant airpower, while Iranian backed militias have played an important role on the ground. Turkey, which has lost at least 59 soldiers in the fighting, has doubled down on its military presence in Syria. Ankara has used drones, artillery and F-16 fighter jets against Syrian regime targets, including downing three Syrian warplanes in as many days. Despite a March 5 cease-fire negotiated between Russia and Turkey, fears remain that Turkey and Russia could be drawn into direct military conflict.

Role of extremists. Extremist organizations including Huras al-Din, the al-Qaida affiliate based in Syria, and Hayat Tahrir al-Sham (HTS), which has been designated as a terrorist organization by both the United Nations and the United States, also play a role in the drama unfolding in Idlib. A January 2020 U.N. report estimated that HTS has 12,000-15,000 fighters in Idlib, while Huras al-Din has between 3,500 and 5,000 fighters. While their numbers are quite low relative to the three million civilians living in Idlib, Russia has exploited the presence of these groups on the ground to justify the offensive. Moscow also accuses Turkey of supporting HTS and not fulfilling its obligation to separate these fighters from more moderate factions as stipulated in a September 2018 de-militarization agreement.

What are the key elements of the March 5 cease-fire between Russia and Turkey? Will it last?

Unfortunately, the March 5 cease-fire is unlikely to last. Cease-fires have a history of breaking down in Syria, and the current agreement does not offer much reason to expect otherwise. The fundamental points of contention between Russia and Turkey are not resolved through this agreement. Specifically, the agreement does not provide an answer to the more than one million IDPs who are trapped at the border and unable to return home either because their homes have been destroyed or their towns are now under regime control. Nor is it clear that the Assad regime will restrain itself and not renew its offensive in an effort to claw back more territory in Idlib. The issue of how to manage groups like HTS and Huras al-Din also remains outstanding. As such, the cease-fire only offers a short-term reprieve before the next round of violence.

Mona Yacoubian is Senior Advisor to the Vice President of Middle East and Africa at the United States Institute of Peace.