Amri was from Tunisia and had arrived illegally in Italy in 2011. The New York Times reported that after he had showed signs of radicalism, Amri was classified as a terrorism risk in 2014 – one of a group of a few hundred individuals only – before making his way to Germany in 2015. In Germany he had been under covert surveil­lance for more than six months. Italy and Germany had failed to deport him due to a lack of cooperation by his home country.

After the Berlin attack, Amri had travelled for three days and 1,000 miles across Europe. A train ticket found on his body showed he had come to Sesto San Giovanni from Chambery in France via Turin. European right-wing politicians, including Marine Le Pen, the leader of French far-right National Front, and Nigel Farage, the former leader of the UK Independence Party, responded by demanding an end to the Schengen agreement, a historic deal signed by five European countries in 1985, which had led to the creation of Europe’s borderless Schengen Area. 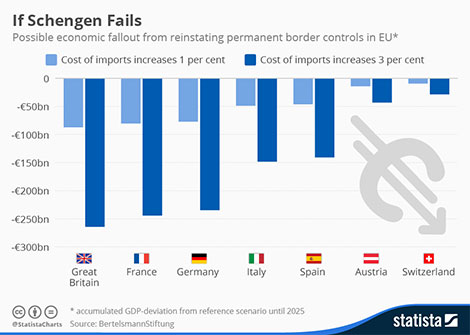 Are borders ever the answer?

Few national borders are absolutely impermeable, and controls may fail due to fake and stolen documents. The Chicago Tribune reported that in 2015 around 170,000 people escaped detection at the US border with Mexico and 200,000 eluded capture when adding those who entered by sea. This is barely half of people who entered the US illegally. The wall that made Berlin one of the most difficult places to cross the border could not stop illegal crossings. The wall only reduced the number of escapees to 868 per annum during the 1970s and to 334 per annum between 1980 and 1988.

Aviation security measures are considered most tight in the world of travel and transport – but two passengers were able to board Malaysia Airlines Flight 370 on stolen passports. The Berlin suspect had used at least six different aliases under three different nationalities, reported the Daily Mail.

The threat often lies within: “Not one Paris attacker has been identified as a Syrian refugee”, Mashable wrote. All people named in connection with the Paris attack of 13 November 2015 were French or Belgian citizens who held European passports. The BBC reported that on 23 December 2016, Australian police detained six men and a woman – four Australia-born. Three are suspected to have planned a Melbourne Christmas Day terror attack which Australian Prime Minister Malcom Turnbull called one of the most substantial plots to have been disrupted in recent years.

According to Eurostat, it is estimated that the European Union’s citizens aged 15 or over made 1.2 billion tourism trips in 2014, for personal or business purposes – 25.1% were to destinations outside the country. 1.7 million people cross European borders every day to get to work. Waiting and inspection times at the borders need to be factored into the prices of goods, as well as the required changes to the highly cost-optimized just-in-time concepts – largely applied in the automotive indus­try – and the efficient goods supply out of European distribution centres. Consumer prices would rise due to the forced slowdown, necessary adjustments and increased logistics costs. Many products would disappear from supermarkets – at least temporarily. The Bertelsmann Foundation warns that reestablishing permanent border controls in Europe could produce losses of up to 1.4 trillion euros over 10 years.

The current terrorist threat requires collaboration across all European countries, the use of advanced technol­ogy and a common European anti-terrorism strategy. Instead of investing time, money and energy in individual and isolated efforts to protect each country, Europe could be made much safer through consolidating budgets and other resources to better protect the outer borders of the EU and leverage advanced digital technology. The most effective way would be for all European countries to unite under one strategy – for example in a “homeland security alliance”. There is little chance that European countries with long and highly permeable coastal borders can manage the protection challenge alone. The effort cannot be shared but needs to be concentrated where needed.

The exchange of security-relevant information should be mandatory. Country authorities need to be able to authenticate every individual and check for security risks. Facial-recognition software on surveillance cameras, which is available yet still rudimentary in many places, needs to be improved.

Blockchain technology – which can ensure the authenticity of goods – will possibly help in future to track the origin of freight. The transport of weapons and explosives would become significantly difficult. Manufacturers have already started to use blockchain technology to confirm the authenticity of luxury goods. The AMBER alert, a child-abduction alarm system that distributes alerts via TV and radio as well as emails and text messages, could be transformed into an effective measure to put the entire European population at the disposal of its own security system.

Even the most secured borders have proven to be permeable. And borders cannot stop local-born and locally operating terrorists. Political leaders need to explain why digital and coordinated European measures are better suited to protect the lives of European citizens and visitors than the reinstallation of intra-European borders.

The situation demands an act of solidarity across all governments in Europe. In its own interests, the private sector is required to support this effort. Leaders could leverage the current threat as a historic chance to unite Europe under an urgently needed common security vision and execution plan.

This blog was originally posted on the World Economic Forum Agenda.

Wolfgang Lehmacher is the Head of Supply Chain and Transport Industries at The World Economic Forum.