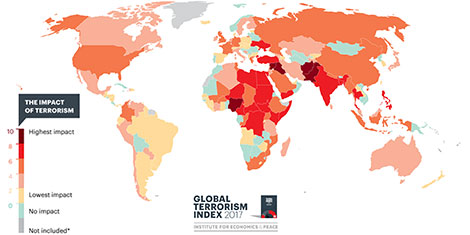 The annual Global Terrorism Index (GTI) is produced by the Institute for Economics & Peace (IEP) and provides a comprehensive summary of the key global terrorism trends in analysing the direct and indirect impact of terrorism in 163 countries.

The positive news in this year’s GTI however is offset by an increase in the spread of terrorism. The number of countries that had at least one death from terrorism increased from 65 countries in 2015 to 77 in 2016. This is more than at any time in the past 17 years, with two out of every three countries in the Index, or 106 nations, experiencing at least one terrorist attack.

ISIL defied the positive trends within the index with their deadliest year to-date. ISIL killed 50 per cent more people in 2016 as compared to 2015 in taking over 9,000 lives. Most of these deaths occurred in Iraq, which meant that Iraq once again ranked as the country most impacted by terrorism.

ISIL has also been the driver behind an increase in terrorism in Europe and other developed countries. There has been a 67 per cent increase in attacks and a nearly 600 per cent increase in deaths since 2014. But many of these deaths were caused by a small number of attacks that inflicted very high casualties. In fact, just three attacks accounted for 44 per cent of all deaths from terrorism in developed countries between 2014 and June 2017. These attacks included the November 2015 Paris attacks that killed 137 people, the July 2016 Nice truck attack that killed 87 and the June 2016 Orlando nightclub shooting that resulted in 50 deaths.

However, ISIL’s diminishing capacity has coincided with a positive shift in the first half of 2017, with a decline in the number of deaths; although this analysis excludes Turkey and Israel. 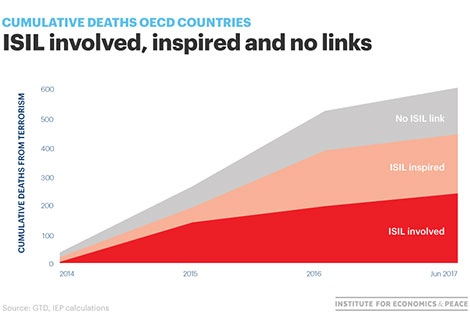 Associated with this trend was a change in terrorist tactics used in OECD countries. Since 2014, there has been a general shift towards simpler attacks against non-traditional and softer civilian targets. A greater number of attacks were foiled by security services, with half of the attacks using bombs and explosives thwarted. Two years ago, only a third of these types of attacks were foiled by security services. These more sophisticated types of attacks involve more people and planning, and therefore are more likely to be detected. Less sophisticated attacks that can be executed at lower cost can be more difficult to detect.

The 2017 GTI report also highlights how terrorism remains unevenly spread throughout the world, as illustrated by the above map. Central America and the Caribbean continues to be the least affected region. There were only 12 deaths recorded in 2016, which accounts for less than 0.4 per cent of all terrorism deaths. Meanwhile, 94 per cent of all terrorist deaths are located in the Middle-East and North Africa, sub-Saharan Africa and South Asia.

The report also highlights a strong correlation between the drivers of terrorism, the presence of armed conflict and political violence. The analysis finds that 99 per cent of all deaths over the last 17 years have been in countries either in conflict or with high levels of political terror. This shows that terrorism is often used as a tactic within an armed conflict or against repressive political regimes. It also demonstrates the risks of political crackdowns and counterterrorism actions that can exacerbate existing grievances and the drivers of extremism and terrorism.

To access interactive maps on the Global Terrorism Index and to view the full report go to http://visionofhumanity.org .

This article has been published under a Creative Commons Licence and may be republished with attribution.

Murray Ackman is Research Fellow at the Institute for Economics & Peace.