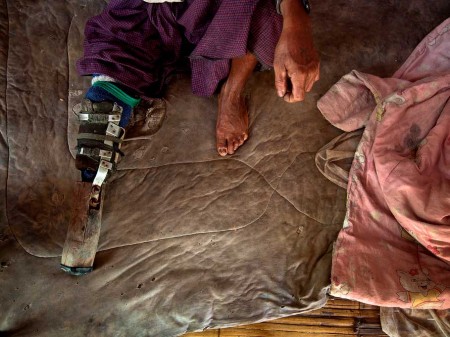 Former rebel fighter Lahpai Hkam has been in pain every day since a landmine destroyed his lower right leg during a battle with government soldiers 18 months ago in Myanmar’s northern Kachin State.

“The artificial leg that I was given last year doesn’t fit properly and it rubs on my stump causing a lot of pain,” he said in a hospital in Laiza, the de facto capital of the Kachin Independence Organization (KIO), the political wing of the Kachin Independence Army (KIA), which has been fighting for greater autonomy from the Burmese government for the past six decades.

According to rebel Kachin surgeon Brang Sawng, such stories are common and the number of landmine injuries is on the rise. END_OF_DOCUMENT_TOKEN_TO_BE_REPLACED

Drones and Drug Politics in China and Myanmar Burmese drug lord Naw Kham and fellow gang members Hsang Kham from Thailand, Yi Lai, and Zha Xika from Laos were executed by China  on March 1, 2013 after being found guilty of killing 13 Chinese sailors on the Mekong River in 2011.

The execution grabbed the world’s attention for two reasons. First, Chinese state-run TV networks aired the execution parade, a decision which enraged many people in Myanmar and even in China. Second, the Chinese government admitted that it considered the use of drones in 2012 to capture Naw Kham who was then hiding in a rural village in Laos. It was the first time that China publicly acknowledged that it had acquired drones.

Naw Kham’s execution triggered widespread discussion about his criminal activities. Known as the ‘Godfather of the Golden Triangle’, Naw Kham led the 100-strong Hawngleuk Militia in the Shan State border town of Tachilek in Myanmar which engaged in drug trafficking, kidnapping and hijacking. With Myanmar as its heartland, the notorious Golden Triangle in mainland Southeast Asia is the world’s second largest producer of opium after Afghanistan. END_OF_DOCUMENT_TOKEN_TO_BE_REPLACED