Local Peace Processes and the Protection of Civilians 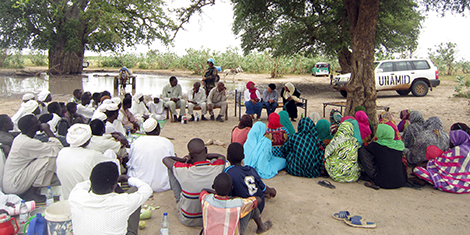 This bloodshed extends to the wider population with a great deal of the violence against civilians commonly taking place in these local conflicts. Armed conflict between the Hema and the Lendu tribes in northeastern Democratic Republic of Congo (DRC), the Misseriya and Salamat Baggara in the Darfur province of Sudan, the Lou Nuer and Murle tribes in South Sudan, the Dogon and Fulani in Mali, and Christian and Muslim armed groups in the Central African Republic (CAR), are but a few examples of local conflicts that have resulted in a huge number of civilian casualties in the context of peacekeeping missions.

The need to address local conflicts is also recognized by the UN. In 2014, the UN Security Council authorized the UN-African Union Mission in Darfur (UNAMID) to support the mediation of community conflict, and mandated the UN Mission in South Sudan (UNMISS) to facilitate inter-communal reconciliation in areas at high risk of conflict. In June 2019, when renewing the mandate of the United Nations Multidimensional Integrated Stabilization Mission in Mali (MINUSMA), the Security Council decided that one of the mission’s strategic priorities in terms of civilian protection should be to reduce intercommunal violence and re-establish state authority. Furthermore, while the Agenda for Peace in 1992 made mention of the word “local” zero times, it appears 84 times in the High-level Independent Panel on Peace Operations (HIPPO) report (in a report of 104 pages). Indeed, the HIPPO report concludes that local conflicts places pressure on the UN to respond.

In addition to militarized responses, UN peacekeeping staff frequently engage in mediation efforts aimed at the conclusion and implementation of a negotiated settlement in local, non-state based conflicts, in the framework of their protection of civilians (POC) mandate. This is not an easy task considering the proliferation of armed actors in locations of UN peacekeeping.

Contemporary peacekeeping operations face a situation that is best described as “keeping many peaces.” For this reason, a recent report by the International Peace Institute on local mediation in CAR is aptly titled “Peace by Pieces,” reflecting the many different peacemaking initiatives in locales across the country. The multiplicity of conflicts makes it extremely challenging to respond, even for well-staffed peacekeeping missions. The chart below illustrates the increase in the number of conflict dyads in locations where UN peacekeeping is present in Africa over time.

*A conflict dyad is a pair of armed actors that engage in armed conflict resulting in more than 25 battle-related deaths in a given calendar year. The civil war dyads refer to conflicts fought between a government and a non-state armed group. The non-state based dyads refer to conflicts between non-state armed groups, including rebel groups, militias, and communities. See: Therese Pettersson, Stina Högbladh, and Magnus Öberg, “Organized Violence, 1989-2018 and Peace Agreements,” Journal of Peace Research 56, no. 4 (2019). Chart: Allard Duursma Source: Author’s coding based on UCDP data

With such challenges, the question arises whether or not the UN

in fact responds to local conflict. In a recent article, Séverine Autesserre claims that because the UN favors top-down deals struck with elites, its peacekeepers too often fail to meet their most basic objectives, watching helplessly while war rages.

Yet, a recent data collection on peacemaking efforts in the context of local, non-state based conflicts paints a different picture.2 The UN has on average been involved in 36 percent of the non-state based conflicts in sites of UN peacekeeping between 2000 and 2018. This figure is roughly similar to the UN’s involvement in national-level conflicts in Africa. Moreover, the UN’s involvement in local conflicts seems to have increased over time.

The data further suggests that around 55 percent of the peace processes in which the UN was involved led to the termination of the non-state based conflict in the next year, as opposed to 35 percent when the UN was not involved in a peace process. We should thus neither romanticize local peace processes and the UN involvement in these processes, nor broadly dismiss them.

An example of a successful UN effort to curb local fighting is the 2008 involvement of UNAMID staff, together with Darfurian native administrative leaders, in a peace process between the Rezeigat and Tarjam tribes in Darfur. This collaborative process terminated the armed conflict between these groups. Another example is the work of MINUSCA in CAR, where it has contributed to the striking of local agreements between different non-state armed groups, including anti-Balaka and ex-Séléka groups.

For example, Human Rights Watch noted in 2003 that many national rebel groups in the DRC supported local militias in their conflicts in Ituri province as a way to expand their own base of power on the national level. Similarly, several observers have pointed out how local conflict in the Kasai region of the DRC is fueled by national-level stakeholders in Kinshasa, who support rival militias as way to crack down on rebel parties.

On the other hand, the resolution of higher-level conflicts often paves the way for the resolution of local conflicts. For example, an internationally mediated peace process that began in 1999 finally led to the inauguration of the Transitional Government of the DRC on July 18, 2003. This new government began to regulate local conflicts in Ituri. In spite of having supported the Hema against the Lendu, the peacemaking effort by the government between the Ituri militias in Kinshasa on August 22 led to a memorandum of understanding in which the militias agreed to work with the government to restore state authority across the region.

Similarly, a peace agreement concluded between the Sudan People’s Liberation Army (SPLA) and the Sudanese government in 2005 was followed by settlement in 2006 between the SPLA and a major rival southern armed group supported by Khartoum, ending much of the local conflict between rival armed groups in southern Sudan. These examples suggest that higher-level peace can trickle down to the local level, at least temporarily.

A more recent example is the mediation effort by the UN Mission in the DRC (MONUSCO) aimed at resolving conflict involving the Patriotic Resistance Front of Ituri (FRPI). In its effort to resolve this conflict, MONUSCO has not only pursued a bottom-up approach of carrying out community consultations, it also has pursued a top-down approach of engaging the government in the peace process. As Ralph Mamiya puts it in a report from 2018: “The mission has used this network of contacts to build the basis for dialogue from the local to the national level, serving as a behind-the-scenes facilitator rather than a visible lead.”

Hence, when responding to local conflicts, it is important for UN peacekeeping staff to be aware of whether and how a given local conflict is linked to national-level or transnational conflicts, and to try and make the connections between these conflicts a positive one that helps to curb violence. A UN report, published in 2017, rightly noted in this regard that the UN has a comparative advantage as peacemaker to connect conflicts on different levels: “peacekeepers often are better connected than other actors to national and local stakeholders that can positively influence local conflicts. Peacekeepers can leverage these networks to address local conflicts.”

The UN can also link the local and national level through its capacity building efforts, supporting the host government in its responsibilities to protect civilians. Capacity building activities conducted by UN peacekeeping staff are often siloed. While some peacekeeping staff are busy building the capacities of ministries and government institutions, others focus on the capacities of local actors. However, this is not always the case. For instance, UN Civil Affairs in the DRC has both worked on the restoration of state authority and on local reconciliation, trying to link both. This might serve as a promising blueprint for capacity building activities in other missions.

There is broad consensus that POC requires not only a militarized response, but also resolution of the armed conflicts that provide the context for attacks on civilians. This means that the UN and other actors must work towards resolving local conflicts, and also to “link up” peace processes on the transnational, national, and local levels. Special Representatives of the Secretary-General (SRSGs) should of course continue to lead all high-level negotiations, and civil affairs officers will continue to mainly focus on the local level, but both would benefit from greater cooperation. The many interlinkages between local, national, and transnational conflict and their grave impact on civilian populations call for the creation of effective links between conflict resolution efforts at all different levels.

This article is part of a series on protection of civilians (POC) being published on the Global Observatory to mark the twentieth anniversary of the first thematic Security Council resolution on POC.

Allard Duursma is a senior researcher at the Center for Security Studies (CSS) at ETH Zurich.