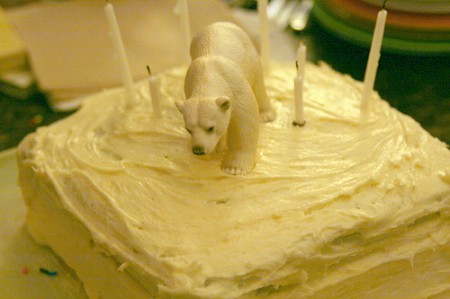 For those (still) interested in climate change issues, two things are happening next week that are worth to ponder:

First, Global Warming is turning 35! As announced on the blog of the RealClimate website, the term “global warming” was used for the first time in an article by Wally Broecker in the journal Science on 8 August 1975. Happy Anniversary!

Second, a UN Climate Change Confererence will be held next week (2  – 6 August 2010) in Bonn, discussing  possible contributions by both industrialized and developing countries to reduce emissions. Further issues to be discussed include how to adapt to climate changes, slow down deforestation and develop new technologies – and how all these measures can be financed. The conference is intended as a further preparation for the sixth meeting of the Parties to the UN Framework Convention on Climate Change (UNFCCC), which will take place in Cancun, Mexico, in November and December 2010.

Yet the global optimism prior to last year’s Copenhagen Summit, when there was so much hope that a newly elected US president who promised change and truly seemed to care about the environment would finally lead the world into a new, environmentally more responsible era, has all but vanished.

And all that despite the highly publicized BP oil spill in the Gulf of Mexico, which dramatically reminded us of the price we’re paying for our oil addiction; despite the fact that Asia this summer is experiencing some of the highest temperatures ever recorded, and that Russia and the US have been affected by this summer’s record heat wave; and despite news that the melting of Arctic sea ice has been accelerating at a faster pace than predicted.

Furthermore, the climate scientists accused of having fudged their data prior to Copenhagen to strengthen their case for man-made global warming amidst the “climate-gate” media frenzy last year have just been cleared of all the main allegations by an independent British panel. And two leading climate research centers have reportedly just published the “best evidence yet” of rising long-term global temperatures.

But all this new evidence underlying the urgency for action is failing to translate into political commitment. The latest signal in this regard has come from the US Senate, which abandoned efforts to pass a comprehensive climate change and energy bill this summer. Yet most commentators agree that without a clear commitment from the US to cut emissions, big developing countries like China and India are unlikely to move on this front.

Can the zeal for climate change action be revived?

For resources on the issue of climate change, check out our ISN Special Report Answering the Climate Call, which includes a wealth of links to articles, organizations and primary resources on the topic.