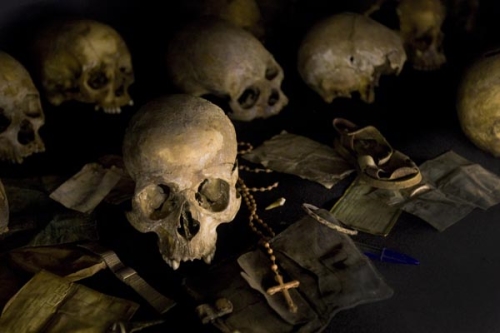 Despite receiving much international attention at their outset, little is known about what the courts actually accomplished. This is surprising. For the past three years, I have been analyzing court data and conducting research in Rwanda to better understand this unique legal system whose punishments for the “genocidaires” (or those involved in the genocide) would likely be seen as light in many other countries.

In the aftermath of the genocide, Rwanda’s basic infrastructure and legal institutions were in shambles.

Trust in public institutions was low. This was hardly surprising, as government institutions had been involved in the planning and execution of the genocide.

The United Nations was quick to create the International Criminal Tribunal for Rwanda (ICTR) in 1994 to “prosecute persons responsible for genocide and other serious violations of international humanitarian law committed in the territory of Rwanda and neighbouring States, between 1 January 1994 and 31 December 1994.”

But, the ICTR could only handle a fraction of the perpetrators (to date 93 people have been indicted by the ICTR), leaving Rwanda’s legal system overwhelmed by the vast number of citizens suspected of committing genocidal crimes.

Time was of the essence. Rwanda’s prisons were well over their capacity. It was clear that it would take decades to try all of the cases.

It was in these circumstances that Rwanda’s new political elite launched the gacaca courts as an ambitious transitional justice project to address crimes of genocide.

In 2002, the pilot phase of the project began. Following tradition, community members elected panels of judges to preside over trials within their communities. All adult Rwandans were expected to participate. Unlike the traditional gacaca courts, however, there was strong involvement from the state.

In total, an estimated one million people were tried within the gacaca courts. Each defendant could face multiple trials for 1) planning, inciting, or supervising the genocide; 2) killing or committing other acts of physical violence; or 3) committing crimes against property, such as looting or theft.

When the courts closed in June 2012, nearly two million trials had taken place. The majority of trials (86%) ended in a guilty verdict, though appeals were also possible.

People convicted of crimes against property were typically ordered to pay the victim (or their family) restitution for the damage. Others reached a court-approved settlement with the victims of their crimes. This often involved work for victims and communities, such as building houses and schools.

Those convicted of more serious crimes faced prison terms ranging from a few months to life -— the harshest penalty since the death penalty was abolished in 1998.

The average prison sentence was 19 years, though there were also various mechanisms to reduce sentences, due in large part to prison overcrowding.

For example, almost one-third of those given prison sentences were allowed to spend half of their sentence performing community service, such as constructing roads, building schools and homes, and planting gardens – sentences that likely sound very light for convicted genocidaires. A few even received amnesty if they confessed their crimes, a move which some suggest was linked to issues of prison overcrowding.

As Rwandans reflected on the gacaca courts in interviews with me, many expressed positive views of how the courts operated. Others pointed to shortcomings, suggesting that the courts are an example of victors’ justice and lamenting that many judges who were initially elected were later accused of participating in the violence themselves.

By Western legal standards, the gacaca courts had serious limitations. The defendants did not have legal representation and standards of evidence were questionable. People were also given lighter sentences if they confessed, which placed a premium on confessions and may have even encouraged false ones.

Overall, the courts endeavored to strike a balance between formal and informal, community-based and state-driven, traditional and contemporary, and punitive and restorative.

As such, the system occupied a unique place not often encountered by traditional legal systems. Indeed, responses to mass atrocity have often been top-down, and hybrid community-based models are relatively new territory.

Gacaca’s complexity and uniqueness inevitably had shortcomings. That said, the system’s ability to prosecute a massive number of suspected perpetrators in a devastated post-genocide environment is an accomplishment in itself. In fact, other countries could perhaps learn from the goal of integrating punitive responses (like prison sentences) with more restorative ones (like community service).

Hollie N Brehm is an Assistant Professor of Sociology at Ohio State University.

This work is licensed under a Creative Commons Attribution-NoDerivatives 4.0 International License.