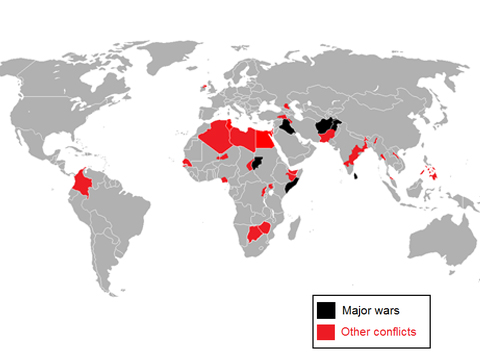 It seems paradoxical to regularly hear of “neglected” or “forgotten” conflicts. Jan Egeland, former UN Under-Secretary-General for Humanitarian Affairs, described the war in Northern Uganda as the “biggest forgotten, neglected humanitarian emergency” in 2003. Our partners, such as the International Crisis Group, write about Congo’s forgotten Katanga crisis or Pakistan’s forgotten Balochistan conflict. And Forgotten Diaries, a multiple-  award- winning project, has been exclusively covering forgotten conflicts since 2008. When policy makers, the media, and researchers talk about forgotten conflicts again and again, can we really call them forgotten?

There is little doubt that branding a conflict forgotten or neglected will channel attention to it, often with the effect of increasing political pressure and humanitarian assistance. It is hard to argue against the idea that humanitarian assistance should be purely need-based, and rooted in the universal application of human rights. If done in a systematic manner, naming and shaming states that do not follow need-based principles could help allocate aid more effectively. Saudi Arabia, for instance, after criticisms of its religious and ethnic selectivity, donated $50 million for the overwhelmingly Christian victims of the Haiti earthquake (yet Haiti was hardly forgotten by other donors or the mainstream media).

So, how can we identify forgotten conflicts? Other than being a catchy term, it is difficult to capture what it really means for a crisis to be forgotten. The IFRC’s 2006 World Disasters Report on neglected crises claims that the concept conceals as much as it reveals.  Let’s take a look at the approaches used by Medicines Sans Frontier (MSF), the United Nations (OCHA/CERF) and the European Commission (ECHO) to operationalize and define the concept:

Which of these approaches best identifies forgotten conflicts? The MSF’s approach is probably too narrow; it focuses solely on media attention and only looks at US television coverage. Also, the selection is limited to conflicts in which the MSF is present. The UN identifies forgotten conflicts based on their relative unmet funding needs. It presents a relatively robust methodology, but only accounts for financial flows that pass through OCHA’s Financial Tracking Service. Development aid, remittances and other unreported items are ignored, which undermines the validity of this approach. The most comprehensive approach is taken by ECHO: its composite indicator of forgotten crises takes funding needs, media coverage, bilateral development aid and the perceptions of ECHO staff on the ground into account. Its complexity however, might be its main weakness; and it is also not entirely plausible to weigh all four criteria equally.

All three approaches select conflicts based on disparities between the perceived scale and the actual funding and/or media coverage. But if the aim is to ensure more need-based humanitarian assistance, why bother including the media? The MSF’s focus on media might be related to its reliance on private donors (which is not the case for the other two organizations). Media plays a pronounced role in how, and for which crises, donors put money at MSF’s disposal. It is more puzzling to see why ECHO includes an indicator to measure media coverage: after all, who would mind a lack of media attention, if funds are distributed on the basis of need alone? Political pressure, one might argue, could be the reason.

Flagging forgotten crises is important, because it puts pressure on governments and other donors to provide humanitarian aid on the basis of need alone. But the concept is toothless unless it builds on transparent and explicit indicators. Unfortunately, operationalizing this concept is an arduous task, which might also suggest why the MSF’s top ten list was shut down in 2010. Yet, despite methodological weaknesses, it is a positive development that humanitarian actors invest in identifying forgotten crises. Those who do so demonstrate the will to allocate money where it is needed the most. And while forgetting about robust methodology is a serious flaw, forgetting about impartiality is much worse.