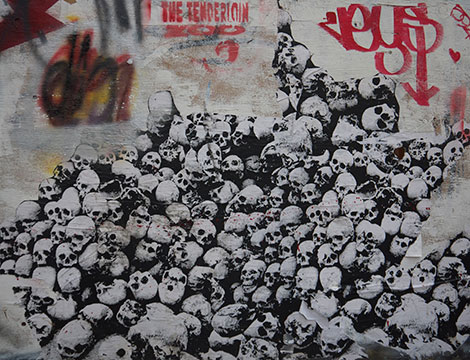 Image courtesy of davitydave/Flickr. (CC BY 2.0)

This article was originally published by World Affairs in June 2017.

There is a war going on over the interpretation of history. A search for a “correct” version of the past has been launched in a number of countries, often by embittered nationalist forces, as in Poland. But the most aggressive assault is being orchestrated by dictators like Vladimir Putin, and China’s Communist Party leadership.

There is much at stake in this revisionist enterprise. The most alarming goal is to reappraise leaders like Joseph Stalin and Mao Zedong, to whitewash their atrocities and ensure that, at least for a domestic audience, they are presented as heroic figures whose crimes were miniscule in comparison with their achievements. Another objective is to depict the country in question as both the ultimate victim and the ultimate winner.

The reassessment of Stalin dovetailed with Putin’s promotion of a narrative in which Russia is a great power that recovered from the chaos of the Boris Yeltsin era and overcame the hostility of determined enemies. According to a revised curriculum that Putin commissioned, Russia’s dark chapters—its domination of Eastern Europe, the Stalinist purges—were understandable responses to the country’s encirclement by foreign foes. Approved history texts paint a picture of an all-wise Russian state, under both Stalin and Putin, whose requirements always take precedence over the needs of the individual.

In China, official histories continue to falsify the events of Mao Zedong’s Great Leap Forward, a collectivization campaign that serious scholars rank among the most lethal politically inspired catastrophes of all time, with an estimated 30 million people left dead from famine, forced labor, and other causes. Communist Party officials do not acknowledge anything approaching the full dimensions of the tragedy. Nor have they admitted that the party, and especially Mao, was responsible. Often, they blame the weather.

Chinese leaders may be even more concerned about presenting the “correct” interpretation of history than their Russian counterparts. An updated official version of the party history took 16 years to draft, including four extensive rewrites. In 2013, the General Office of the Communist Party Central Committee issued a secret directive prohibiting universities from permitting the discussion of seven themes—the “Seven Don’t Mentions.” To independently minded scholars, the most disturbing item on the list was the leadership’s mistakes.

While the Chinese authorities have never come close to permitting a serious investigation of either the Great Leap Forward or the subsequent Cultural Revolution, these and other aspects of the party’s past were not considered utterly taboo until recently, as long as the discussion did not lead to serious challenges to orthodox historical interpretations. According to the policies set down under current party leader Xi Jinping, talking in classrooms about Mao’s errors is now forbidden.

In much of the world there are or have been major efforts to confront uncomfortable truths about the past. This is true of Germany and South Africa. Latin American countries like Chile and Argentina have probed the histories of ugly conflicts between military juntas and Marxist revolutionaries. South Korea and Taiwan have addressed the complex legacies, including outright crimes, of dictators. Recently, the new South Korean government took the important step of dropping a history curriculum that offered a more positive interpretation of past military rulers.

The process of accounting for the crimes of earlier decades can raise a tangle of ethical and emotional challenges in any country. But resistance to a full examination of the past is especially bitter in societies where communism long prevailed. In China, Mao’s heirs still control the state, and the legitimacy of the system is built on veneration of the Great Helmsman. In Russia, the leadership praises the achievements of Stalin. In both countries, approving the acts of human monsters reinforces an overarching message that internal stability demands a rejection of liberal notions about individual freedom.

The communist system was responsible for four of the most destructive episodes of the 20th century: Stalin’s purges, the Great Leap Forward, the Cultural Revolution, and the Cambodian genocide. Add to this the persecutions inflicted on the people of Eastern Europe, the ongoing dystopian misery imposed by North Korea’s Kim dynasty, and many other abuses, and the population affected by communist atrocities swells even further.

While few people today admire totalitarian Marxism as a governing system, there is a reluctance to reject it with the same moral clarity as in assessments of Nazism. As long as Stalin and Mao, two of history’s worst mass murderers, escape similar opprobrium in their own countries, a reckoning with historical truth and an understanding of its lessons will be postponed.

Arch Puddington is a Distinguished Fellow for Democracy Studies at Freedom House. He previously worked as research director for the A. Philip Randolph Institute, as executive director for the League for Industrial Democracy, and as a bureau manager for Radio Free Europe-Radio Liberty.