Emotions are high and words are flying fast, when suddenly the head of the negotiation delegation gets up and leaves the room. There have been numerous tactical walk-outs during the past 24 hours of marathon negotiations to reach a peace agreement, but this time things are different. Just when the parties are close to signing, one of the delegations is told by their government to insist on an additional clause in the final document. The other party refuses to accept the change. The minutes tick by with frantic efforts by the mediator to find a last minute solution acceptable to all. However, all is in vain. The head of delegation feels it would be a bad deal for her constituency and she still distrusts the other side – so she walks out for good. Both parties blame the other side for the subsequent escalation of violence.

This situation stems from a two day non-stop negotiation simulation used in trainings to help negotiators and mediators prepare for real-world peace negotiations. After the role play, participants often voice frustration about the lack of progress towards reaching an agreement. But, as the emotions calm down, they also start to identify lessons about the conflict dynamics and the use (and misuse) of negotiation skills and strategies. Above all they also begin to reflect on their own personal strengths and weaknesses as negotiators. Questions of communication style, body language, dealing with emotions, and handling chaos are at the forefront of such reflections.

Role plays and simulations are used in numerous formats and styles in negotiation and mediation training. The idea of simulations is that participants take on a role and represent a particular individual: such as a member of a negotiation delegation of a government or an armed non-state actor. Based on the role instructions they have received, they try to negotiate an agreement with the other side, while at the same time being exposed to the difficulties of negotiations within their own delegation. Short role plays may take less than an hour, involve as few as two people and may aim to practice simple negotiation skills, e.g. how to shift from positions to interests. Longer role plays may take 1 to 2 days or even several weeks, and can involve up to 25 people – with plenary meetings, sub-committee sessions and back channel exchanges. The longer role plays allow participants to immerse themselves in the conflict and experience the unpredictable dynamics first-hand. Beyond learning basic skills, the longer simulations enable participants to internalize the skills, develop their strengths and reflect on their weaknesses.

The purpose of role plays is for participants to practice negotiation or mediation, rather than just learning about it intellectually and observing it from the outside. Rather than analyzing the conflict from an objective distance, participants gain an inside view of the process. Like riding a bike, the theory is simple, but if one wants to actually become an expert negotiator or mediator, one has to practice, practice and practice some more. The advantage of simulated negotiations and mediation is that one can test different approaches and styles in a safe environment. Input from instructors also helps participants discover aspects of their negotiation and mediation style they may not recognize on their own. Furthermore, there are indications that people remember very little of what they read or hear in a lecture, while if they use what they learn, retention increases up to 90%.

Pros and cons of simulations

Critics of role plays and simulations have argued that while participants have fun and get enthusiastic about negotiations, the actual learning is superficial, as the process is too far removed from reality. Another common criticism is that simulations lead to the stereotyping of actors in conflict, rather than a deeper understanding of the various players and dynamics. It is also said that emotional tensions between participants at times spill over into the real world, as participants find it difficult to shed the perspectives they adopted and the feelings they experienced during the simulation. Many of these criticisms, however, do not necessarily reflect on the approach per se, but rather point to the low quality of some role plays and simulations, particularly in how they are designed and run. Furthermore, most supporters of simulations do not argue that these modules are magic bullets that should replace other forms of learning. Well-designed role plays may miss their target if they are not well embedded in the overall training program and complemented with other forms of learning. 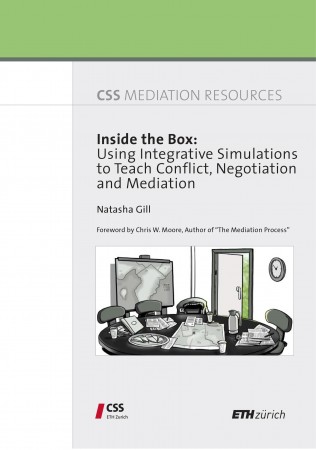 Simon J. A. Mason is a senior researcher and head of the Mediation Support Team at the Center for Security Studies (CSS).

“Mediation Perspectives” is a periodic blog entry provided by the CSS’ Mediation Support Team and occasional guest authors. Each entry is designed to highlight the utility of mediation approaches in dealing with violent political conflicts.