Peering into a Murky Crystal Ball; Where Will Africa be in 2030? 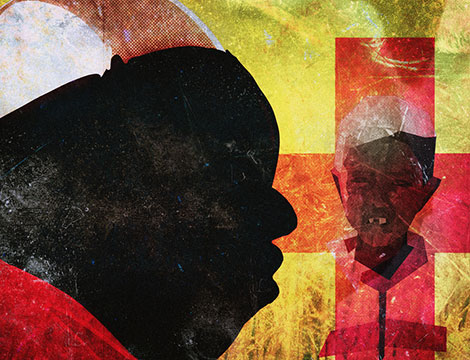 Courtesy of Surian Soosay/Flickr. CC BY 2.0

This article was originally published by the Institute for Security Studies (ISS) on 5 January 2017.

Africa will miss most of the internationally-agreed Sustainable Development Goals (SDGs) by the target date of 2030. But it might just reach ‘escape velocity’ enabling it to break out of its extreme poverty orbit by 2045 or 2050.

This is the sense of experts who participated in a seminar on Africa’s future at the Institute for Security Studies (ISS) in Pretoria recently.

‘Almost no Sustainable Development Goals will be met without truly revolutionary improvements in governance and the way services are delivered,’ said ISS chairperson Jakkie Cilliers, who also heads the institute’s African Futures and Innovation programme.  Even in an optimistic ‘Africa Rising’ scenario projected by the ISS, most African countries would not meet the 17 SDGs.

The principle SDG is to eliminate poverty. But extreme poverty (quantified as living on US$1.90 per person, per day or less) was unlikely to be eliminated by the 2030 SDG target date in any plausible scenario, Cilliers said.

Over 37% of Africans now live in extreme poverty.

In a baseline scenario – projecting current trends using the International Futures forecasting tool – that figure would drop to about 33% by 2030, the ISS projections indicate. But because of the phenomenal growth in Africa’s population in the meantime, the number of people living in absolute poverty would still rise over those 15 years by about 100 million people (from 440 to 540 million), another entire Ethiopia. By 2045, the percentage of Africans living in extreme poverty would drop to 24 in the baseline scenario.

Almost no SDGs will be met without revolutionary improvements in governance

Cilliers said Africa would need sustained economic growth of at least 7% year on year to make a significant dent in poverty and even then that would take several decades. That would be possible in the Africa Rising scenario which projects average annual growth of 7.1%. This scenario is premised on a significant improvement in governance, including a fourth wave of democracy, where presidential terms limits are observed in fact – rather than in the breach as is too often the case now – regular elections are held which are genuinely free and fair, and institutions are efficient and respected.

In this Africa Rising scenario governments create conditions for business to thrive, there is a growth in manufacturing, the formal sector expands, creating a larger tax base to finance government welfare, and there is a green revolution. Importantly, governments ensure growth is inclusive.

In the converse Politics of the Belly scenario, authoritarian government continues or gets worse, incumbent leaders continue to manipulate systems to remain in power and to fleece the public purse and to mobilise support on the basis of ethnicity and populist appeals.

In the economy, informal sectors balloon, services rather than manufacturing expand, subsistence farming continues at the same level and inequality increases.

Cilliers put considerable emphasis on the importance of the formal economy and particularly of manufacturing as an essential driver of development, saying no large economy had ever really taken off without it.

Over 37% of Africans now live in extreme poverty

And so in his optimistic Africa Rising scenario, the continent’s ubiquitous informal sector, drops from its current level of about 26% of total Gross Domestic Product (GDP) to about 17% by 2050 but only down to just over 20% in his gloomier Politics of the Belly scenario.

And Cilliers said all successful high growth countries in the world had grown their manufacturing sectors behind trade protection barriers. In his best scenario, Africa Rising, international trade policies would allow Africa to protect and grow its infant industries and businesses.

It seems rather unlikely that the world will do Africa any such favours, given the growing nationalistic trade sentiment of every country for itself.

Lt Col Peter Wright, an Africa expert and forecaster in the UK Ministry of Defence, took a more sanguine view of the continent’s long-term future. He predicted Africa would reach ‘escape velocity’ by 2045–2050 anyway, bursting out of its low-development orbit to start catching up with the world.

That would be largely due to structural changes in the global economy rather than to changes in Africa itself, he suggested.

Governance is most critical as a driver – or destroyer – of development

His optimism appeared to be grounded largely on a forecast that by then the rest of the world would be much more reliant on Africa’s mushrooming youth population as a source of cheap labour. (His implication was that by then other mass-manufacturing countries which now rely on cheap labour would have had to raise wages and so would have priced themselves out of that market.)

Wright also saw no major obstacle in the capital shortage which has historically been a drag on Africa’s economic development, noting that new industries, such as those in the information technology sector, were generally much less capital intensive than traditional industries.

The UK Defence Ministry forecasts Africa’s population doubling by 2050 and its economy quadrupling or quintupling, though Wright said he believed it would grow much larger.

The causal relationships of governance, economics, security and development appeared to be critical in understanding the differences in the perspectives presented at the seminar.

One way or another, Africa will probably remain hostage to its governments

‘Democracy is not the prevailing form of governance and progress has stalled,’ Cilliers noted, attributing this to factors such as the declining influence of Western countries, preoccupied with their own problems, such as immigration and declining economies, and the rising influence of authoritarian China.

His more optimistic scenario is based, though, on an assumption that democracy will revive in the long term.

By contrast Wright’s optimism appeared to be based on the causal relationship going the other way, with global, structural economic changes impacting Africa’s economies and then its politics – as well as its security and stability.

What the international community can do to help Africa take the high road, is of course the perennial question.

It could certainly help by allowing Africa to erect trade barriers to protect fledgling industries, as Cilliers suggested, though that seems unlikely.

Zachary Donnenfeld, a researcher in the ISS African Futures and Innovation programme, took a development-first approach. He lamented that donor countries are targeting their money toward promoting democracy and inclusivity, while neglecting more fundamental aspects of human development. For instance, providing universal access to clean water and sanitation would cost US$120 billion but could increase overall GDP in Africa by more than US$500 billion a year by 2030, he said, with other beneficial knock-on effects such as lower infant mortality and a reduction in the prevalence of communicable diseases.

Crystal-ball gazing is necessarily an inexact science and one of its hazards is fathoming the direction of causal relationships. But experience and intuition suggest governance is key. Even if the world does decide to pump US$120 billion into water and sanitation, it will require accountable governments to ensure that money is used for the intended purpose. And even new industries can only thrive in an orderly environment.

So, one way or another, Africa will probably remain hostage to its governments. If Africa is to rise, they must at last rise to the occasion.

Peter Fabricius is a foreign affairs journalists and a consultant for the Institute for Security Studies (ISS).

3 Responses to “Peering into a Murky Crystal Ball; Where Will Africa be in 2030?”