The Politics of Video Games 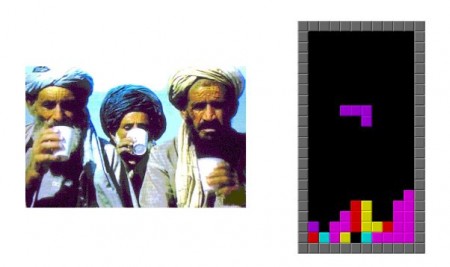 Some are saying that Afghanistan is “too fresh” to allow people to play the role of a Taliban, and after all, Electronic Arts, the creator of the game, is part of the “western camp” and should support the “western cause” in its video games. In other words, they should have created a new America’s Army, the official video game of the US Army, with a real-life sign-up process built into the game’s menu.

The US Army, of course, is not the only entity that uses video games to promote itself.

Some political organization, like Hamas, have produced their own video game where you have to make your way through refugee camps and shoot at Israeli soldiers.

But video games are also not new to the world of politics and conflict.

During the Cold War the games industry became highly politicized. Pac-Man, created in (capitalist) Japan and widely adopted in the US, has the player in the role of a yellow monster that has to eat as many  fruits as possible while being chased by ghosts, whose ‘boss’ is red.

In response, the Soviets created and launched Tetris, the puzzle video game in which you have to create lines and blocks with the elements you get. This game symbolizes solidarity and forces you to create a ‘collective’ in order to win the game.

But should government ban video games that do not represent their political views? I think it is a mistake to do so and will only encourage more and more gamers to find a way to gain access to such games illegally (and gamers are generally good at it.)

And in a democracy, we should be free to choose between the good and the bad. And if some people fancy playing the role of a Taliban in a video game, so be it. I really don’t see their next move being moving to a training camp in the mountains of Pakistan.

Just on cable TV you can already watch plenty of “jihadist” material, and Medal of Honor 8 is far from being a “jihadist” video game.

To those of you who want it banned: video games need bad guys. Even if in this case, unlike in WWII, the bad guys seem to be winning..

One Response to “The Politics of Video Games”