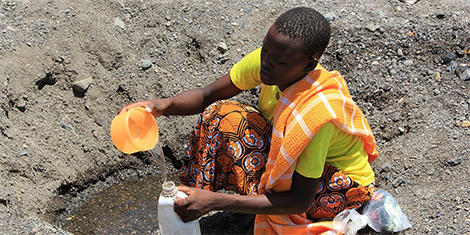 Image courtesy of Marisol Grandon/Department for International Development/Flickr. (CC BY 2.0)

Climate change poses multiple risks with the potential to trigger tensions within and across nation-states. In some places flooding and the rise of sea levels will threaten homes and essential infrastructure; shrinking access to water for irrigation and consumption will undermine rural livelihoods, especially in semi-arid areas; and warming, drought, flooding, and changes in rain patterns will disrupt food systems and exacerbate food insecurity. The severity of these risks rises with higher global temperatures. In other words, risks are directly related to the present scale of mitigation action. So what can we expect in the years ahead? Are climate wars on the horizon, or do they largely lie in the realm of cli-fi fantasy?

History can be a guide to the future, so what do past experiences tell us about the relationship between environmental change and conflict? In the case of water, we see a mismatch between assumptions and evidence. Common wisdom holds that states—and perhaps individuals—will resort to conflict to secure their own access to scarce resources, like freshwater. Research by environmental scientist Peter Gleick in the early 1990s was the first to back up this assumption with historical analysis. He predicted that growth in population and demand, combined with uncertain supply, would increase the likelihood of international military action to secure supplies.

The Middle East, as the world’s most water scarce region, provides numerous cases—both historic and contemporary—to support the hypothesis. Fourteen centuries ago, the King of Assyria reportedly seized water wells to weaken Arabia and gain strategic advantage. More recently, the Jordan River basin has been a hot spot. Animosities in the region have run high since Israel was formed in 1948. But it was the Arab countries’ attempt to divert headwaters of the Jordan River away from Israel in the 1960s that pushed them towards violent conflict. In 1967, shortly before war broke out, the Israeli Prime Minister warned that water is essential for the country’s survival and they would use “all means necessary” to secure water flows. Over six days, Israel then bombed a Jordanian dam on an important tributary to the Jordan River and seized large swathes of upstream territory; and in the process expanded its access to freshwater.

But some scholars remained skeptical that examples from the Middle East reflected a more general connection between resource scarcity and war. Studies out of Norway showed that most of the conflicts Gleick identified were only verbal conflicts, threats of violence, or water-related violence in already-occurring wars. In other words, they were not cases of water scarcity triggering armed conflict. Furthermore, in most cases, water was only an instrument of war or a strategic target, not the objective of fighting in the first place.

Further research at the University of Oregon categorized 2,000 international interactions over war and found that cooperative actions were far more prominent than conflictual ones. Cooperative water bodies have even survived conflict and war between water-sharing countries in various parts of Asia (such as during the Vietnam War). It turns out that violent conflict specifically over water is a fairly rare and isolated phenomenon. Democratic regimes, international trade relations, and membership of cooperative international institutions all reduce the likelihood of conflict. This “democratic peace thesis” should not prompt a Pollyanna vision of the future, but it should tame fears about the likelihood of climate change driving conflict.

Of course, we cannot know that the future will reflect the past: irrespective of whether scarcity was a driver of historical conflicts it may well be a driver of future ones. Water is non-substitutable in agriculture, human wellbeing, and some manufacturing and electricity generation. The world population is estimated to increase by 83 million people per year until 2100, when it will peak at roughly 11 billion. So as long as demands increase, water will become ever scarcer and create conditions we haven’t seen in the past. We also cannot rule out the potential for sub-national conflict, especially in areas where ethnic and regional tensions are already high (such as along the Nile and Indus rivers), and where local populations compete with multinational companies for dwindling resources. Mining companies are profligate water users in arid and semi-arid countries, and this is likely to provoke further tensions in the years ahead.

In Peru, melting glaciers and warming temperatures are reducing the water available for agriculture in the Andean highlands. This provokes clashes with mining companies, which have privileged access to water and a reputation for contaminating common water supplies. This problem is not unique to Peru. As climate change threatens water supply and quality, we will likely see more intense debates about how to use this resource, which in turn places greater pressure on states’ capacity to peacefully and fairly manage competing demands. At the international level, multilateral institutions can promote cooperation and stifle tensions, but these institutions are designed to manage relations among states, not among sub-national groups, or among communities and firms.

Events in Syria have ignited fears about climate change driving civil war. In 2015, Time magazine presented the “surge of migrants” crossing into Europe as foretelling a future crisis of climate refugees. With everyone from Barack Obama to Prince Charles repeating the claim that unprecedented severe drought in Syria triggered civil tension and ultimately civil war, it quickly became accepted wisdom. But here too we should avoid hasty assumptions, as researchers from the United Kingdom and Germany concluded that the “drought migration-civil war thesis” rests on weak evidence.

Of course, whether or not migration is fueled by conflict or other climate-related destitution, human displacement is now inevitable in the years ahead. The scale of displacement will depend on the mitigation and adaptation actions put in place now. The attention of the international policy community should be directed to this question of “human security,” irrespective of the risk of climate conflicts in the years ahead.