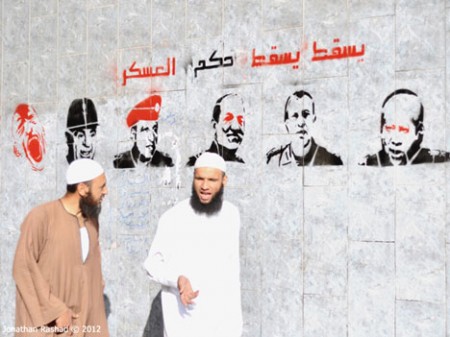 Just a few months ago, no one would have imagined that at the beginning of April a delegation of Egyptian Muslim Brothers would visit Washington — let alone be warmly welcomed inside the White House and the State Department. Even more surprising, it now appears that the Egyptian Salafis — the Muslim Brotherhood’s more conservative Islamist counterparts in Parliament — have grown jealous of the Brotherhood’s warm reception in America’s capital. A credible source close to the Salafis confirmed that they, too, now desire a visit to Washington.

The main Salafi political party, al-Nour, captured approximately 24 percent of the Parliament’s seats in last winter’s election. An inaugural Salafi visit to the U.S. is likely to occur as part of a larger delegation of Egyptian parliamentarians that includes representatives of all political parties. A trip under these circumstances would be acceptable to both the Salafis and the Obama administration, and could be justified as a step towards bridging the substantial cultural and political gap between the two sides.

The Nour party’s endorsement on Saturday of moderate Islamist candidate Abdel Moneim Aboul Fotouh for president sends a clear message about the party’s pragmatic and flexible approach, since Abdel-Fotouh is supported by both moderates and liberals.

Nevertheless, the Salafis will face a dilemma when they visit Washington. For many in America and Europe, the Brotherhood has come to represent the face of moderate political Islam in Egypt. By contrast, it remains to be seen how the Salafis will present themselves to the Western world. Will they portray their movement as a replacement for violent political groups, as an alternative to al-Qaeda, or as the embodiment of conservative and fundamental Islam?

The Salafis will no doubt remind their Washington interlocutors that they, too, listened to President Obama at Cairo University in June 2009, where he pledged to respect the desires and choices of Egyptians, saying: “The United States will welcome all governments elected democratically and in a peaceful manner.”

While the Salafis represent the most conservative of the religious right in Egyptian politics, they also represent about a quarter of the Egyptian population, and therefore cannot be ignored or marginalized. The United States recognizes and works with many conservative governments around the world, some of which are among Washington’s most important allies. The U.S. also has its own right-wing religious movement, personified in the candidacy of Rick Santorum, which has exerted considerable political power in the past few years and is expected to influence the upcoming 2012 elections.

To be sure, some of the Salafis’ current leadership previously rejected the validity of the democratic process. For example, Sheikh Yasser Burhami once explained: “We want democracy, but one constrained by God’s laws. Ruling without God’s laws is infidelity.” Prominent Sheikhs who cautioned their followers against political participation in the past are now calling upon their followers to use democracy as a mechanism through which to implement Sharia’ law.

If and when the Salafis come to Washington, they will be on the hook to explain their conservative positions on hot-button political issues like women’s and minority rights. Members of Congress will grill them on the repeated proclamations by Salafi sheikhs that women be confined to the home and denied the right to work. They will want to know whether the Salafis will seek to impose Islamic dress standards on all Egyptian women. The Salafis will be hard-pressed to come up with a satisfactory response to questions regarding the treatment of Egypt’s Coptic Christian minority, whom they believe should be barred from the presidency and from holding elected political office. Their leadership’s refusal to endorse political pluralism will be the Salafis’ greatest liability in Washington. Several months after its election to parliament, the al-Nour party still lacks a clear and coherent response to questions about how it will deal with the political and human rights and responsibilities of citizens, the role of religion in public life, and the definition of Egyptian citizenship. The Salafis can also expect congressmen to seek clarification on their exact position regarding the peace treaty with Israel.

Moreover, their persistent demand that the U.S. release Sheikh Omar Abdel Rahman won’t win the Salafis friends in Washington, either. The Sheikh is currently serving a life sentence in a Colorado prison for his role in the 1993 World Trade Center Attacks, an act of terrorism that killed several American civilians. His release is completely untenable to the U.S., and the Salafis should drop any expectation that such a demand would be considered.

The Salafis may find a more receptive audience in Washington if their traveling group is led by representatives of the al-Nour Party, the most realistic and relatively moderate of the Salafi parties, especially when it comes to issues such as women’s and minority rights and Sharia’ law.

This scenario would be their best chance at laying the foundation for a working relationship with the U.S. Establishing a direct dialogue serves the interests of the Salafis as well as the Americans, and holds the potential to raise Washington’s stature in the Middle East. If it does manage to create ties with the Salafis, the U.S. can then rightfully claim that it works with all elements of the Egyptian polity, including those with which it does not share a common political belief. This would be a welcome development for U.S.-Egyptian relations and for America’s standing in the region.

This Opinion first appeared in the Huffington Post on May 11, 2012 and was crossposted with ISN partner Middle East Institute.

For additional reading on this topic please see:
The Salafis are Coming – But Where are They Going?
Evil Develops in the South
The Muslim Brotherhood in Egypt