What has become of Turkey’s so-called ‘Zero Problems’ foreign policy? What should we think about the country’s evolving role as a regional actor?  And when we ask the latter question, which region are we actually talking about?   These questions were the focus of a recent discussion, sponsored by the Center for Security Studies, with Dr. Şaban Kardaş, who is an Associate Professor in the Department of International Relations at TOBB University of Economics and Technology in Ankara.

Dr. Kardaş argued that in order to answer these questions properly, we must understand the notion of Turkey as a ‘central’ country or power.  In other words, we must recognize that Turkey’s geography and history seem to demand that Ankara play a leading role in its region. What Dr. Kardaş meant by a ‘region’, however, turned out to be quite expansive indeed.

The notion of Turkey as a ‘central’ country originates in the writings of Turkish Prime Minister Ahmed Davutoglu, who was a professor of International Relations in Istanbul before he entered politics.    Davutoglu believes that Turkey is not an ordinary nation-state that can be easily located in one region or another. Instead, it lies in many regions (or ‘basins’) simultaneously.  Because it controls the Bosporus and is the ‘heir’ to the Ottoman Empire, Turkey is “the epicenter of the Balkans, the Middle East and the Caucasus, the center of Eurasia in general and is in the middle of the Rimland belt cutting across the Mediterranean to the Pacific.” (See Davutoglu’s 2001 book, Strategic Depth.)

This language of ‘Rimlands’ and ‘basins’ echoes the ‘geopolitical’ thought of Spykman, Mackinder, Haushofer and others that became associated with Western imperialism in the late 19th and early 20th centuries.  Dr. Kardaş admitted that Davutoglu, a fluent German speaker, seems to have been influenced by Haushofer in particular. At any rate, a noticeable feature of the ‘central country’ idea (compared to others that have been used to describe Turkey) is that being one is an advantage. If ‘proactive’ policies are pursued, central countries enjoy additional room for maneuver vis-à-vis their neighbors. By describing Turkey in this way, Davutoglu is arguing that the country’s unique history and exceptional geography demand an active foreign policy.

‘Activism’ has been a theme in analysing Turkish foreign policy at least since President Turgut Ozal’s ‘energetic’ support for the First Iraq War in 1991.  But after the landslide victory of the socially conservative Justice and Development Party (AKP) (for whom Davutoglu became an advisor) in 2002, and especially after Recep Erdogan won a second term as Prime Minister in 2007, Turkey’s activism abroad began to arouse anxiety in the West. According to one analyst, the implications of Davutoglu’s foreign policy doctrine include: courting alliances with Iran, Russia, China and India; 2) seeking spheres of influence in countries that were once part of the Ottoman Empire, especially Syria and Iraq; and 3) pursuing a leadership role in the Muslim world as whole – ‘from Malaysia to Morocco and Somalia to Central Asia.’

As intriguing as this model of Turkey’s self-image and intentions may be, Dr. Kardaş  characterized Turkey’s actual motives and behavior somewhat differently.  The country’s rising ambitions, he argued, are driven by the (im)balance of its material capabilities relative to those of its neighbors.  Compared to 23 nearby countries, for example, Turkey boasts the second largest economy (behind Russia) and the fourth-largest population (behind Russia, Egypt and Iran).  Only Russia and Saudi Arabia spend more on the military, and only the former’s military capabilities are clearly superior.  In material terms, this makes Turkey weaker than ‘global’ powers such as the United States or even Russia but stronger than most of its neighbors. According to Kardaş, this ‘middle’ position makes Turkey a classic regional power.

As a regional power, Dr. Kardaş’ argued that what Ankara really wants  is to lead a ‘normal’ – i.e., primarily economic – process of regional integration.  In 2011, for example, Erdogan proposed to unite Turkey, Iran, Syria and Iraq in a borderless common market known as the ‘Muslim Union’ or ‘Shamgen’ (a combination of Europe’s Schengen zone with al-Sham, a historical name for the Greater Levant).  In Kardaş’ view, initiatives such as these must be given more weight than Davutoglu’s academic writings or personal musings when accounting for Turkey’s intentions.  In other words, whenever Erdogan or Davutoglu mention cultural and historical ties between Turkey and its neighbors, their comments should be interpreted as an effort to lead an economic project rather than to cultivate spheres of interest or even ‘redesign borders.’

Having made this point, Dr. Kardaş then went on to stress the shortcomings of structural explanations for Turkey’s external behavior.  Such approaches, after all, usually provide little guidance about how states should be grouped into regions.  Indeed, do Turkey’s material capabilities place it on the periphery of Europe, or is it competing with Iran, Egypt and Israel for influence in the Middle East?  Against which powers should its capabilities be measured and compared?  In response to these questions, Kardaş provided the following answer: regional powers are those that play leadership and management roles with respect to their neighbors, and represent them on the global stage.  Based on this characterization, Turkey is neither in Europe nor the Middle East per se but part of a distinct space that comprises the Balkans, the Black Sea littoral, the Middle East and the Caucasus regions.

But how is Turkey leading, managing and representing this large area?  In the following table, Dr. Kardaş outlines the approach: 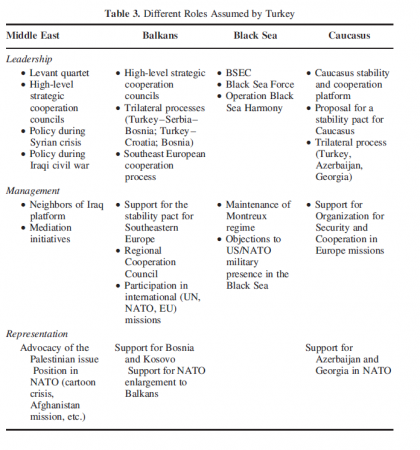 Strikingly, this view of Turkey’s regional neighborhood resembles Davutoglu’s notion of Turkey as a ‘central country’.  It also challenges an established method of delimiting regions in security studies.  In Buzan and Waever’s Regional Security Complex (RSC) theory, Turkey (like the classical example of Afghanistan) fits the description of an ‘insulator’ state– one that remains weak because it is exposed to pressures from multiple regions and lacks the power to unite them into one.  The problem with this theory, Kardaş argued, is that it tends to treat regions as mutually exclusive and assumes that states can only exist in one region or another.    Buzan and Waever, in short, favor theoretical parsimony over empirical accuracy.  As a result, the category of ‘insulator’ cannot adequately explain Turkey’s strategic behavior.   Echoing Davutoglu, Kardaş believes that there is no reason a state cannot be in many regions at once.

How, then, is Turkey’s recent ‘activism’ to be explained?   While Ankara was once famous for its policy of ‘zero problems with its neighbors’, many have suggested that this policy has fallen by the wayside. Kardaş, however, argued that this view is based on a misunderstanding.  ‘Zero problems,’ he reminded us, was only ever one aspect of the ‘central country’ concept.  As such, it may have ceded priority to other elements of that concept — such as ‘rhythmic diplomacy’, or ‘balancing freedom and security’ – but it has not been abandoned altogether .  Instead, Turkey is merely adjusting to the realities of the Arab Spring, which he characterized as a ‘learning experience’ for the country’s leadership.

According to Kardaş, the Arab Spring revealed the gap between Turkey’s vision of regional integration and its ability to bring that vision about.  Because of the Arab Spring, Turkey now has a greater appreciation for the importance of hard power.  It also understands that its region is deeply penetrated by global powers, especially Russia and the United States. These realizations explain why Turkey places less emphasis on ‘zero problems’ and is now taking sides in regional disputes, i.e.: 1) negotiating with the Kurdish Worker’s Party (PKK), 2) cautiously supporting the Kurds and elements of the opposition in Syria, and 3) taking a ‘sophisticated’ position towards the Islamic State, for which it has drawn criticism from Washington.  What this last criticism fails to understand, Kardaş concluded, is that Turkey needs to pursue a coherent, long-term strategy in its regional neighborhood – i.e., one that can deal with the Assads of the region as well as groups such as the so-called Islamic State.