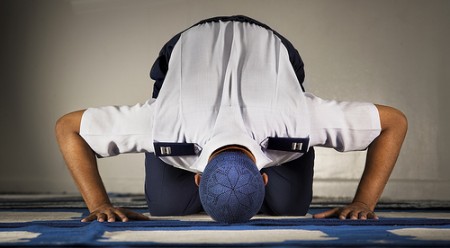 Chaplain (Capt.) Sharior Rahman holds the sajjud position during salah in preyer hall of the Defense Language Institute Student Center. The center sees as a many as 550 people in the prayer hall on Fridays. The carpets guide the people toward, “the first house of worship” in Mecca, Saudia Arabia. The sajjud position is the considered by followers to be the most humbling part of the prayer. This is one of four positions that are repeated at least 34 times over the course of 5 prayer times each day. The Sjjud has both mandatory and personal preyers, on this day he had a prayer “to find humility amongst mankind” to remind us of how human we are. Chaplain Rahman is assigned to the Technical Training Branch Chapel serving Defense Language Institute, Army Echo Company, and the 345th Training Squadron at Lackland Air Force Base, TX on Sept 10, 2009. (U.S. Air Force photo/Lance Cheung)