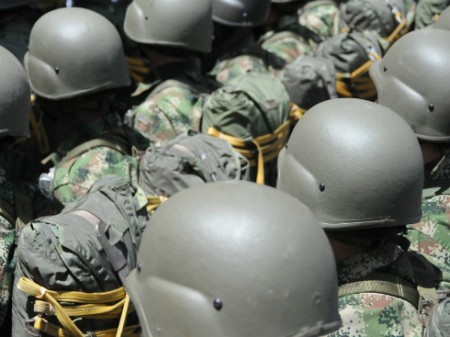 In addition to their love for telenovelas, as well as their cuisine and religion borne out of a shared Spanish heritage, Colombia and the Philippines now have one more thing in common. This [month], both countries took another step toward peace with their respective armed groups, which could lead to the end of internal conflicts that are among the oldest in the world. On October 15, the Philippines entered into a peace accord with the rebel Moro Islamic Liberation Front (MILF). Two days later, Colombia’s government began peace talks in Oslo with the Marxist Revolutionary Armed Forces of Colombia (FARC). Each of these presents a unique opportunity for civil society to sustain peace by fostering trust and accountability over issues such as land rights, delivery of social services, political participation at the local and national level, and tolerance for other people’s beliefs.

Civil society organizations from both countries have worked together to understand the pivotal role of citizens in peace-building operations. In 2010, a Philippine delegation visited Colombia on a peace practitioners’ exchange program to share their most successful practices. Since 2009, international organizations are helping women adopt their important role in both the Philippine and Colombian peace processes, and both countries have exchanged visits to build professional and political networks. This type of involvement by NGOs and the interaction between the two countries are critical aspects for the peace process. These two countries, facing similar challenges, are working together and sharing innovations. Their NGOs played crucial roles in creating an environment that allowed these steps toward peace to take place.

Brokered by the Prime Minister of Malaysia, Najib Razak, Philippine President Benigno S. Aquino III signed a treaty at the Malacañan Palace with Al Haj Murad Ebrahim, chairman of MILF, whose 11,000-strong military pledged to lay down its weapons. Civil society groups, foreign states, and international non-governmental organizations assisted in the peace process by providing mediation support to the Malaysian facilitator, and sustained a dialogue process involving regional civil society networks related to these peace talks. It also provided training courses on the role of Muslim women to halt the bloodbath in the Philippines’ Mindanao region by fostering civil-military dialogue and understanding victims’ rights.

For the conflict in Colombia, FARC rank and file members including Iván Márquez and Dutch-born guerilla member Tanja Nijmeijer arrived in Havana en route to join the rest of the negotiating party in Oslo on October 17, including President Juan Manuel Santos and government officials. After the gathering in Oslo, the Colombian government and FARC will hold a second round of talks in Havana. Analysts are optimistic that a deal can be struck. Several civil society groups and NGOs, like Fundación Ideas para La Paz, are providing policy ideas to governmental bodies to guarantee the success of ongoing peace-building operations head on, and they have encouraged future cooperation of the private sector to generate training and employment to demobilized guerrilleros.

In the Philippines, MILF—the “M” stands for Moro, which means “moor” in Spanish, a term referring to Muslims—began a Muslim separatist rebellion from the Christian ruling country in the 1970s. The Philippines has dealt with several guerrilla factions like the Moro National Liberation Front (MNLF), the communism-inspired New People’s Army, and Abu Sayyaf—the most radical of the Islamist groups that, like Colombia’s FARC, relies upon kidnapping for ransom. In the case of Colombia, the last six administrations sat down with a swath of armed groups like the Popular Liberation Army, the 19th of April Movement (M-19), Quintín Lame, and the National Liberation Army. The Colombia and Philippine peace-building operations faltered, however, because the armed rebels accused their respective negotiating counterparts of not complying with ceasefire truce. Case in point: In 2007, the Islamic group claimed that the army killed four of its members including a commander. In the case of FARC, they have claimed that not only had the government failed to promise their participation in Colombian politics in the 80s’, but that Colombian officials allegedly killed a diplomatic emissary in March 1992, during the Tlaxcala, Mexico peace accords. In both cases, the role of civil society was practically unknown, but they started to gain more notoriety overtime, with the creation of Colombia’s Ideas Para La Paz in 1999, for example. Furthermore, the aforementioned Colombian-Philippine peace-building project emerged two years ago, and has collected ideas from both sides to create mechanisms to maintain peace.

From their inceptions, both FARC and MILF have pursued political aims, and have occasionally sought peace agreements that never bore fruit. Muslim rebel leader Nur Misuari signed a peace accord in 1976—dubbed the Tripoli Agreement—to grant autonomy over predominantly Muslim areas. Then, in 1996, another treaty was signed to set up the Autonomous Region in Muslim Mindanao (ARMM), comprised of the provinces of Maguindanao, Lanao del Sur, and the islands of Sulu, Tawi-Tawi, and Basilan. FARC presented a similar pattern in establishing its own territories: In the 1960s FARC’s leader, Manuel Marulanda Velez “Tirofijo,” established the Republic of Marquetalia, a small portion of land in the Tolima department. This led to a military raid in 1962, and, though it curbed the foundation of a separatist state, it did not halt guerrilla operations.

The Colombian and Philippine conflicts have proved that territorial assignments to these armed groups do not constitute warrants of peace. When the ARMM was established in the Philippines, MNLF founder Nur Misuari was installed as the new regional leader. But in November 2001, he led a failed violent uprising that landed him in jail. In February 2005, supporters of Misuari launched a series of attacks on army troops in Jolo, one of the Sulu Islands. In August 2007, there was another massive ambush in the Sulu Islands against the military, which resulted in 60 casualties. In the case of Colombia, FARC attempted to acquire a stronghold in the Caguán demilitarized zone in southern Colombia in 1999. The Andrés Pastrana administration (1998-2002) cleared an area almost the size of Switzerland (42,000 square kilometers) in a gesture of goodwill to carry out a definitive peace accord. However, a peace agreement was never reached, and Pastrana ordered the immediate military occupation of Caguán that only deepened the internal conflict.

Despite the historical outcomes of earmarking territories, the Philippine government has pledged to create a new territory for MILF called Bangsamoro, which will replace the failed ARMM and have a degree of autonomy but will not be considered an independent country. In contrast, the Colombian government has not offered the possibility of allocating a territory for FARC; rather, they have instructed FARC to lay down its arms, demobilize, and integrate itself into the civil society. It is said that FARC will request an active participation in decision-making processes, particularly in agrarian and socioeconomic matters. It seems that the Colombian peace process has the approval of all branches of power, since there has been no stated opposition to carrying it out from the legislative or judicial branches. Conversely, the peace agreement in the Philippines is likely to face legal and constitutional challenges in the Supreme Court, as seen in a struck-down 2008 agreement between MILF and the government. A finalized peace agreement must go through the two houses of Congress, be signed by the president, and enacted in a referendum, in order to take effect. Humberto de la Calle, the Colombian government delegation chief, did not disclose on October 18 whether the population would go to the polls to enact or disapprove the peace process in a referendum

Paramount to the sustainability of peace in both countries is the civil society’s participation in teaching citizens about the benefits of having a peace accord in the long run, especially in the midst of sheer skepticism. A recent poll by BBC reports that 77 percent of Colombians support the peace talks, yet only 54 percent say they’re optimistic about its outcome; 78 percent oppose any sort of amnesty to the FARC leaders, and 72 percent reject their political participation. Filipinos strongly support the ongoing peace process, though some of them have expressed concerns, particularly non-Muslim inhabitants in Bangsamoro who claim they won’t be able to practice their religion freely. Likewise, Bangsamoro residents are worried that MILF has a hidden agenda of making a different country, thus deepening impoverishment.

If the efforts to intertwine the role of NGOs, academia, media, faith-based groups, local communities and their leaders, and the military to create concrete programs on peace-building, such as reconciliation among victims and perpetrators, economic development, and respect of different religious beliefs, is successful, Colombia and the Philippines will illustrate that peace-building operations cannot be completed without civil society organizations. These operations need to incorporate the efforts of civil society’s peace-building mechanisms that will finally make both government and armed rebels understand that military threats are by no means the quintessential conduit to ultimately achieve peace.

Robert Valencia is a Research Fellow at the Council on Hemispheric Affairs and is a contributing writer for Global Voices. This article was originally published by the World Policy Institute.