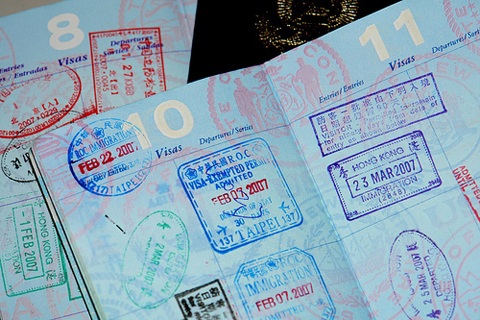 Travelling the world - but only with states

This week the ISN will examine the role of nationalism in an evolving and dynamic international system. We will also consider whether multiculturalism is a necessary and appropriate response to some of the more retrograde and unsettling aspects of nationalism. From the outset, however, it is important to mention that the social science literature on nationalism often emphasizes 1) the lack of a comprehensive definition for the term, or 2) that there is a multiplicity of nationalisms. Indeed, these nationalisms often get defined with catch-all terms such as New Nationalism, Liberal Nationalism, Small Nationalism and so on. This multiplicity, in turn, confirms that the very concept of the nation has developed across the course of history and refers to more than just to a group of people born in the same place.

Again, to chart our understanding of nationalism today, we begin by quickly outlining Ernst Renan’s conception of the nation-state, followed by a look at how some analysts are trying to transform this traditional view of it in order to respond more effectively to the stresses of globalization. (Yes, nationalism provides states with a cohesive identity, but often by playing upon the insecurity of societies to achieve desired outcomes.) Finally, we will quickly look at multiculturalism and see whether it offers an approach to addressing global challenges that is more user-friendly than nationalism. END_OF_DOCUMENT_TOKEN_TO_BE_REPLACED

The Future of Nationalism and the State – Introduction 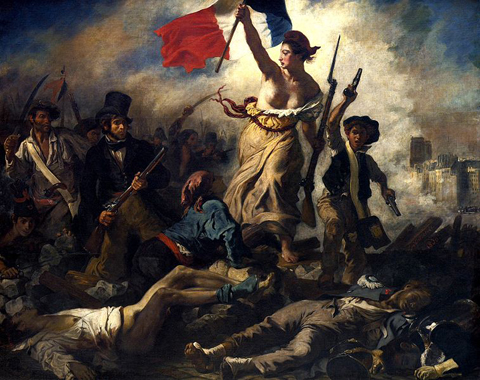 Thus far in our Editorial Plan we have posited a simple overarching theme – the international system is indeed undergoing irrevocable and tectonic changes. To illustrate this claim, we have done three things thus far. First, we asked ourselves what the trajectory of these changes might look like. We looked, in other words, at the challenges and opportunities afforded by international relations-centered future forecasting. Second, we built on this exercise in ‘futurology’ to look at the traditional geopolitical dimensions of international relations today and tomorrow. Last, we then looked at geopolitics’ theoretical opposite – i.e., we looked at the arguments presented by those who would have us pursue global interdependence and effective multilateralism rather than hew to traditional geopolitical lines.

This week and then starting again on January 2 (yes, we will feature new material during Christmas week, but it won’t be part of the Editorial Plan), we will ‘sandwich’ our previous analysis of global interdependence between our initial discussion of geopolitics and our current discussion of nationalism and the state. Over the years we have tended to hyphenate these two categories, but we know better now. Nationalism is a broader concept and carries with it considerable socio-cultural ‘baggage.’ We therefore plan to look at it first this week and pit it against a rival concept that has equally vociferous advocates – multiculturalism. Then, after the Christmas break, we will resume our discussion by looking at the state of the state in international relations. By twining our analyses of nationalism and the state in this way, we will have addressed the geopolitics of international relations, its potential for interdependence and multilateral cooperation, and its still-dominant Westphalian dynamics. As usual, we wish you happy reading.

A Chinese one Yuan bill, courtesy of upton/flickr

This weekend, the annual meetings of the International Monetary Fund (IMF) and the World Bank Group take place with a focus on the world economic outlook, poverty eradication, economic development and aid effectiveness. The meetings are convened in a situation of escalating disputes about the sustainability of the international monetary system and fears of a coming currency devaluation war.

Dominique Strauss-Kahn, the director of the IMF, warns that the willingness to use currencies as a political weapon is growing in a short-sighted attempt to boost a nation’s economy, better known as “beggar thy neighbor” policy. Primarily China with its policy of keeping the Yuan artificially cheap vis-à-vis the dollar and the euro is seen as the main trigger of the current situation. But also the US policy of keeping interest rates at a long-time low adds to long-standing imbalances of the international monetary system.

It will be interesting to see whether the IMF and the World Bank, both cornerstones of the Bretton Woods system and as such deeply interwoven with the shaken monetary system, can facilitate the adaption to the changing realities not only in the realm of monetary economics.

Explore our content holdings on the IMF and the World Bank Group, today’s keywords in focus. Some highlights include: 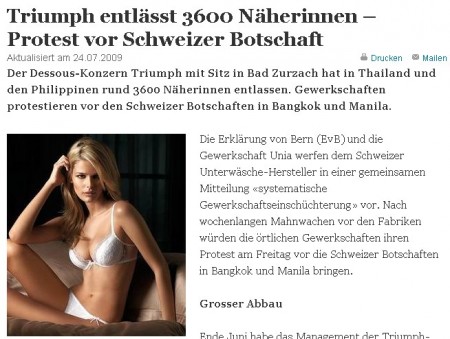 On Friday 24 July, lingerie maker Triumph confirmed that it will lay off 3,700 workers in Thailand and the Philippines. Triumph International is headquartered in Switzerland and employs 40,000 people worldwide.

Firing staff is not remarkable, you may think, especially during a global economic downturn. However, if it was not for the Swiss labor union Unia, the Triumph story would probably not have made news at all.

Unia, together with the NGO Berne Declaration (BD), helped to organize protests in Bangkok and Manila. Hundreds of people demonstrated in front of the Swiss embassies and voiced complaints against Triumph.

Decades after companies started to spread their activities across national borders, trade unions have learned the business of globalization. Unions have fought globalization long enough. It seems that they are now employing its forces.