Grappling with the Fait Accompli: A Classical Tactic in the Modern Strategic Landscape 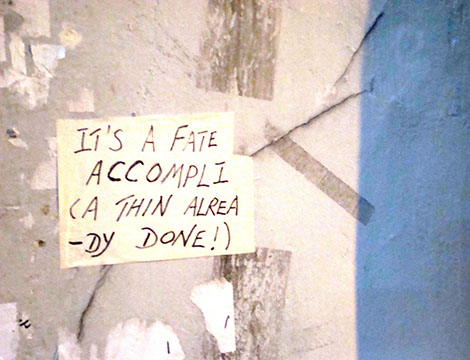 This article was originally published by War on the Rocks on 31 May 2016.

Good scholarship doesn’t need to fit within a 2×2 matrix, but it sure helps make sense of things when it does. It’s in this spirit of conceptual clarity that I developed the diagram below depicting variations in the fait accompli, an age-old but underappreciated tactic of the disgruntled and strategically minded. Rather than the naked use of force or threat-making alone—situations whose logics are straightforward even if the best responses aren’t—the fait accompli is a move that pursues an advantage by making it difficult for a competitor to retaliate or counter.

Variations of the Fait Accompli Table, courtesy Van Jackson/War on the Rocks

This 2×2 diagram is part of a lecture I give at the Asia-Pacific Center for Security Studies on revisionist tactics short of war — what many now call “gray zone” conflicts. Although most security studies scholars and analysts understand broadly what a fait accompli is — literally an “accomplished fact” — the tactic itself has rarely been an object of analysis (two recent rare exceptions are discussed more below). This is a serious oversight, because in the so-called “gray zone” of conflict, the fait accompli is a common means by which states pursue revisionist agendas.