This article was originally published by Political Violence @ a Glance on 24 January 2017.

In September, US Senator Barbara Boxer introduced legislation calling for the active recruitment of women into global military and police forces because, as she notes, “when women are deployed… there are fewer allegations of sexual abuse and exploitation.” This follows a string of proposals from government officials and international organizations – as well as findings from academics – suggesting that integrating women into armed groups mitigates conflict-related sexual violence. For example, United Nations Security Council Resolution 1325 explicitly calls for gender mainstreaming in armed institutions as a solution for sexual abuse and violence against women. Some academic research supports this idea, concluding that groups may commit fewer rapes when they have high proportions of female combatants.

This argument’s core logic, however, makes a series of flawed assumptions about gender and sexual violence. First, and perhaps most significantly, it assumes that female combatants are innately less violent than their male counterparts – it suggests women’s passivity should tame otherwise violent groups. Yet women’s wartime brutality is well documented and, in many cases, female combatants also commit rape. Indeed, sexual violence persists in many groups despite female integration: high rates of ‘blue on blue’ assault in the US military and testimony from female rebels in Nepal, Colombia, and other conflicts illustrate that many female-inclusive groups abuse their own cadre in addition to civilians.

Second, calls to integrate women as a mechanism for preventing abuse ignore the many exclusively-male groups – including those in Afghanistan, Chad, India, China, Azerbaijan, Croatia, Pakistan, and Morocco – who commit little or no rape whatsoever. These cases provide an important counterfactual, demonstrating that integrating women is not necessary to reduce rates of sexual violence.

Third, integrating female combatants often does little to alter armed group violence because women are subject to the same institutional socialization as their male colleagues. A breadth of research demonstrates that this socialization process induces conformity among both men and women. Moreover, the organizational cultures of militaries and armed organizations – even those that include women – are often replete with hyper-masculine and misogynistic norms that implicitly promote the use of sexual violence.

To date, existing evidence that cuts against the logic of female integration has been largely anecdotal or concentrated in case studies. In recent research, I fill this empirical gap by systematically evaluating the effect of female combatants on conflict-related sexual violence in the 86 civil wars between 1980-2009. Using a unique data set of women’s participation, I find that rape is as likely in conflicts with female-inclusive groups as it is in those with few or no female combatants (Figures 1 and 2). I further find that if we look only at conflicts where rape is used, the presence of female fighters does not impact the severity of sexual violence.

I observe this pattern in conflicts where rebel fighters forcibly recruit their members, as well as in those where membership is largely voluntary. 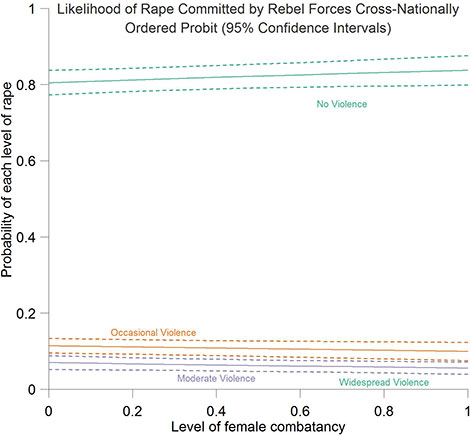 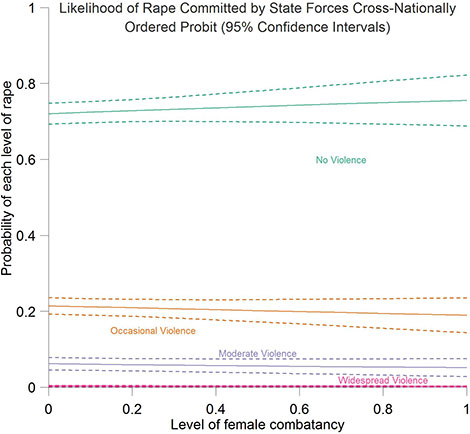 These findings have important policy implications. First, integrating women as an antidote for sexual violence is unlikely to have a substantive impact. Instead, policymakers interested in preventing conflict-related rape should direct their attention to more empirically sound interventions. For example, there is consistent evidence that clear directives from group leadership prohibiting rape lowers the likelihood of sexual violence. Similarly, one recent study suggests that groups with high levels of commander oversight and strong, consistent anti-rape education commit lower levels of sexual violence. From a policy perspective, this means that rape prevention might be most effective through top-down programs that aim to educate, train, and pressure group leaders. Working to make rape undesirable for armed groups instead of focusing on fighter demographics thus appears to be a much more effective strategy.

Finally, these findings suggest that policymakers must take women seriously as violent political actors. Women’s wartime participation is already substantial. I estimate that in almost a quarter of civil conflicts, female fighters represent at least 10 percent of armed combatants. Henshaw finds women combatants in nearly 32 percent of global insurgencies. Women serve in other capacities as well, both in supportive and non-combat roles. Directing our attention to women’s actual wartime experiences will produce more durable counter-insurgent programming, more effective demobilization and reintegration initiatives, and ultimately provide a more accurate assessment of the causes and consequences of conflict-related sexual violence.

Meredith Loken is a PhD candidate in the Department of Political Science at the University of Washington.